Penboyr is a hamlet sat about four miles south-east of Newcastle-Emlyn and four miles south-west of Llandyssul, just south of Llangeler. The church is dedicated to St. Llawddog, and was possibly built on an ancient Roman site. Inside the Church is a simple brass memorial plaque which commemorates the parishioners who fell during both World Wars. The photograph of this memorial was kindly supplied by Raymond Jones. 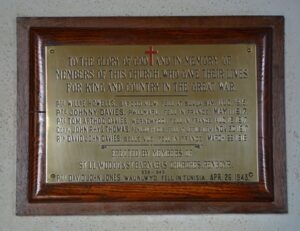 David John Davies, Private, 51866, West Yorkshire Regiment. David was the son of John and Sarah Davies, of Graigwen, Velindre. He resided at Belle Vue, Velindre with his wife Margaret Jane Davies, and their daughter Hannah prior to the war, and enlisted at Cardiff in February 1917. David originally served with the Labour Corps before transferring to the 2/8th Battalion, West Yorkshire Regiment on 28 September 1917, which was attached to 185 Brigade, 62nd (2nd West Riding) Division. The Division had been in France since January 1917, and took part in the Battle of Arras. It fought at Cambrai later that year, before settling down for the winter in the Arras sector. On 21 March 1918 the German Spring offensive hit the area, and the Division was one of several to suffer terrible casualties over the coming days. David was killed on 29 March 1918, aged 33. He has no known grave, and is commemorated on the Arras Memorial, France. 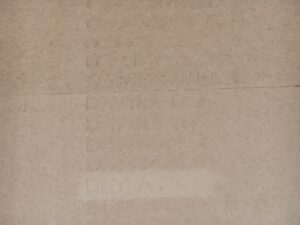 John Davies, Private, 20630, Welsh Regiment. John was the Son of David and Margaret Davies, of Pwllmarl, Velindre. He had married prior to the war, and resided with his wife Hannah Davies, at Brynheulog, Beulah. John enlisted at Ammanford during an early recruiting drive into the 15th Battalion (Carmarthen Pals), Welsh regiment, which formed and trained at Rhyl, before moving to Wiltshire, with 114 Brigade, 38th (Welsh) Division. The Division moved to France in December 1915, and John saw action the following year in the famous assault on Mametz Wood. After the successful capture of the wood, the decimated 38th Division moved to the Boesinghe Sector, north of Ypres. After several months spent consolidating the line at Boesinghe, on the night 29/30 April 1917, the 15th Welsh carried out a successful large scale trench raid on the German lines opposite. John was wounded during the raid, and died on 1 May 1917. He was 22 years old, and is buried at Mendinghem Military Cemetery, Belgium. 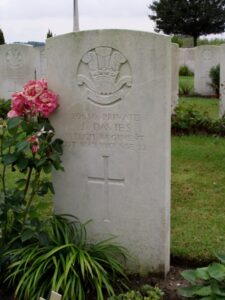 Thomas Arthog Davies, Private, 33348, South Wales Borderers. Thomas was the son of David and Hannah Davies, of Wern Newydd, Cwmpengraig, Henllan. He was an Undergraduate of St. David’s College, Lampeter, and was preparing for the Ministry of Church of England when war disturbed his studies, and enlisted at Aberystwyth into the 2nd Battalion, South Wales Borderers. In April 1917 Thomas went to France to join the battalion, which was attached to 87 Brigade, 29th Division at Arras. The Division soon moved to the Ypres sector, and took part in the Battle of Langemarck. Thomas was killed here on 16 August 1917. He was 26 years old, and is commemorated on the Tyne Cot Memorial, Belgium. 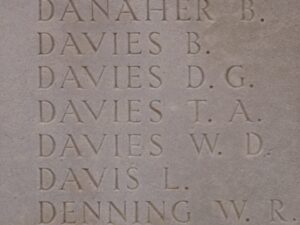 William Howells, Private, 2536, Welsh Regiment. William was the son of Samuel Howells, of Bargoed View, Velindre. He enlisted at Carmarthen into the 1/4th Battalion, Welsh Regiment, which was the local Territorial unit. The battalion was attached to 159 Brigade, 53rd (Welsh) Division, and sailed from Devonport in July 1915 arriving at Mudros on 5 August 1915. From here they moved to Gallipoli, landing on 9 August. Here the Division was immediately thrown into action, and spent the next few days in isolated pockets, fighting against a Turkish counter-attack during the Battle of Sari Bair. William was killed here on 10 August 1915. He was 21 years old, and is commemorated on the Helles Memorial, Gallipoli.

John Jones, Private, 11208, Hampshire Regiment. John was born in Penboyr in 1886, the son of David and Margaret Jones. The family had lived at Newcastle Emlyn for several years before moving to 42, Harriet Street, Trecynon, Aberdare. John enlisted at Cardiff into the 11th Battalion, Hampshire Regiment, which was attached to the 16th (Irish) Division as Pioneers, and during December 1915 the Division moved to France, concentrating in the Bethune area. John was wounded here, and died of wounds on 6 May 1916. He was 30 years old, and is buried at Bethune Town Cemetery, France. John is not commemorated locally. 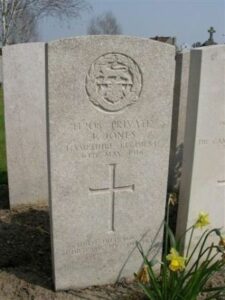 Benjamin John Owens, Private, 40554, Manchester Regiment. Benjamin was born at Penboyr in 1886. He lived at Wrexham prior to the war and enlisted at Chester into the Cheshire Yeomanry. He was later transferred to the 20th Battalion, Manchester Regiment, which was attached to 22 Brigade, 7th Division, joining the battalion at some time in 1916. Benjamin probably saw his first action on the Somme in the summer of 1916, when the division fought at High Wood. During 1917 it moved to Arras, and took part in Battle of Bullecourt. Benjamin was killed at Bullecourt on 4 May 1917, aged 30. He has no known grave, and is commemorated on the Arras Memorial, France. Benjamin is not commemorated on the Memorial. 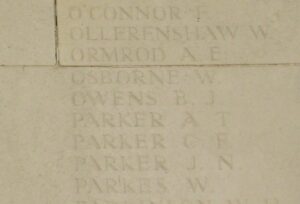 John Rhys Thomas, Private, 355874, Royal Welsh Fusiliers. John was the son of John and Hannah Thomas, of Penlonrhadis, Velindre. He enlisted at Penarth on 8 September 1914 into the South Staffordshire Regiment, but was discharged as medically unfit on 9 June 1915. Undeterred, he re-enlisted into the Welsh Horse Yeomanry, and joined the regiment in Egypt on 14 February 1916. Here the Welsh Horse merged with the Montgomery Yeomanry to form the 25th Battalion, Royal Welsh Fusiliers, which was attached to 231 Brigade, 74th (Yeomanry) Division. In March 1917 the Division began its part of the advance into Palestine, and by November had helped capture Jerusalem. John was killed near Jerusalem on 30 November 1917. He was 23 years old, and is buried at Jerusalem War Cemetery, Israel. 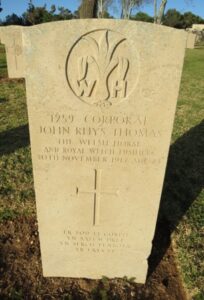 David John Jones, Gunner, 919650, Royal Artillery. David was the son of Daniel and Elizabeth Jones, of Waunlwyd, Velindre, and the husband of Annie Mary Jones, of Wimbledon, Surrey. He served with the 146 (The Pembrokeshire Yeomanry) Field Regiment, Royal Artillery. The regiment embarked for North Africa and landed in Suez in September 1942, joining the Eighth Army in time for the battle of El Alamein as part of the 7th Armoured Division Artillery (the Desert Rats). David was killed during Operation Vulcan on 26 April 1943, aged 31, and is buried in Enfidaville War Cemetery, Tunisia.

Hubert Thomas Jones, Leading Aircraftman, 1279993, Royal Air Force Volunteer Reserve. Hubert was the son of James and Margaret Jones, of Saron, Llandyssul. Nothing is known of Hubert, except that he served with the RAFVR, and died at home on 11 June 1945, aged 22. Hubert is buried at Penboyr (St. Llawddog) Churchyard. He does not seem to be commemorated on any local memorial. 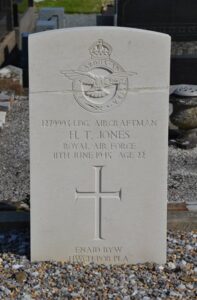