Newcastle Emlyn is an ancient market town, lying on the River Teifi, and straddling the borders of Carmarthenshire and Ceredigion. The town is home to a ruined 13th Century Castle, which is situated to the north of the Teifi. The men of the town who fell during both World Wars are commemorated on a granite column which sits in the Memorial Gardens and is the main war memorial for the town, however there are several others. Holy Trinity Church is the Parish Church for Newcastle Emlyn. The church contains a memorial scroll which names all the men and women of the parish who served, whilst those who fell are marked with a cross. This page commemorates the members of Holy Trinity Church who fell during the Great War. The photographs of the memorials were kindly sent in by Raymond Jones. 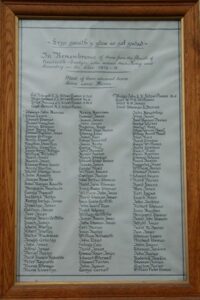 David Rees Davies, Private, 3rd Chemical Warfare Section, U.S. Army. David was born on 24 December 1892, the son of Benjamin and Anne Davies, of Bryndioddef, Newcastle Emlyn. He had served with the Royal Garrison Artillery prior to the war, before emigrating to America aboard the S.S. Lusitania on 21 March 1914. David enlisted in the USA into the 3rd Battalion, Chemical Warfare Service, American Expeditionary Force. He died in the USA on 11 October 1918, aged 25, and is buried at Jerusalem Cemetery, Wales, Waukesha, Wisconsin. The Memorial at Newcastle Emlyn states that David served with the 164th Depot Battalion, Royal Garrison Artillery, but his headstone states 3rd Battalion, Chemical Warfare Service. He is not commemorated by the CWGC or the ABMC. Many thanks to Raymond Jones for identifying David. 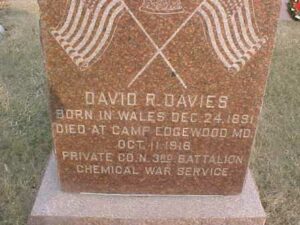 Edward Lloyd Evans, Private, 13059, Welsh Regiment. Edward was the son of Edward and Sarah Ann Evans, of Newcastle Emlyn, and enlisted at Carmarthen into the 9th Battalion, Welsh Regiment. The Battalion was attached to 58 Brigade, 19th (Western) Division, which crossed to France during July 1915, and fought during the opening attack of the Battle of Loos on 25 September. The Division suffered heavy casualties at Loos, and Edward was one of many men drafted into the 9th Welsh to rebuild its strength. During 1916 the division moved to the Somme, and took part in the second wave of the attack on Ovillers-La Boiselle on 1 July 1916 capturing the village at heavy cost. It remained on the Somme, and fought through the Somme Battles of Pozieres and the Ancre in 1916. During 1917 the division moved to positions south of Ypres, and this is where Edward was killed in action on 3 May 1917. He was just 22 years old, and is buried at Vlamertinghe Military Cemetery, Belgium. Edward is also commemorated at Bryngwenith Chapel, Henllan. 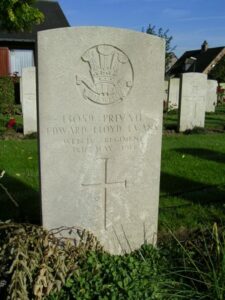 John Kenrick Lloyd Fitzwilliams, MC, Major, Royal Field Artillery. John was born on 13 December 1884, the son of Charles Home Lloyd Fitzwilliams and Margaret Alicia Fitzwilliams (nee Crawford), of Cilgwyn, Newcastle Emlyn. On 7 June 1910 he married Margery Laura Hyde, of Longworth House, Faringdon, Berks. John had been originally commissioned into the Royal Field Artillery, and by the start of the Battle of the Somme he had worked his way up to Captain. John was awarded the Military Cross for his conspicuous gallantry during the Somme Battles, and was also promoted to Major at the same time. His Battery served with the 25th Army Brigade, 1st Division and was taking part in the Advance on the Hindenburg Line when John was killed in action on 30 August 1918. He was 33 years old, and is buried at Vis-En-Artois British Cemetery, Haucourt. John was also the holder of the Order of St Stanislaus, 2nd Class (Russia). His son, Major Anthony John Fitzwilliams Hyde was killed in Normandy on 21 June 1944. John is also commemorated at Llandyfriog. 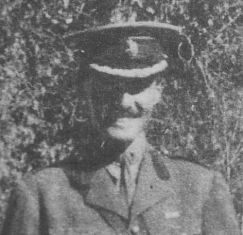 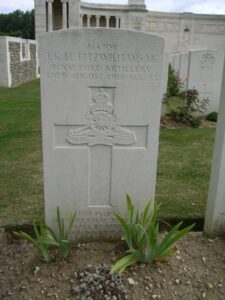 Thomas James Harries, Rifleman, 616, London Regiment. Thomas was the son of Police Serjeant William Harries and of Jane Harries, of Dryslwyn, Newcastle Emlyn. Thomas had lived with his Aunt Elizabeth Wheeler at 11, Cavendish Road, Harringay prior to the war and worked as a Clerk in the Registry Office, G.P.O., London. He enlisted there in September 1914 into the 5th Battalion (Rifle Brigade), London Regiment. In November 1914 the Battalion moved to France, landing at Le Havre. Here they joined 11 Brigade, 4th Division at Bailleul, and spent their first winter in the trenches at Ploegsteert Wood, where they took part in the famous Christmas Truce. They remained here throughout the coming months, and were in the front line when Thomas was shot in the head by a sniper. He died immediately that day, on 15 April 1915, aged just 20, and is buried at Rifle House Cemetery, Belgium, deep within the Wood. He is also commemorated on the Bethel Chapel Memorial at NCE. 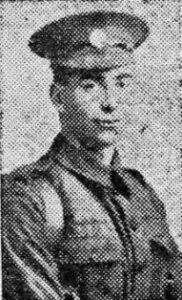 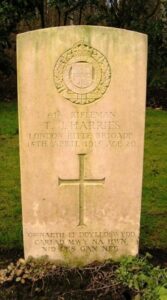 John Howells, Private, 8571, Dorsetshire Regiment. John was born in Newcastle Emlyn in 1880. He resided with his cousin David Roderick at 245, Park Road, Cwmparc, Treorchy prior to the war, and enlisted at Pentre into the Dorsetshire Regiment on 3 September 1914. John landed in France on 18 May 1915 and was posted to the 1st Battalion, Dorsetshire Regiment. The Battalion was attached to 95 Brigade, 32nd Division in December 1915, and the following year took part in the opening of the Somme Offensive, fighting at the Battle of Albert. John was killed in action during the initial attacks of the first day of the Battle of the Somme, on 1 July 1916, aged 36. He is buried at Lonsdale Cemetery, Authille, France. 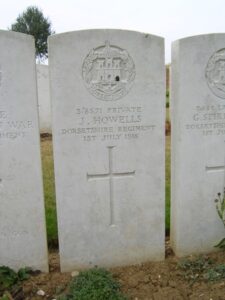 Titus Lewis, Private, 15661, Welsh Regiment. Titus was the son of Thomas and Mary Lewis, of Brynhyfryd, Adpar, Newcastle Emlyn. He enlisted at Neath into the 9th Battalion, Welsh Regiment, which was attached to 58 Brigade, 19th (Western) Division. The battalion moved to France on 18 July 1915, and moved with the division to positions near Loos, where it took part in the opening attack of the Battle of Loos on 25 September 1915. Titus was killed in action during this attack, on 25 September 1915. He was 25 years old, and is buried at Brown’s Road Military Cemetery, Festubert, France. 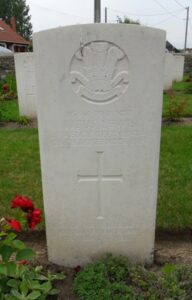 Details on the Memorial

In Remembrance of those from the Parish of

Newcastle Emlyn who served their King and

Most of them returned home 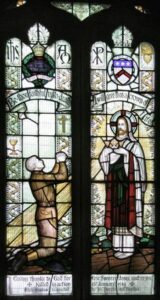 Eric Spencer Jones, Lieutenant, 264500, East Lancashire Regiment. Eric was the son of Evan Spencer-Jones and Margaret L. Spencer-Jones (nee Thornley), of Newcastle Emlyn. After leaving Christ College, he went to Keble College, Oxford, but as soon as he was old enough he enlisted into the Officer Training Corps, before being commissioned as Second Lieutenant into the Royal Armoured Corps on 30 January 1943. He was then posted to the 8th Battalion, East Lancashire Regiment, which formed the nucleus of the 144th Regiment, Royal Armoured Corps. The regiment originally trained with Churchill tanks, but after being forced to hand their tanks over to a Canadian unit, re-equipped with Shermans and a number of Crusaders, before beginning to land in Normandy from 8 June 1944. Eric landed at Normandy with the unit on D-Day plus 3, 9 June, and fought through the epic battles of Normandy, where the regiment came up against the Waffen SS Panzer Unit ‘Schwere SS-Panzer-Abteilung 101’, commanded by Michael Wittman. The famous Panzer Commander was killed during this engagement at Hill 122. Eric survived Normandy, and fought through France into Belgium and Holland with the Division. In December 1944 the Germans launched a desperate attack in the Ardennes, known as the Battle of the Bulge, and British Units were rushed to plug the gaps in the lines of the US Forces in the area. Eric was killed in action during the Battle of the Bulge, on 13 January 1945, aged just 22, and is buried at Hotton War Cemetery, Belgium. 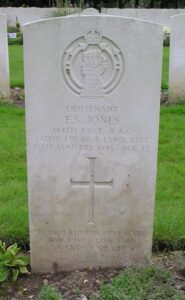