Nantgaredig is a sprawling village that lies on the A40 road between Carmarthen and Llandeilo, about six miles east of Carmarthen, on the junction of the B4310 road. It is a rural village, surrounded by rolling green farmland on the west bank of the River Towy. The men of the village who fell during both World Wars are commemorated on a marble war memorial obelisk, which is situated in front of Nantgaredig Methodist Chapel. The photographs of the memorial were kindly supplied by Dai Phillips. 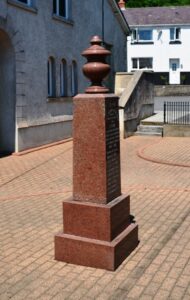 Thomas Benjamin Daniel, Guardsman, 1933, Welsh Guards. Thomas was the son of Herbert and Elizabeth Daniel, of the Post Office, Nantgaredig. He worked as a Draper’s Assistant at Carmarthen prior to the war. In February 1915 he enlisted into the 1st Battalion of the newly formed Welsh Guards. The Welsh Guards sailed for France in July 1915, joining the 3rd Guards Brigade, Guards Division. The Welsh Guards saw their first action during the Battle of Loos in September 1915, then spent the winter at Ypres before moving back to the Somme in the summer of 1916. The Guard then took part in the Battle of Flers-Courcelette, which was a part of the main Somme offensive. Thomas was killed in action here on 10 September 1916, aged 22. He is buried in Delville Wood Cemetery, Longueval, France. His brother D. J. Daniel, of Nantgaredig, survived him. 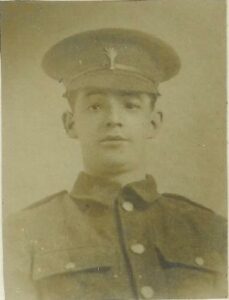 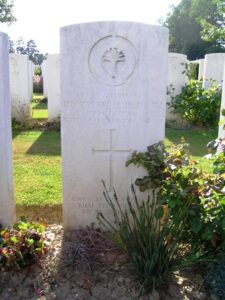 Benjamin Evans, Private, 13461, South Wales Borderers. Benjamin was the son of Benjamin and Bridget Evans, of Tynewydd, Nantgaredig. Benjamin enlisted at Newport Gwent, into the 1st Battalion, South Wales Borderers, which was attached to 3 Brigade, 1st Division. The division had fought in France since the beginning of the Great War, and in early 1918 was in Flanders. On 21 March 1918, the Germans launched Operation Michael, known as the Kaiserschlacht. This was their last chance to win the war before the growing American Expeditionary Force could be lined up against them. In early April 1918, the 1st SWB were helping in a desperate defence of the Allied lines, when Benjamin was wounded. He was taken to the Military Hospital at Étaples, where he succumbed to his wounds on 13 April 1918, aged 24. Benjamin is buried in Étaples Military Cemetery, France. 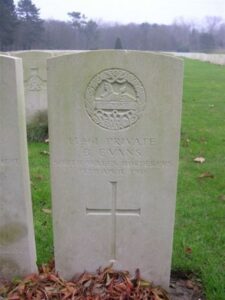 Isaac Evans, Private, 125761, Machine Gun Corps. Isaac was born in 1898, the son of Jenkin and Margaret Evans, of Soar, Cilcennin. His mother had been widowed by 1911, and Isaac went to live at Nantgaredig, near Carmarthen, with his sister Margaret and her husband David Samuel Roberts (see below). He enlisted in Carmarthen into the Monmouth Regiment, service number 47023. Isaac would have been a machine gunner, and when the Machine Gun Corps were formed in 1916, he transferred into the 6th Battalion, Machine Gun Corps, who formed part of the 6th Division. In the spring of 1918 the Division was one of those hit by the German Offensive on the Somme, which had been launched on 21 March, and the Division took part in the Battle of St Quentin. They were moved from the line, and went to Flanders to rest, but the following month the Germans launched another offensive on the Lys, and the Division fought during the Battle of Bailleul, and the First and Second Battles of Kemmel. Isaac was wounded near Kemmel, and died of wounds on 20 July 1918, aged 19. He is buried at Le Quesnoy Communal Cemetery. He is not commemorated at Nantgaredig, but at his home village of Cilcennin. 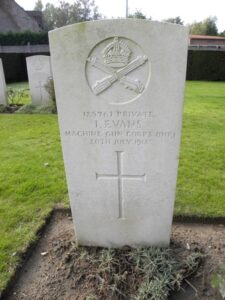 William Jones, Private, 4603, Pembroke Yeomanry. William was born at Manachdu Farm, Nantgaredig in about 1888. He enlisted into the Pembroke Yeomanry at Carmarthen on 14 November 1914 and moved with the Yeomanry via Hereford to the Norfolk Coast. He was not in khaki long, as on 7 January 1915 he was discharged after being deemed as not likely to become an efficient soldier, and died in hospital at Newport, Monmouthshire, on 4 December 1915, aged 27. He is buried in Newport (Christchurch) Cemetery. He does not appear to be commemorated locally.

David Idwal Morris, Private, 57145, Welsh Regiment. David was the son of Jared and Elizabeth Morris, of Capel Dewi Issaf, Carmarthen. He enlisted at Nantgaredig into the Pembroke Yeomanry, with the service number 5119. David transferred into the 16th Battalion, Welsh Regiment, which formed part of 115 Brigade, 38th Welsh Division, which moved to France during December, 1915. The Division saw their first action at Armentieres, but were moved south to the Somme sector, tasked with the capture of Mametz Wood. After suffering severe losses in capturing the strongly defended wood, the Division moved to Ypres to rebuild. David joined the battalion here in August 1916. At Ypres, the Division took part in the Battle of Pilckem Ridge on 31 July 1917. Elements of 114 Brigade remained in the line to aid the 20th (Light) Division during their attack on Langemarck. It was during an abortive assault near Eagle Trench, Langemarck, that David was Killed in Action on 27 August 1917. He was 21 years old, and is commemorated on the Tyne Cot Memorial. 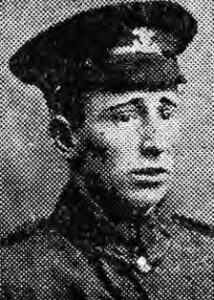 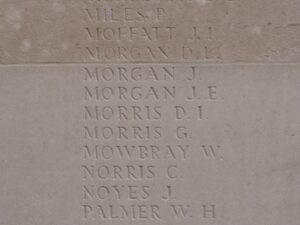 Lloyd Owen Lloyd Price, Rifleman, R/5798, King’s Royal Rifle Corps. Lloyd was born around 1885 in Abergele, North Wales, to Meredydd and F. M. Lloyd Price. His family moved to Bryncothi. When war broke out, Lloyd was in Rhodesia. He returned to Britain to enlist, and joined the 2nd Battalion Kings Royal Rifle Corps in London. The Battalion formed part of 2 Brigade, 1st Division, and fought in France from the outset of war. They fought the tremendous rearguard actions of Mons, Le Cateau and ended up on the Marne, where the Germans were held firm. The Division then moved North to the Loos- Armentieres Sector, where they took part in the First Battle of Loos in early 1915. It was during this horrific series of Battles that Lloyd lost his life, when he was killed in action on 10 January 1915. He is remembered on the Le Touret Memorial, Richebourg L’Avoue, France. Lloyd is commemorated at Abergorlech, but not at Nantgaredig. 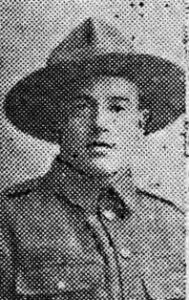 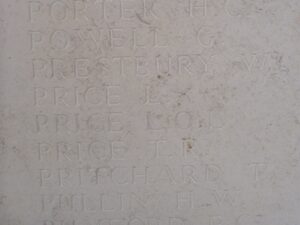 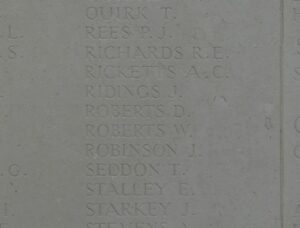 John Thomas, Private, 14659, Dorsetshire Regiment. John was born in Nantgaredig, probably in 1888. He later resided at Treherbert, and enlisted at Pentre into the Duke of Cornwall’s Light Infantry. At some stage John was transferred to the 1st Battalion, Dorsetshire Regiment, which was attached to 15 Brigade, 5th Division, and landed in France on 6 May 1915. The division moved to the southern Somme sector, taking over positions from the French. John was killed in action on 20 November 1915, aged 27, and was buried in Carnoy Military Cemetery, France. 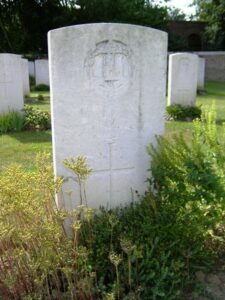 David Harold Harries, Sergeant, 1377756, Royal Air Force Volunteer Reserve. David was the son of Thomas and Annie Maria Harries of Penllwynau, and the husband of Joyce Lilian Harries, of Bromley, Kent. David served as a Wireless Operator/ Air Gunner with the Royal Air Force Volunteer Reserve, and was posted to 487 (R.N.Z.A.F.) Squadron, which was equipped with the Lockheed Ventura II, based at RAF Feltwell in Norfolk. Operations began during December 1942, with their first raid during daylight on the Philips factory at Eindhoven. The Squadron suffered heavy losses, with David being one of the men killed when his Ventura was brought down near Eindhoven on 6 December 1942. He was 31 years old, and is buried at Eindhoven (Woensel) General Cemetery.