Mynyddcerrig is a small village located about six miles south-east of Carmarthen and to the south of the A48 main road between Carmarthen and Cross Hands. The men of the village who fell during both World Wars are commemorated on a marble plaque in the village, which was originally situated in the Mynyddcerrig Primary School. When the school closed the memorial was relocated to a location near the Council Estate in Mynyddcerrig. The photograph of the memorial has been kindly sent in by Terry Davies, MBE. 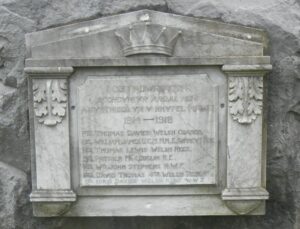 Thomas Davies, Private, 2042, Welsh Guards. Thomas was the son of Benjamin and Mary Davies, of Robusson Cross, Milford. He resided at Pontyberem prior to the war, and enlisted at Carmarthen into the 1st Battalion, Welsh Guards. The battalion formed on 26 February 1915, and moved to France, where it joined 3rd Guards Brigade, Guards Division. They saw their first major action during the Battle of Loos on 25 September 1915, remaining in the area during the coming months, where they also fought in the subsequent Action of Hohenzollern Redoubt. In July 1916 the Division moved to the Somme, where they fought at the Battle of Flers-Courcelette. Thomas was wounded here, and died on 19 September 1916. He was 39 years old, and is buried at Grove Town Cemetery, Méaulte, France. He is also commemorated on the Pontyberem memorial. 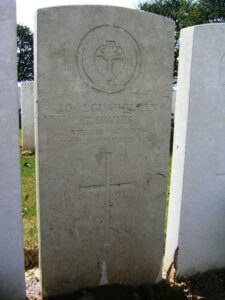 William James, DCM, MM, Corporal, 1728, East Surrey Regiment. William was the son of James and Ann James, of Bryncrwn, Mynyddcerrig. He enlisted at Tumble into the East Surrey Regiment on 6 September 1914, but was discharged as medically unfit. Undeterred he re-enlisted at Shoreham into the 8th Battalion, East Surrey Regiment, which was attached to 55 Brigade, 18th (Eastern) Division.  The Division moved to France in May 1915, and saw its first major action in the Battle of Albert in July 1916. The Division fought throughout the Somme offensive, and in March 1917 followed the German Retreat to the Hindenburg Line. In 1917 the Division took part in the Third Battle of the Scarpe, which was part of the Arras Offensive, then moved to Ypres, where it took part in the Battles of Pilckem, Langemarck, and at the First and Second Battles of Passchendaele. In 1918 the Division were stationed south of the Somme, and were one of the Divisions hit there by the German Spring Offensive, which was launched on 21 March 1918, and fought a heroic rearguard action towards Villers-Bretonneux. William was killed on the Somme on 4 April 1918, aged 25. He is commemorated on the Pozieres Memorial, France. William was an extremely brave man, who was awarded the Distinguished Conduct Medal and the Military Medal during his time at war. He is also commemorated on the Pontyberem memorial. 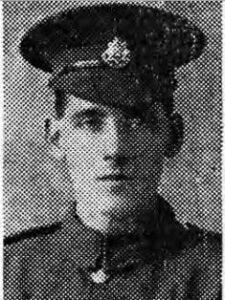 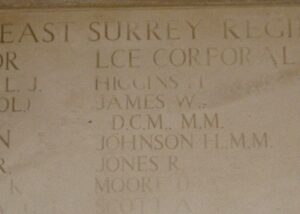 Thomas James Lewis, Private, 509, Welsh Regiment. Thomas was the son of Joseph and Ann Lewis, of Brynhawddgar, Mynyddcerrig. He worked at the Old Castle Tinplate Works in Llanelli prior to the war. Thomas enlisted at Carmarthen into the 1/4th Battalion, Welsh Regiment, which was formed during August 1914 in Carmarthen. The Battalion was then attached to 159 Brigade, 53rd (Welsh) Division, and in July 1915 sailed from Devonport for Egypt. On 9 August 1915 the division had moved from Egypt, and landed on Gallipoli. The next few days were chaotic, with small scale battles raging around the Peninsula, and Thomas was killed in action on 12 August 1915. He was 23 years old, and is remembered on the Helles Memorial, Gallipoli. He is also commemorated on the Pontyberem memorial and on the Old Castle Tinplate Works Memorial. 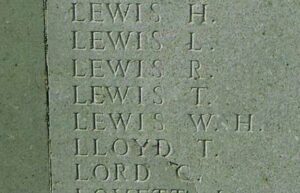 Patrick McLoughlin, Sapper, 66818, Royal Engineers. Patrick was born on 16 August 1876, the son of Christopher and Margaret McLoughlin, of Main Street, Longford, Ireland. By 1911 Patrick had moved to Cilrhedyn, Pontyberem, with his wife Hannah McLoughlin, and son Christopher. He enlisted into the Royal Engineers, and served with their 36th Airline Section. It is probable that the Airline Sections worked in conjunction with the Tunnelling Companies, and so Patrick was on the Somme in late 1916, where the Tunnelling Companies were driving mines under High Wood. Patrick was killed in action on the Somme on 10 September 1916, aged 40, and is buried at Bertrancourt Military Cemetery, France. He is also commemorated on the Pontyberem memorial. 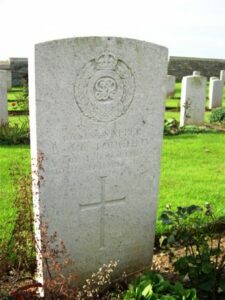 William John Stephens, Private, 13032, Royal Welsh Fusiliers. William was the son of Thomas and Catherine Stephens, of Wern Farm, Llanddarog. He enlisted at Tumble into the 9th Battalion, Royal Welsh Fusiliers, which moved to France in July 1915 attached to 58 Brigade, 19th (Western) Division. The Division moved to positions on the northern end of the Loos Sector, and on the opening of the Battle of Loos, made a brave but disastrous attack on the German lines, incurring heavy casualties. William was one of many men of the 19th Division killed on the opening day of the battle, 25 September 1915. He has no known grave, and is commemorated on the Loos Memorial, France. He is also commemorated on the Pontyberem memorial. 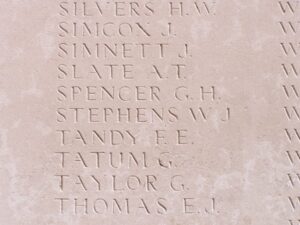 David Thomas, Private, 32295, East Lancashire Regiment. David was the son of John and Mary Thomas of Garn Ffrwd, Mynyddcerrig. He enlisted at Cardiff into the 2/1st Monmouthshire Regiment, which were attached to 205 Brigade, 68th Division. The Division remained in the UK on Home Service for the duration of war, but David transferred to the 1st Battalion, East Lancashire Regiment, which had been in France since 22 August 1914 attached to 11 Brigade, 4th Division. They had fought at Le Cateau, the Marne and the Aisne, and also at Messines in 1914 where they took part in the famous Christmas Truce. In 1915 they fought at Second Ypres, and in 1916 at Albert and Le Transloy during the Somme Offensive. Spring 1917 saw them at Arras, where they fought at the Battles of the Scarpe, and they then moved to Ypres, where they fought in the Battle of Polygon Wood, and at Broodseinde, where David was killed in Action on 4 October 1917 aged 30. He is remembered on the Tyne Cot Memorial, Belgium. He is also commemorated on the Pontyberem memorial. 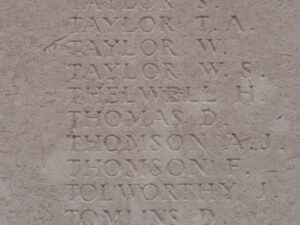 Idris Davies, Corporal, 3976296, Welch Regiment. Idris was the son of David Beynon Davies and Jane Davies of Llanwrcwrt, Pontyberem. He married Rachel Sarah Gibbon, of Llwynhenry, Llanarthe, in 1941. Idris served in the 4th Battalion, Welch Regiment, the local Territorial Battalion, which was attached to the 53rd (Welsh) Division. The Division spent much of the war on home service, first in Northern Ireland, then in southern England and landed at Arromanches at the end of June 1944. The division then fought through the Battle of Normandy, taking part in the drive through northern France into Belgium, and through Holland in 1944. Idris was killed in action during the Battle of s’Hertegonbosch on 24 October, 1944. He was 32 years old, and was buried the following day at Uden War Cemetery. Idris is also commemorated on a war memorial at Llanddarog.