Myddfai is a small village situated about four miles south of Llandovery, in the Brecon Beacons. The men of the village who fell during the Great War are commemorated on a marble plaque, which is set into the wall of St. Michael’s Church, and the fallen of WW2 are commemorated on a separate plaque inside the Church. There is also another plaque inside the Church which commemorates Sgt T. C. Jones, whose Lancaster crashed in the area during WW2. The photographs of the Great War memorial were kindly sent in by Rob Adams, and the other memorials by Mike Berrell. 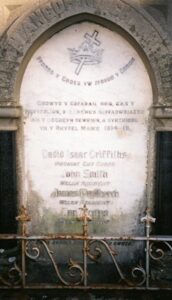 David Isaac Griffiths, Corporal, 46134, Machine Gun Corps. David was the son of David Griffiths, of Goleugoed, Llangadock. He left the village to join the London and Provincial Bank in London, before transferring to their Aberdare Branch. At the outbreak of war he enlisted at Aberdare into the Oxfordshire & Buckinghamshire Light Infantry, where he became a Battalion Machine Gunner. The Machine Gun Corps was created by Royal Warrant on 14 October 1915, and David, as a battalion machine-gunner, transferred into the 8th Company, Machine Gun Corps, which was attached to the 3rd Division; in time to take part in the opening battle of the Somme Offensive the Battle of Albert. The division saw heavy fighting during the opening of the offensive, and later fought at the Battle of Bazentin, where they captured Longueval, and advanced on to Delville Wood. In November the Division fought at the Battle of the Ancre, and saw the Somme Offensive out to a close. In the following year, the Battle of Arras was launched, and the 3rd Division fought at the Battle of the Scarpe. This is where David was killed in action on 10 April 1917, aged 25. He is remembered on the Arras Memorial, France. Photograph courtesy of Malcolm Ferguson-Thomas. 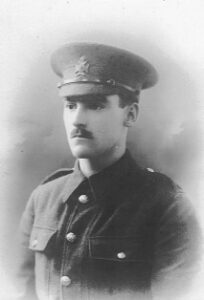 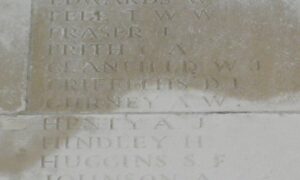 James Prytherch, Private, 54383, Welsh Regiment. James was the son of Rees and Elizabeth Prytherch, of Blaenydw, Myddfai. He enlisted at Carmarthen into the Welsh Regiment. At some time in 1917 he was posted to France, joining the 15th Battalion, Welsh Regiment, which was known as the Carmarthen Pals battalion, attached to 114 Brigade, 38th (Welsh) Division. The Division was at Ypres, in positions along the Boesinghe Canal bank and on 31 July 1917 launched its famous assault on the strongly defended Pilckem Ridge, capturing their objectives within days. After Third Ypres, the Division moved to the Armentieres area, where it remained until moving to the Somme, to a position North of Albert, where it reinforced the badly depleted British forces defending the route to Amiens. The tide of war was turned on 8 August, following the defeat of the German Army at the Battle of Amiens. From then on, the Allies held the offensive, and it was during the push over the old Somme Battlefield, during the Second Battle of Bapaume, that James was killed in action, on 9 September 1918, aged 28. He is remembered on the Vis-En-Artois Memorial, Haucourt, France. 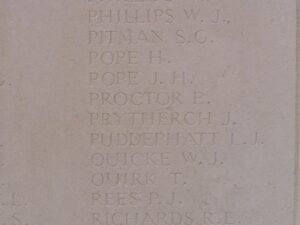 James Smith, Private, 14297, Welsh Regiment. James was born in Hull, but resided at Myddfai prior to the war. He enlisted at Cardiff into the 9th Battalion, Welsh Regiment, which was attached to 58 Brigade, 19th Division, and landed in France on 18 July 1915. James was probably wounded during the Battle of Loos on 25 September 1915, and after recovering was posted to the 15th Battalion, Welsh Regiment, which was attached to 114 Brigade, 38th (Welsh) Division. The Division had spent their first winter in the trenches near Armentieres. In June they marched south to the Somme, where they were tasked with the capture of Mametz Wood. The attack on the wood began on 7 July 1916, but met with fierce resistance, and it took until 11 July to clear the wood. The Division suffered terrible casualties at Mametz, and were taken out of the line, and moved to Ypres to rebuild. The Division took up positions along the Boesinghe Canal bank and on 31 July 1917 launched its famous assault on the strongly defended Pilckem Ridge, capturing their objectives within days. James was killed in action during the Battle of Pilckem Ridge on 4 August 1917, and is remembered on the Ypres (Menin Gate) Memorial, Belgium. 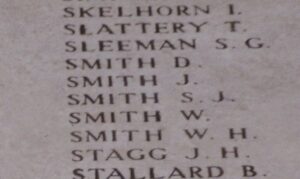 Dan Thomas, Private, 203471, Welsh Regiment. Dan was born at Eglwysfair-Y-Churig around 1884, the son of James and Hannah Thomas, Tailor and Draper, of Parky Llain Isha, Eglwysfair. He resided at Penybryn, Cross Hands prior to the war, with his wife Gwenllian Thomas, and he worked as a Stoker at the Cross Hands Colliery. Dan enlisted at Llanelli into the 11th Battalion, Welsh Regiment, which was attached to 87 Brigade, 22nd Division. The Division crossed to France in early September 1915, with all units being concentrated near Flesselles by 9 September, but after just two months in the trenches, were sent to Salonika, completing concentration there in November 1915. The Division then remained in the Salonika theatre, where it fought a wretched campaign against the Bulgarians. Dan was killed in action during the Second Battle of Doiran on 18 September 1918. He was 35 years old. Dan has been forgotten for almost 94 years, but after forwarding evidence about him to the CWGC in January 2012, Dan has today, Tuesday 22 March 2012, been accepted for commemoration by the CWGC, who will be adding his name to the Addenda Panel of the Doiran Memorial, Greece. The reason for Dan being forgotten is relatively simple, as on the same day another Private D. Thomas in the same Battalion was killed. This man was Private David Thomas, of Bangor, North Wales, and his number was 203441, very similar to Dan’s.

David Williams, Private, 53982, Royal Welsh Fusiliers. David was the son of John and Margaret Williams of 1 Vicarage Road, Trecastle, Brecon. He was residing with his wife Mary Williams at Myddfai prior to the war and enlisted at Brecon into the South Wales Borderers. David was posted to France in 1916, and transferred to the 1st Battalion, Royal Welsh Fusiliers, which was attached to 22 Brigade, 7th Division. The Division had been in France since the First Battle of Ypres in the winter of 1914, and in 1915 had fought at Loos. Their next major action was during the opening of the Somme Offensive, and the division captured Mametz Village on 1 July 1916. After a brief rest, the division returned to the line after the capture of Mametz Wood, and fought at Delville Wood and Guillemont. It was in the Ancre Valley for the winter of 1916/17 when David was killed in action on 26 February 1917, aged 32. He is remembered on the Thiepval Memorial, France. 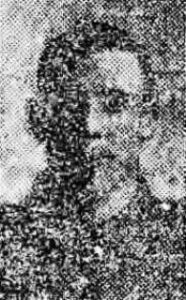 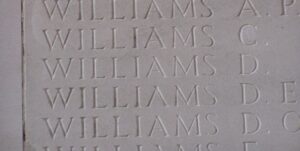 Frederick Iryl Price, Private, 14215427, South Staffordshire Regiment. Frederick was the son of John and Catherine Ann Price, of Llangadog, Carmarthenshire. He served with the 1st Battalion, South Staffordshire Regiment. The battalion was sent to the Far East early in 1944, to serve as an airlanding unit with the Chindits, and were landed behind Japanese lines in Burma in March 1944, where they were used to delay Japanese reinforcements which were attempting to stem the British advance in Burma. Frederick died in the Burmese Jungles on 12 June 1944. He was 20 years old, and is commemorated on the Rangoon Memorial, Myanmar. 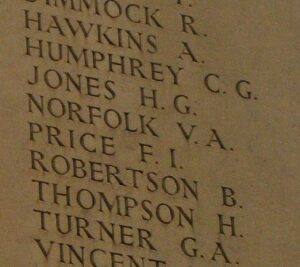 Thomas William Rogers, First Officer, Air Transport Auxiliary. Not much is known of Thomas, except that he lived at Blaencwm and served with the Air Transport Auxiliary. He was killed while flying a Blackburn Botha I, Serial W5103 which crashed during bad weather near Glossop, Derbyshire, while being ferried from the Blackburn factory near Leeds to Hawarden on 10 December 1941. He was 24 years old and is buried at Myddfai (St. Michael) Churchyard. 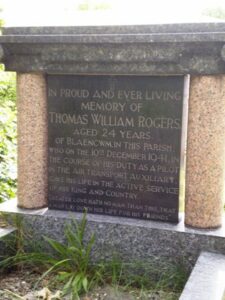 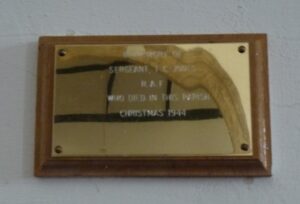 Trevor Charles Jones, Sergeant (Flight Engineer), 1837048, Royal Air Force Volunteer Reserve. Trevor was the son of Mr. and Mrs. E. J. Jones, of Hucclecote, Gloucestershire. He served as a Flight Engineer with 166 Squadron, Royal Air Force, which had been reformed in January 1943, at R.A.F. Kirmington, in Lincolnshire, as a heavy bomber squadron, flying Wellingtons and Lancasters. On 9 December 1944, Trevor was taking part in a navigational training flight, when the aircraft encountered severe turbulence above Myddfai. He was injured whilst parachuting from the aircraft and died that same day, aged 19. The other three men aboard bailed out safely. Trevor was buried at Hucclecote (Ss. Philip And James) Churchyard, Gloucestershire, and is commemorated on a small brass plaque inside Myddfai Church.