Meidrim is a small village which lies about two miles north of St. Clears, and eight miles west of Carmarthen, on the River Dewi Fawr. I have no photographs of any memorials from Meidrim, so the details below are taken from the roll of names published in the 1922 Carmarthen County War Memorial Roll. Photographs of any of the local war memorials would be most welcome.

Herbert Birchell, Private, 200461, Welsh Regiment. Herbert was born at Dudley in 1888. By 1901 he was a prisoner at Dudley Police Station, and by 1911 was residing at Pantyderry, Meidrim where he worked as a farm labourer. Herbert enlisted at Carmarthen into the 1/4th Battalion, Welsh Regiment, which was attached to 159 Brigade, 53rd (Welsh) Division. The division sailed for the Mediterranean in July 1915 and landed at Suvla Bay on 8 August 1915. Herbert survived the Divisions ordeal at Gallipoli, and was evacuated with them during December 1915, moving to Egypt. The Division then fought in Palestine, and it was there, during the First Battle of Gaza, that Herbert was killed in action on 26 March 1917, aged 28. He is remembered on the Jerusalem Memorial, Israel. 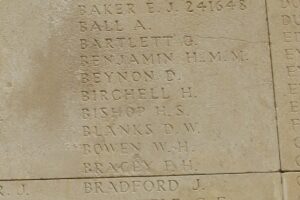 David Davies, Private, 202484, Welsh Regiment. David was the son of John and Anna Davies, of Bryneglur, Meidrim. He was employed by D. Davies, Llain, Penybont prior to the war and enlisted at Carmarthen into the army. David was posted to the 18th Battalion, Welsh Regiment, which was attached to 119 Brigade, 40th (Bantam) Division. In June 1916 the Division landed in France, and saw action during the Somme Offensive that year. During 1917 they fought at Third Ypres and Cambrai. The Division remained in the Cambrai sector over the winter of 1917-1918, and were caught up in the German Spring Offensive of 21 March 1918. David was killed in action during desperate fighting on 24 March 1918. He was 20 years old, and is remembered on the Arras Memorial, France. 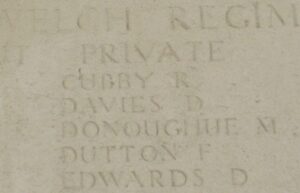 John Davies, Corporal, 33471, Royal Army Medical Corps. John was born at Meidrim, the son of David and Sarah Davies. The family later resided at 15, Prospect Place, Ogmore Vale, Bridgend. John worked as a coal hauler before enlisting at London into the Royal Army Medical Corps, and was posted to the 1st Stationary Hospital, which was situated at Le Mans from September to October 1914. It remained at Rouen for the duration of the war. It is not known what happened to John, but he died of wounds on 21 October 1916, at Rouen, aged 29, and is buried at St. Sever Cemetery, Rouen, France. 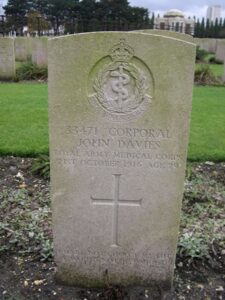 Thomas Davies, Private, 54494, Welsh Regiment. Thomas was the son of Benjamin and Sophia Davies, of Meidrim. He worked as a Mason with his father prior to the war and enlisted at Carmarthen into the army. Thomas was posted to France in 1917, joining the 9th Battalion, Welsh Regiment, which was attached to 58 Brigade, 19th (Western) Division. The Division had been in France since July 1915, and had taken part in the Battle of Loos on 25 September 1915. They moved to the Somme the following year, and took part in the capture of La Boiselle on 1 July 1916, fighting on the Somme throughout the offensive, before moving to Flanders in 1917, and taking part in the Battle of Messines, and in Third Ypres. The Division was then transferred to a peaceful sector near Cambrai, but on 21 March 1918 the German Spring Offensive was launched here, and the 19th Division were caught in the thick of the action, suffering heavy casualties over the coming days, before being moved to positions near Ploegsteert to rebuild. Unfortunately, a fresh German offensive was launched on the Lys on 9 April 1918, and the Division again saw heavy fighting. Thomas was killed in action around Messines on 16 April 1918, aged 23. He has no known grave, and is remembered on the Tyne Cot Memorial, Belgium. 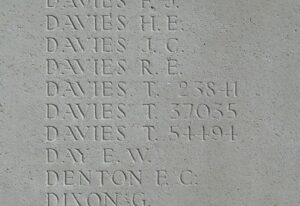 Howell Griffiths, Private, 35098, Welsh Regiment. Howell was born in Meidrim in 1888, the son of Henry and Margaret Griffiths. He worked at Gower prior to the war and married Charlotte Mary Hopkins in 1912. He enlisted at Swansea into the army, and was posted to the 13th Battalion, Welsh Regiment, which was attached to 114 Brigade, 38th Welsh Division. The Division had arrived in France in December 1915 and were posted to a peaceful sector near Fleurbaix to gain experience. In June 1916 the Division marched south to the Somme, where they successfully captured Mametz Wood between 7 and 11 July 1916. Howell was wounded at Mametz Wood, and was brought to Bristol Hospital, where he died of wounds on 25 July 1916, aged 27. He is buried in Penclawdd (St. Cynwydd) Churchyard. Charlotte later remarried, and resided at White Walls, Dunvant, Swansea.

William John Jones, Gunner, 214419, Royal Field Artillery. William was the son of David and Anne Jones, of Gelly, Meidrim. He enlisted at Preston into the Royal Field Artillery, and was posted to France, joining ‘B’ Battery, 250th Brigade, Royal Field Artillery, which was attached to the 50th (Northumbrian) Division. The Division took part in the Second Battle of Ypres from April to June 1915. During 1916 the division fought during the Somme offensive, before moving to Arras the following year. The division fought at the Second Battle of the Scarpe, before being sent north again to Ypres, taking part in the Second Battle of Passchendaele. During March 1918 it was stationed near St. Quentin, and was hit here by the German Spring Offensive of 21 March 1918, suffering terrible casualties. The division moved north to Flanders to rest and rebuild, but in April the Germans launched an attack in Flanders, around the Lys, and the Division took part in heavy fighting again, before beings sent to the quieter Aisne sector to rest.  This was unfortunately not the case, as the Division was hit hard by a surprise enemy attack in May 1918. William was killed in action on 27 May 1918, aged only 22, and is buried at La Ville-Aux-Bois British Cemetery, France.

David Edward Lewis DCM, Corporal, 86350, Royal Engineers. David was born at Aberdare, the son of John and Anne Lewis. The family later moved to Meidrim. David married Lillian Mary Underwood, of St. Nicholas Rectory, Hereford in June 1916. David enlisted at Liverpool into the Welsh Regiment, but later transferred into the 170th Tunnelling Company, Royal Engineers. The Tunnelling Companies had been formed with the aim of digging underneath the German lines, and placing huge quantities of explosives, or ‘Mines’ underneath, which would be set off prior to an infantry attack. David was in the Loos area in the Summer of 1917, when he was killed in action on 26 September 1917, aged 35. He is buried at Noeux-Les-Mines Communal Cemetery Extension, France. 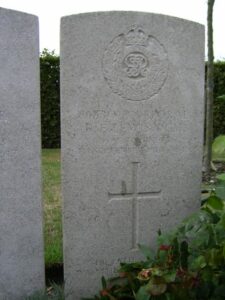 Job Lewis, Private, 37841, Leicestershire Regiment. Job was the son of Edward and Esther Lewis, of Garreglwyd, Meidrim. He resided at 72, Lower Thomas Street, Merthyr prior to the war and enlisted there on 25 February 1916 into the army. On 16 January 1917 Job was posted to France, joining the 1st Battalion, Leicester Regiment, which was attached to 71 Brigade, 6th Division. The division had fought on the Somme in 1916, before moving north to Arras, where they fought at the Battle of Hill 70. Job was mortally wounded during the Battle of Hill 70, and died of his wounds that day, on 23 April 1917. He was 24 years old, and is remembered on the Loos Memorial, France. 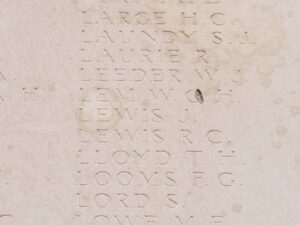 Thomas Walters, Private, T/312433, Army Service Corps. Thomas was the son of Thomas and Hannah Walters, of Rhyd, Aberwern, Meidrim. He married Mary B. James in 1913, and the couple resided at Brynteg, Tegryn, Llanfyrnach. Thomas enlisted at Bath on 24 June 1916 into the Army Service Corps. Thomas was posted to France the following year, and worked as a Packer and Loader. He took ill soon after arriving at the front and died of meningitis at No 2 General Hospital, Le Havre on 13 May 1917, aged 26. He is buried at Ste. Marie Cemetery, Le Havre, France. 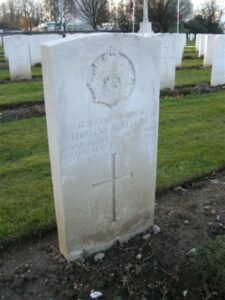 Gwilym White, Private, 74010, Welsh Regiment. Gwilym was the son of William and Elizabeth White of Llanelli. He married Maggie Bronwen Davies, of 21, Ann Street, Llanelli, on 28 October 1914 and the couple lived at Meidrim. Gwilym enlisted into the army on 7 May 1917, and in the summer of 1918 was posted to France, where he joined the 15th Battalion, Welsh Regiment, which was the Carmarthen Pals battalion, attached to 114 Brigade, 38th (Welsh) Division. The Division had just began their assault on Thiepval Ridge and Pozieres when Gwilym joined them, and he took part in their advance towards the Hindenburg Line. It was during the Battle of Epehy that Gwilym was killed in action, on 19 September 1918, aged 24. He is remembered on the Vis-en-Artois Memorial, France. 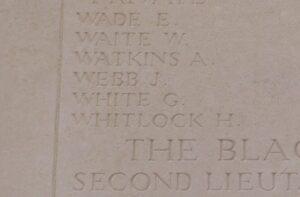 Gwilym Williams, Second Lieutenant, Royal Welsh Fusiliers. Gwilym was born on 18 March 1890, the son of William and Esther Williams, of Nantyraf, Meidrim. He was educated at Carmarthen Grammar School and at Aberystwyth University before becoming assistant Master at Queen Mary’s Grammar School, Walsall. In August 1915 Gwilym was commissioned into the 17th Battalion, Royal Welsh Fusiliers. The battalion moved to France during December 1915 attached to 115 Brigade, 38th (Welsh) Division, and took up positions around Fleurbaix, to gain experience. The Division arrived in France in December 1915, and were posted near Armentieres, where they were familiarised with trench warfare. Gwilym joined the battalion at Fauquissart on 24 April 1916. He was in the front line on 20 May 1916 when he was wounded by a German rifle grenade, and was brought to the Hospital at Merville, where he died the following day, on 21 May 1916. Gwilym was 26 years old, and is buried at Merville Communal Cemetery, France. He was a well known Bard, having won four Bardic chairs. 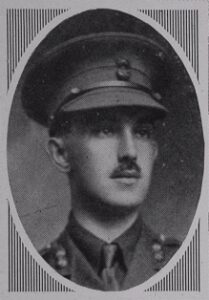 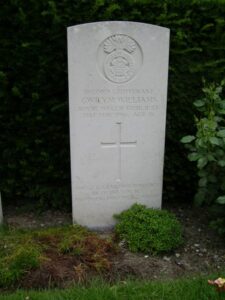 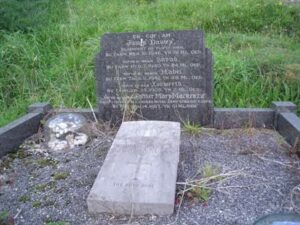