Llanycrwys is a community in Carmarthenshire, which is situated near the River Cothi, one and a half miles north of the A482 road between Pumsaint and Cwmann. The community is bordered by the communities of Cynwyl Gaeo and Pencarreg, both being in Carmarthenshire; and by Llanfair Clydogau in Ceredigion. The men of Llanycrwys Parish who fell during the Great War, plus those who served and returned, are commemorated on the Llanycrwys Parish War Memorial. The memorial was unveiled by Mr John Hinds, MP, on 12 January 1921 and was situated on a T-Junction in the centre of the village of Ffaldybrenin. The names of the men and women who served during World War Two were added to the memorial after the end of the latter was. The memorial appears to have been hit by a lorry some years ago. It has since been rebuilt, and has been erected out of harms way on a small piece of land next to the junction. 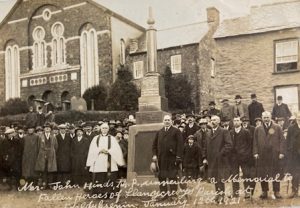 Private Alfred Evans, 2754, Welsh Guards. Alfred was born at Llanycrwys on 14 June 1894, the son of Jenkin and Rachel Evans, later of 14, Rock Terrace, Aberaeron. He was educated at Lampeter, and later worked as an Agricultural Labourer, before enlisting in the Welsh Guards on 18 May 1916. Alfred missed the Somme Battles of 1916, as he didn’t arrive in France until December 1916, but he arrived on the Western Front in time to join the 1st Battalion at St. Quentin. He was wounded just three months after arriving at the front, on 12 March 1917, but soon rejoined the battalion, and took part in the Battle of Cambrai during November 1917. Alfred was evacuated home to the General Hospital at Denmark Hill, London after being gassed at Cambrai. He sadly died of the effects of gas poisoning on 20 April 1918 and is buried at Rhydybont Congregational Chapelyard, near Llanybydder. 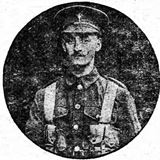 Herbert Lewis, Private, 81841, Royal Army Medical Corps. Herbert was the Son of David and Anne Lewis, of Stafellwen, Llanycrwys. Herbert was studying at Carmarthen College for the Baptist Ministry prior to the war, and volunteered to serve with the Welsh Company, Royal Army Medical Corps, which was attached to the 53rd (Welsh) Division. The Division had fought at Gallipoli in 1915, then Egypt in 1916 and in Palestine in from 1917 until the armistice. Herbert was transferred to the 201st Company, Labour Corps after the cessation of hostilities, but took ill and died on 22 January 1919, aged 34. He is buried at Sarigol Military Cemetery, Kriston, Greece. 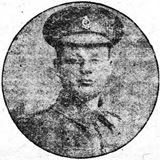 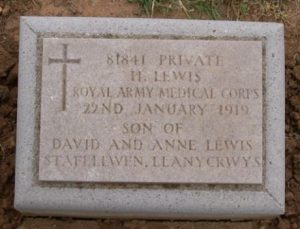 David Walters, Second Lieutenant, Lancashire Fusiliers. David was the son of Thomas and Jane Walters, of Llwynglas, Llanycrwys. He enlisted during August 1914, and served with the 63rd Field Company Royal Engineers in France until August 1916, when he received his commission as a Second Lieutenant into the 15th Battalion, Lancashire Fusiliers. The battalion was attached to 96 Brigade, 32nd Division. The Division had been on the Somme when the Battle of the Somme opened, then moved to the Cambrin sector to rebuild, before moving back to the Somme, to re-join the offensive. The Division then wintered on the Somme, and in March 1917 it followed the German Retreat to the Hindenburg Line. David was wounded at Savy Woods, near St. Quentin, and died at Hospital in Rouen on 22 May 1917 aged 28. He is buried at St. Sever Cemetery, Rouen, France. 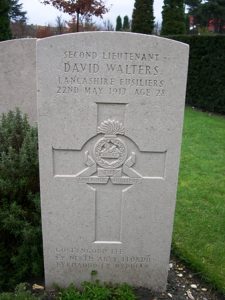 John Williams, Able Seaman, Z/2398, Royal Naval Volunteer Reserve. John was born at Swansea on 29 November 1883. He was the Nephew of Mrs. Rachael Davies, Tynreithyn, Llanycrwys. John had married prior to the war, and his wife, Sarah Ann Williams, resided at 12 Richard Street, Mardy, Glamorgan. John resided at 10 Wassail Square, Swansea prior to enlisting on 9 November 1915, under the alias of David Evans, into the Royal Naval Volunteer Reserve. His papers show that he was sentenced to six months Imprisonment with Hard Labour in HM Prison Dorchester on 31 May 1916 for unlawful wounding. He was released, and moved to France on 16 December 1916, and joined Nelson Battalion, 63rd (Royal Naval) Division. John joined the RND on the Somme, in the Ancre Valley. He was killed in action on 20 January 1917, and is buried at Hamel Military Cemetery, Beaumont Hamel, France. John does not appear to be commemorated locally. 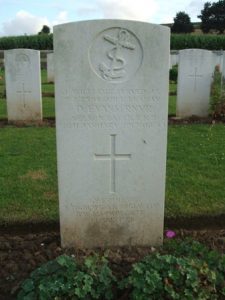