Llanybri is a small village which is situated roughly two miles north of Llansteffan, on the road to Bancyfelin. There are two memorials within Capel Newydd to its members who fell during both World Wars. The photographs of the memorials were kindly sent in by Eiluned Rees, of the Llansteffan Family Historical Society. There are two new memorial plaques at Llanybri, which have recently been affixed to the Y Hen Capel, a ruined chapel which lies in the centre of the village. These are on a separate page. 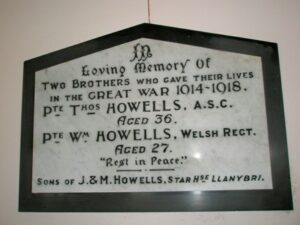 Thomas Howells, Private, M2/046283, Royal Army Service Corps. Thomas was born at Llanybri, the son of John and Mary Howells. The family then moved to Llain, at Llanybri, where Thomas grew up, and his brother William was born. Thomas enlisted at Merthyr into the Army Service Corps, Base Mechanical Transport Depot. John was sent to France in 1915, but took ill and Died of Sickness on 19 January, 1916, aged 36. He is buried in Ste. Marie Cemetery, Le Havre, France. Many thanks to Andrew Devine, the Great Nephew of Thomas, for the photograph of him in uniform. 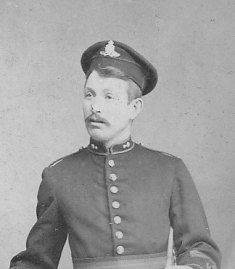 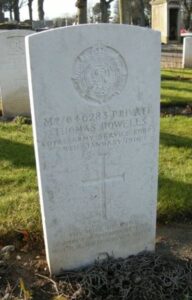 William Howells, Private, 54571, Welsh Regiment. William was the younger brother of Thomas, the son of John and Mary Howells. William had been born at Star House, Llanybri, and enlisted at Carmarthen into the Pembroke Yeomanry. Later William transferred into the 9th Battalion, the Welsh Regiment, which formed part of 58 Brigade, 19th (Western) Division. It is not known when William transferred, but the 19th Division had fought in all of the major battles of the War, at Loos, the Somme and at Passchendaele, and were to meet their sternest tests in 1918. They were in the St. Quentin area when the German Spring Offensive was launched, before moving North to Messines, where they suffered terrible losses. William was wounded at Messines, and was evacuated to the Casualty Clearing Station at Haringhe, West of Ypres, where William Died of Wounds on 15 April 1918, aged 27. He is buried there, in Haringhe (Bandaghem) Military Cemetery, Belgium. 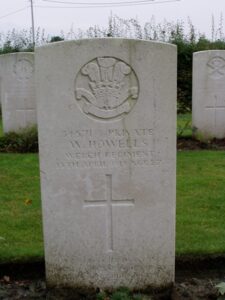 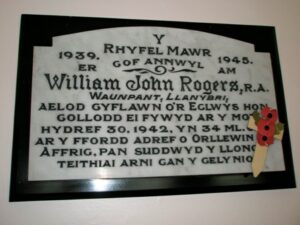 William John Rogers, Gunner, 1747903, Royal Artillery. William was born at Llanybri, the son of John and Margaret Rogers, and the husband of Sarah Mary Rogers, of Llanybri. He joined the Royal Artillery at the outbreak of War, serving in their 313th Battery, 4th Heavy Anti Aircraft Regiment. William was possibly serving as an Anti Aircraft Gunner aboard a ship, as he was killed on 30 October 1942, aged 35, and is remembered on the Brookwood Memorial, Surrey. He was probably serving aboard the Boom defence vessel Panorama. The Brookwood Memorial serves to commemorate members of the UK land forces who died in WW2 and who have no known graves. The majority of the names on the memorial are of people lost at sea, while others are those whose places of burial have not been identified. 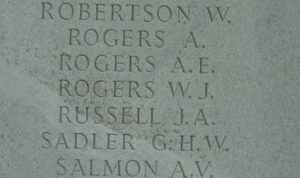