The Village of Llanwrda is situated in the beautiful Towy Valley, about three miles south of Llandovery. The War Memorial is an impressive statue of a soldier of the great war stood atop a marble plinth, on which is inscribed the names of the fallen of both world wars. Many thanks to Dave Hanson for the photograph of the memorial. 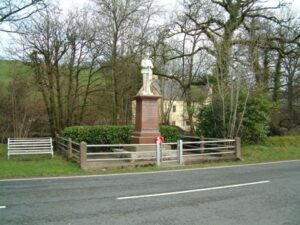 Sydney John Arthurs, Private, 15509, Royal Welsh Fusiliers. Sidney was the son of Cornelia J. Arthurs, of 280 Huntingfield Rd., Putney, London, and the brother of Ethel Duffield of 61 Spring Grove Crescent, Lampton, Hounslow, Middlesex. Prior to the war, he resided at Paris House, Llanwrda, and he enlisted at Carmarthen into the 10th Battalion, Royal Welsh Fusiliers, attached to 76 Brigade, 3rd Division. The Division were at Ypres when Sidney joined them, and he took part in the actions at the Bluff and of the St. Eloi craters. In June 1916 the Division moved to the Somme, and they took part in the Battle of Albert, the Battle of Bazentin, and the Battle of Delville Wood, where they captured Longueval Village. Sidney was killed in action on 20 July 1916, aged just 22, and is buried at London Cemetery & Extension, Longueval. 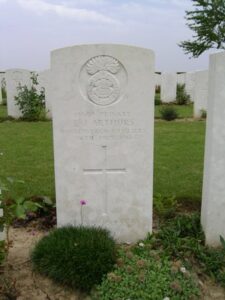 Robert Philip Behrens, Lieutenant, South Wales Borderers. Robert was born at Chorlton, Lancashire on 4 December 1893, the son of George Benjamin Behrens and Helen Elizabeth Behrens. Helen was the daughter of John Morgan Davies of Froodvale, Llanwrda, and the sister of Oswyn St. Leger Davies, of Vron Yw, Denbighshire. Robert was educated at Cordwalles, Maidenhead, and had gained a commission in the 2nd Battalion, South Wales Borderers. The 2nd SWB were stationed in China at the outbreak of war, and fought at Tsingtau against the German forces stationed there. On 4 December 1914 they embarked at Hong Kong, and returned to England, landing at Plymouth on 12 January 1915. Here they were attached to 87 Brigade, 29th Division, and on 16 March 1915 sailed from Avonmouth to Egypt. On 10 April the Division moved to Mudros, where the invasion force was building up ready for the invasion of the Gallipoli Peninsula, and on the morning of 25 April 1915 the Division landed at Cape Helles. Sadly Robert was shot during the landing at De Tott’s Battery. He died at sea and was buried from HMS Cornwallis that same day. Robert was 21 years old, and is remembered on the Helles Memorial. He is not commemorated locally. 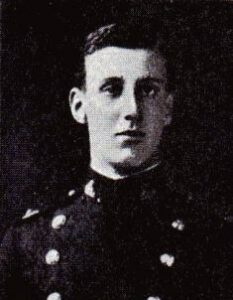 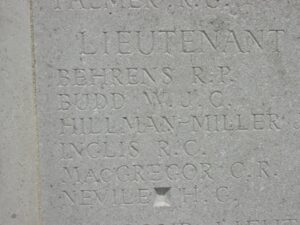 James Thomas Davies, MM, Private, 4020, Welsh Guards. James was the son of David and Anne Davies, of Dan Y Graig, Llanwrda. He was a policeman prior to enlisting at Pentre into the Welsh Guards. The Welsh Guards had been formed on 6 February 1915 by Royal Warrant, and on 17 August 1915 embarked at Southampton for France, and they arrived at Le Havre that day. On 27 September the Battalion left Le Havre for Loos, as part of 3rd Guards Brigade, Guards Division. They fought during the Battle of Loos, before moving to Ypres in June 1916, which is where David joined the Battalion. In September they moved to the Somme, where they remained until the end of November. After a spell in reserve, they moved north to Ypres again, and they fought at Third Ypres before moving to take part in the Cambrai Offensive. When the German Spring Offensive was launched on 21 March 1918, the Guards Division were in the St. Quentin sector, and fought in the First Battle of Bapaume, where the German pushed their way back across the old Somme Battlefields towards the coast. They were halted at Albert, where the Guards Division took part in the desperate defence there. After the Germans were stopped in their tracks on 8 August at the Battle of Villers-Brettoneux, the Guards Division took part in the great advance, fighting at the Battle of Bapaume, Havrincourt, the Canal du Nord, Cambrai, the Selle and the Battle of the Sambre, where James was wounded. He died of wounds on 7 November 1918, aged 35, and is buried at Villers-Pol Communal Cemetery Extension. 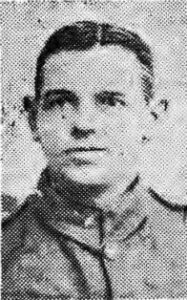 Morgan Rees Davies, Private, 58397, Royal Welsh Fusiliers. Morgan was the son of David and Catherine Davies, of Tirallen, Llanwrda. He enlisted at Chepstow into the 14th Battalion, Royal Welsh Fusiliers, which were attached to 113 Brigade, 38th (Welsh) Division, and embarked with the Division for France in December 1915. The Division served in the Armentieres sector, where they were initiated into trench warfare, before moving South to take part in the Battle of the Somme. The task allotted to the Division was the capture of Mametz Wood, and after a stuttering start to the offensive, finally succeeded in capturing the wood at heavy cost. They were put into reserve for almost a year before taking part in the Battle of Third Ypres, capturing Pilckem Ridge, and saw considerable action during Spring 1918, when the German Offensive was launched. They remained in the area until the tide of war was turned on 8 August 1918, and then began the push back toward the mighty Hindenburg Line. Morgan was killed in action on 24 August 1918, aged 19, and is buried at Ovillers Military Cemetery, France. 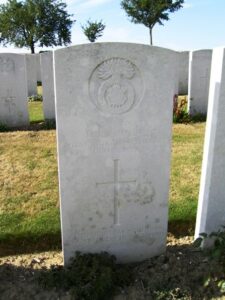 John Evans, Private, 200343, Welsh Regiment. John was the son of John and Mary Evans, of Tyllwydhir, Llanwrda. He enlisted at Llandeilo into the 1/4th Battalion, the Welsh Regiment, which was attached to 159 Brigade, 53rd (Welsh) Division. The Division landed on Gallipoli on 9 August 1915, and fought through a terrible winter on the Peninsula before being evacuated to Egypt after suffering severe losses. They then fought in the Palestinian Campaign, where John was killed in action at the Second Battle of Gaza on 21 April 1917, aged 28. He is buried at Gaza War Cemetery, Israel. 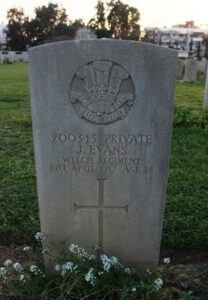 Morris Evans, Private, 8136, Welsh Regiment. Morris was the son of Titus and Mary Evans, of Cwmdwr, Llanwrda. He married Agnes Smyth in 1908, and the couple had five children, all born at Llandovery, before moving to 13, Mary Street, Seven Sisters. Morris was probably a pre-war regular, and re-enlisted at Ferndale into the 2nd Battalion, Welsh Regiment. The battalion was sent to France as part of 3 Brigade, 1st Division which were one of the first Divisions in France, landing at Havre on 13 August 1914. After the retreat from Mons to the Aisne, they were moved to Ypres, where Morris was Killed in Action during the First Battle of Ypres, at Gheluveld on 23 October 1914, aged 29. He is buried at Perth Cemetery (China Wall), Belgium. His twin brother, Evan, served with the 13th Welsh. 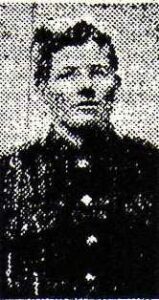 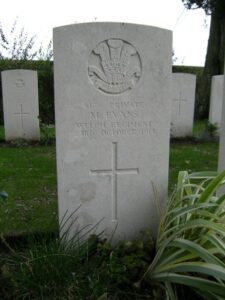 David Jones, Private, 41927, Welsh Regiment. David was the son of Joseph and Charlotte Jones of Brynteg, Llanwrda. He enlisted at Llandovery into the Welsh Regiment, and was posted to the 23rd Battalion. The Battalion had embarked for Salonika on 13 July 1916 as part of the 69th Division, but once they arrived there they were attached to the 28th Division as Pioneers. David was killed in action at Salonika on 4 October 1916 aged just 20, and is buried at Struma Military Cemetery, Greece. 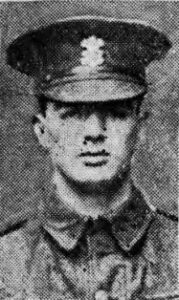 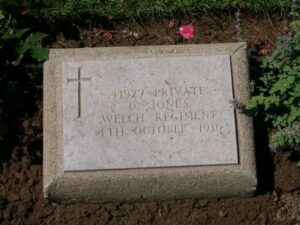 Clifford Andrew Loveluck, Second Lieutenant, Royal Welsh Fusiliers. Clifford was the Eldest son of Griffith David and Mary Catherine Loveluck, of Central Pharmacy, Aberavon, Glamorgan, and the Grandson of Mr. John Davies, Llanwrda House, Llanwrda. Clifford was educated at Llandovery from 1908 until 1910, and on leaving Llandovery became a Dental student at Guy’s Hospital, London. Clifford was commissioned from the Royal Army Medical Corps into the 5th Battalion, Royal Welsh Fusiliers on 27 February 1918, and in July 1918 was attached to the 26th Battalion, Royal Welsh Fusiliers, which was on the Western Front, as part of 176 Brigade, 59th Division. The Division took over a sector near Arras on 25 July 1918 and came under the command of Third Army. On 21 August 1918 an offensive was launched by the British on the Somme, and the Division took part in an attack near Ablainzeville. Two days later, it held the British front line as the British attacked across the valley of the River Scarpe near Arras. As the Armies advanced, the 59th was used to follow up the attacking units. It then took part in the Advance in Flanders, where it operated in the area of the River Lys. On 16 October 1918 the Division advanced to the Bassée Deule canal, and by 23 October had advanced to near Valenciennes on the Belgian border. When the fighting ended on 11 November 1918, the forward units halted north-east of Tournai, in Belgium. Clifford had been taken ill during this last period of the war, and had been sent to the Base Hospital near Boulogne to recover. However, he sadly died there on 20 November 1918, aged 24, and is buried at Terlincthun British Cemetery, Wimille, France. Clifford is not commemorated at Llanwrda. 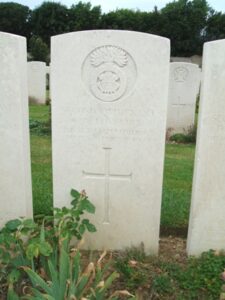 Robert Alagon Rolfe, Private, GS/59005, Royal Fusiliers. Robert was born in Plymouth in 1889, the son of George Alagon Rolfe and Elizabeth Sarah Rolfe, but she had moved together with him and his elder brother George to London by 1891. By 1901 Robert was lodging with Ellen Hathaway at Reynoldston, near Swansea. His mother was by now a patient in Glamorgan County Asylum, where she died in 1914. Robert had enlisted into the army on 22 November 1915 and was initially posted to the 13th Battalion, Royal Fusiliers. On 24 September 1917 he was posted to the 7th Battalion, Royal Fusiliers, which was in France attached to 190 Brigade, 63rd (Royal Naval) Division. Robert would have taken part in the assault of the division on Passchendaele Ridge soon afterwards, during the later stages of the Third Battle of Ypres, before the 63rd Division was transferred south to take part in the Battle of Cambrai. Robert was invalided home at the end of December 1917 and returned to Britain for hospital treatment. He was eventually discharged from the army due to ill health on 11 August 1919. Robert returned to live at Monksland Farm, Porteynon, but married Margaret Evans, of Smithfield House, Llanwrda late in 1919. He died of tuberculosis on 13 April 1921, aged 30. Robert was buried in Llanwrda on 7 May 1920. He is not commemorated by the CWGC.

William Thomas, Private, 2181, Pembroke Yeomanry. William was the son of Thomas and Ceturah Thomas, of Drovers, Porthyrhyd, Llanwrda. He enlisted at Llandovery into the 1st/1st Battalion, Pembrokeshire Yeomanry, which sailed for Egypt in March 1916, as part of the 1st Mounted Division, and joined the Western Frontier Force, tasked with guarding the Suez Canal defences. The Pembroke Yeomanry took part in several actions against the pro-Turkish Senussi tribesmen over the coming months, and it was in one such action that William was wounded. He died of his wounds on 11 January 1917, aged 25, and is buried at Kantara War Memorial Cemetery, Egypt. William is not commemorated on the Llanwrda memorial, but is possibly commemorated at Porthyrhyd. 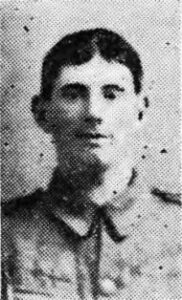 William Arthur Davies, Gunner, 1094375, Royal Artillery. William was the son of Oakey and Margaret Davies, of Minyrafon, Llanwrda. He enlisted into the Royal Artillery and was posted to the 72nd Anti Tank Regiment. William fought with the regiment dur9ing the North African campaign and took part in the subsequent invasion of Italy. He was killed on 27 August 1944, aged 27, and is buried in Arezzo War Cemetery, Italy.

Douglas Victor Williams, Able Seaman, D/JX 227806, Royal Navy. Douglas was born on 8 December 1918, the son of William and Alice Williams, of Hafod Farm. He enlisted into the Royal Navy and was posted aboard the battlecruiser HMS Repulse. The ship spent the first months of the war hunting for German raiders and took part in the Norwegian Campaign of 1940 before joining the search for the Bismarck in 1941. Repulse escorted a troop convoy around the Cape of Good Hope from August to October 1941 and was then transferred to East Indies Command. She was assigned in November to Force Z which was supposed to deter Japanese aggression against British possessions in the Far East. Repulse and her consort Prince of Wales were eventually sunk by Japanese aircraft on 10 December 1941 when they attempted to intercept landings in Malaya. Douglas was 23 years old when he died in the sinking of Repulse and he is commemorated on the Plymouth Naval Memorial, Devon.