Llanwinio is a community in Carmarthenshire, which is almost three miles north of the hamlet of Gellywen. Llanwinio is home to St. Gwynno’s Church, which lies on the bank of the River Gynin and also to Ainon Baptist Church, which was built in 1828. The community is bordered by the communities of: Trelech; Meidrim; Llangynin; and Llanboidy, in Carmarthenshire; and by Crymych and Clydau in Pembrokeshire. The three men of the community who fell during the Great War are commemorated on the Llanwinio War Memorial, which stands in the grounds of St. Gwynno’s Church. Another local man who died is not commemorated on the memorial, but is buried in Ainon Baptist Church, whilst one other local man is also missing from the memorial. These five men are all commemorated below. The photograph of the memorial is courtesy of Kevin Bowen. 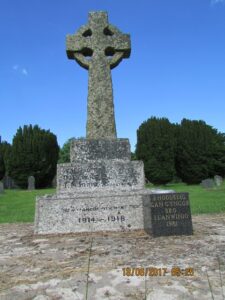 Willie Davies, Fourth Engineer Officer, Mercantile Marine. Willie was the son of Henry and Sarah Davies, of Penybont, Cwmfelin Mynach. He served aboard the steamship SS Guildhall, which had been built by Tyne Iron Shipbuilding Company in Newcastle in 1898, and was owned by the Letricheux Line, Swansea. On 25 June 1917, Guildhall was on a voyage from Valencia to Cardiff with a cargo of ore and oranges, when she was sunk without warning by the German submarine U-62, with the loss of 12 of her crew. Willie was one of the men lost that day. He was 21 years old, and is remembered on the Tower Hill Memorial, London. Willie is commemorated on the Llanboidy and Whitland Grammar School memorials, but not at Llanwinio.

William Henry Davies, Rifleman, 34036, South Lancashire Regiment. William was the son of Henry and Jane Davies, of Tynewydd, Cwmbach. He was educated at the Parish School before moving to Treherbert to become an apprentice draper and then became an assistant to D. Evans and Co. Swansea. He then took up a position at Morgans, The Hayes, Cardiff. He enlisted at Cardiff into the army in March 1916 and was initially posted to the 7th Battalion, South Lancashire Regiment. He was then posted to France in September 1916, joining the 1/5th Battalion, South Lancashire Regiment, which was attached to 166 Brigade, 55th (West Lancashire) Division. The Division had formed in France during January 1916 and had fought on the Somme later that year before moving to Flanders. In August 1917 the Division took part in the Battles of Third Ypres, fighting at Pilckem and the Battle of the Menin Road, before being moved to the Cambrai area, where they took part in the November Battle of Cambrai, where the 1/5th South Lancs were virtually annihilated. In February 1918 the Division moved to Festubert and was hit here by the German Lys Offensive, which was launched on 9 April. During the ensuing days the division suffered terrible casualties during a desperate rearguard action. William survived the worst of the fighting but was killed by a shell on the 21 April 1918, aged 36. He was originally buried in the Rest of the Weary Cemetery, at Festubert. His grave was lost in the further fighting in the area, and so he is commemorated on the Loos Memorial, France. 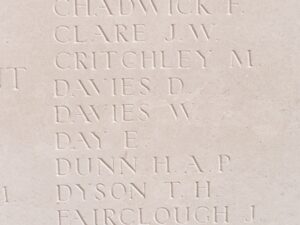 David John Evans, Private, 2459, Welsh Guards. David was born on 27 February 1896, the son of Job and Sophia Evans, of Fronfelin, Cwmbach. Educated at Cwmbach Council School and at Whitland, David had gained employment at Porth with a firm of General Merchants. He enlisted at Porth on 18 December 1915 into the 1st Battalion of the newly formed Welsh Guards. The Welsh Guards had been formed in February 1915, and on 17 August 1915 embarked at Southampton for France, and they arrived at Le Havre that day. On 27 September the Battalion left Le Havre for Loos, as part of 3rd Guards Brigade, Guards Division. They fought during the Battle of Loos, before moving to Ypres in June 1916. David joined the Battalion at Ypres in June 1916. In September they moved to the Somme, where they remained until the end of November. After a spell in reserve, they moved north to Ypres again, and they fought at Third Ypres before moving to take part in the Cambrai Offensive. David was killed in action by machine-gun fire during a charge at Cambrai on 1 December 1917 and was buried by his comrades at Gouzeaucourt, where a cross was erected to mark his grave. Sadly, the grave was lost during the continued fighting in the area, and so David is commemorated on the Cambrai Memorial, Louverval, France. 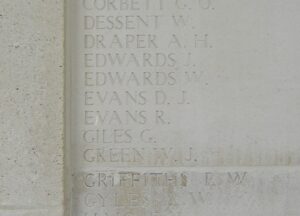 John David Jones, Private, 63459, South Wales Borderers. John was the son of Thomas Jones, of Blaendyflin, Cwmfelin Mynach. He served with the 3rd Battalion, South Wales Borderers, which was a Home Service Battalion and was initially stationed at Pembroke Dock at the outbreak of war, being used to train troops to send to the regular battalions of the regiment. The battalion moved to Edinburgh in November 1914 and in June 1915 moved to Liverpool, where it remained as part of the Mersey Garrison for the duration of the war. Jones probably joined the battalion in 1918 as he has a late service number. He died of pneumonia at Seaforth Military Hospital, Liverpool on 13 October 1918, aged 22 and is buried in Gelliwen (Ainon) Baptist Chapelyard. John is not commemorated on the Llanwinio memorial. 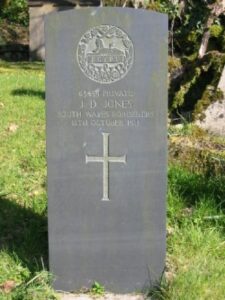 Thomas Morris, Private, 30442, East Lancashire Regiment. Thomas was the son of Mathias and Esther Morris, of Bryndwyran, Gellywen. He worked as a farm labourer prior to enlisting at Woolwich into the Royal Army Veterinary Corps. Thomas was then transferred to the 8th Battalion, East Lancashire Regiment, which was attached to 112 Brigade, 37th Division. In July 1915 the Division landed at Boulogne and concentrated near St Omer by 2 August 1915. It took part in the Attack on the Gommecourt Salient, during the first phase of the Battle of the Somme, seeing heavy casualties. Two of the division’s infantry brigades and the Divisional pioneers were then attached to the 34th Division from 6 July until 22 August 1916, taking part in several actions before returning to the division and fought on the Ancre before moving to Arras the following year. The division then took part in the First Battle of the Scarpe, where they captured Monchy le Preux. They then took part in the Second Battle of the Scarpe, and the Battle of Arleux before moving north to Ypres. Here, the division fought throughout the Third Battle of Ypres, and remained in the salient over the winter. Thomas was badly wounded by shellfire while his battalion was supplying working parties near Dickebusch and died that same day, on 26 January 1918, aged 25. He is buried at Nine Elms British Cemetery, Poperinghe, Belgium. The battalion was disbanded during the army reforms the following month. 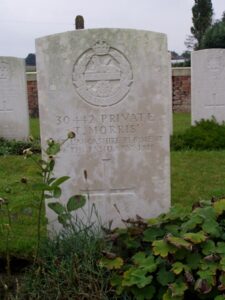