Llansaint is a former fishing village, situated on the mouth of the River Towy, and forms part of the Parish of St Ishmael’s. The village has ancient origins, being situated near to an Iron Age Fort. The men of Llansaint who fell during both World Wars are commemorated on three separate memorials which are located inside All Saints Church, Llansaint. The Great War Memorial plaque is made of marble, and commemorates three local men who fell. The four men who fell during World War Two are commemorated on a brass plaque and a stained glass window, which were once located in Seion Methodist Chapel in Llansaint, which were relocated after the Chapel was sold. The Bishop of St. Davids blessed the window after its erection within the Church. Many thanks to Ryland Marks for sending in the photos of the memorials. 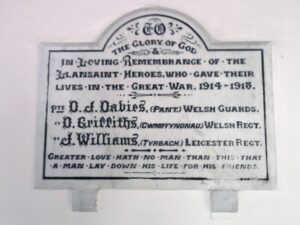 David John Davies, Private, 3091, Welsh Guards. David was the son of John and Margaret Davies, of Pant, St. Ishmael’s. He enlisted at Carmarthen into the Welsh Guards, which had been formed by Royal Warrant on 26 February 1915. The 1st Battalion, Welsh Guards moved to France, landing at Havre on 18 August 1915, where it was attached to the 3rd Guards Brigade, Guards Division and saw its first action during the Battle of Loos. The Guards wintered on the Ypres Salient, and remained there until 27 July 1916 when the division moved South to the Somme, to take part in the ongoing Somme offensive. The Guards Division saw heavy fighting on the Somme, during the Battles of Ginchy, Flers-Courcelette and Morval before spending the Winter of 1916/17 in the Somme trenches. The division moved out of the line at the end of March 1917 to rest and refit before taking over a section of the line north of Ypres, to the left of the 38th (Welsh) Division at Pilckem Ridge. David was reportedly shot dead by a sniper while carrying a despatch during the divisions assault on the Pilckem Ridge on 31 July 1917, aged 22. His grave was lost in the Flanders mud so he is commemorated on the Menin Gate Memorial, Ypres, Belgium. There is also a memorial plaque to David in St. Ishmael’s Church, Ferryside. 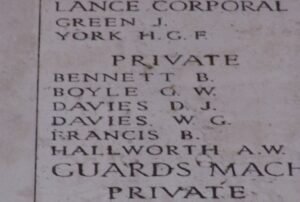 David Griffiths, Private, 54198, Welsh Regiment. David was the son of John and Mary Griffiths, of Cwmffynonau, Kidwelly. He enlisted at Carmarthen into the army, and was posted to France, where he joined the 16th Battalion, Welsh Regiment, who had been in France since December 1915 attached to 115 Brigade, 38th (Welsh) Division. David probably joined the battalion after it had fought at Mametz Wood. They were withdrawn to Hebuterne, and then moved to Ypres in August 1916. David was in the line with his battalion at Ypres, when he was wounded. He was taken to the Casualty Clearing Station at Proven where he died of wounds on 9 February 1917, aged 20, and is buried there, at Mendinghem Military Cemetery, Belgium. 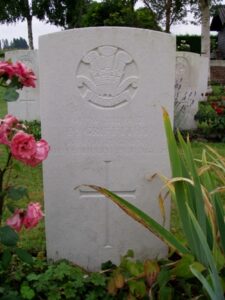 John Williams, Private, 43216, Leicestershire Regiment. John was the son of john Williams, of Glantaff, Ferryside, and enlisted into the 10th Battalion, Welsh Regiment. He subsequently transferred into the 1st Battalion, Leicestershire Regiment. The Battalion had been in France since September 1914 as part of 16 Brigade, 6th Division, and had fought at the Aisne and Hooge, before transferring to 71 Brigade, in the same 6th Division. The battalion then fought at the Somme in 1916, then at Hill 70 and the Battle of Cambrai in 1917. The 6th Division was caught in the German Spring Offensive of 21 March 1918, and moved to Flanders. After a very tense few months for the Allies, the tide finally turned on 8 August 1918 after a spectacular Australian Victory at Villers-Brettoneux. The Allies were on the offensive from then on, and the 6th Division pushed on through Flanders, recapturing the lost ground of the previous months. They then moved south again where they fought at the Battle of Épehy, which was the jumping off point for the assault on the Hindenburg Line, and were in that vicinity, fighting in the 1918 Battle of Cambrai when John was Killed in Action on 18 September 1918. He is buried in Chapelle British Cemetery, Holnon, France. 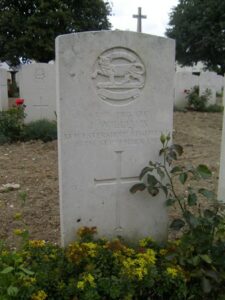 Delwyn Davies, Marine, PLY/X. 108897, Royal Marines. Delwyn was the son of Bertie and Olive Davies, of Llansaint. He served with the Royal Marines. On the night of 25 April 1943, Delwyn was aboard H.M. Landing Craft Gun (L.C.G.) 15, which, together with H.M.L.C.G. 16, were being delivered from the Harland and Wolff shipyard in Belfast, to Falmouth. The two craft contained a total of seventy nine sailors and Royal Marines, but a gale blew up, and the craft began to get into trouble. They reached the entrance to Fishguard Harbour, but were refused permission to enter, and so headed southwards towards Milford Haven and safety. However, as they rounded St. Ann’s Head, the conditions worsened, and the vessels began taking on water faster that the pumps could handle, and so they radioed for help. The coastguard called the Angle lifeboat, only to be told that it was out of commission. Six hours went by before the St David’s lifeboat was eventually called out. It took them two and a half hours to reach the crafts, by which time it was dark and nothing could be done. The two craft separated and the L.C.G.15 sank on 25 April 1943. The old fishery protection vessel HMS Rosemary was also on her way, and upon reaching the remaining Landing Craft, L.C.G.16, launched her lifeboat. The six sailors aboard drowned trying to reach the Landing Craft, as the lifeboat overturned in rough seas. The L.C.G.16 soon sank herself with the loss of all hands. Some of the bodies were washed ashore in Freshwater Bay in the coming days, and were buried in various cemeteries, many at Milford. Several bodies were never found, and the sites have been classed as war graves. Delwyn was just 18 years old when he died on the night of 25 April 1943. His body was recovered, and he is buried at Llansaint (Seion) Calvinistic Methodist Cemetery. He is also commemorated alongside his friends on the H.M.L.C.G. 15 and 16 memorial overlooking Freshwater Bay (see the Pembrokeshire section of the website).

John Dudley Jones, Lance Corporal, 4209253, Royal Welch Fusiliers. John was the son of Hannah Jane Jones, of Minyrafon, Llansaint. He served with the 7th Battalion, Royal Welch Fusiliers, which was attached to 158th Infantry Brigade, 53rd (Welsh) Division. The Division was a Territorial unit, and had been on home service for most of the war, before landing on the Normandy beaches at the end of June 1944. After taking part in the break out from the Normandy beach-head, the division took part in the closing of the Falaise Pocket before moving northwards through Belgium and Holland towards Germany. The division, as part of XXX Corps, then took part in Operation Market Garden, and in the Battle of the Bulge later that year. John was killed in Germany on 15 April 1945, aged 23. He is buried in Becklingen War Cemetery, Germany.

Thomas Hector Rogers, Private, 14716877, Welch Regiment. Thomas was the son of John and Sarah Ann Rogers, of Llansaint. He served with the 1/5th Battalion, Welch Regiment, which was attached to 158th Infantry Brigade, 53rd (Welsh) Division. The Division was a Territorial unit, and had been on home service for most of the war. On 27 June 1944 the advance party of the 53rd (Welsh) Division landed at Jug Beach, Normandy, and after taking part in the break out from the Normandy beach-head, the division took part in the closing of the Falaise Pocket (where Tasker Watkins of the 1/5th Welch won the Victoria Cross), before moving northwards through Belgium and Holland towards Germany. The division, as part of XXX Corps, then took part in Operation Market Garden. Thomas was killed in action during heavy fighting in Netersel, towards the closing days of Operation Market Garden, on 24 September 1944. He was just 18 years old, and is buried in Bergen-Op-Zoom War Cemetery, Netherlands.

Samuel Vernon Wickland, Flight Sergeant, 640170, Royal Air Force. Samuel was born at Llansaint in 1921, the son of Joseph James Wickland and Elizabeth Jane Wickland (nee Samuel). Samuel married Ivy Gamble, of Greenwich, London in 1942. He served as an Air Gunner with 61 Squadron, Royal Air Force, which was a heavy bomber squadron, equipped with the Avro Lancaster. On the evening of 23 September 1944, Samuel took off from RAF Skellingthorpe aboard Lancaster ND988, which was attached to a force ordered to bomb the Dortmund-Ems Canal at Ladbergen near Munster. The Lancaster was shot down and crashed at 23:30 at Wechte, about two miles from Tecklenburg. Samuel was one of six of her crew killed in the crash; there was only one survivor. Samuel was 23 years old, and is buried alongside his fellow crewmen in Reichswald Forest War Cemetery, Germany.