Llanllwch is a small village located about two miles west of Carmarthen. The religious needs of the village are served by the ancient St. Mary’s Church, which was the place of worship of the Edwardes family of Rhyd-y-Gors Manor, and was one tied to St. Peter’s Church in Carmarthen. Several of the men below are in fact commemorated at St. Peter’s Church. I have not had the opportunity of finding St. Mary’s Church open during the times when I have visited, so do not know if there are any war memorials inside. As a result, this page commemorates the men known to have lived in the village who fell during World War One. Any omissions are unintentional, and any photographs of any war memorial in the village would be much appreciated, so that the page can be accurately written.

David Cleaver, Gunner, 206097, Machine Gun Corps. David was the son of Francis and Rachel Cleaver, of Llanllwch Mill, Johnstown. He worked at Towy Works prior to joining the Machine Gun Corps in 1916, and was posted to the Heavy Branch, which was the fore-runner to the Tank Corps. David became ill during his training, and was admitted to Hospital at Bovingdon. He died there of pneumonia on 5 March 1917, aged 19, and his body was brought back home, where he was buried with full military honours at Llanllwch Churchyard. 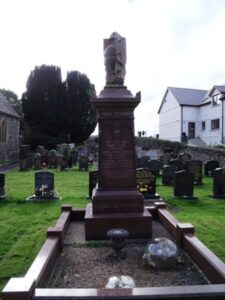 Thomas Ernald Davies, Corporal, 203565, Welsh Regiment. Thomas was born at Carmarthen on 31 May 1897. He was adopted by Thomas Vicary Rees and Annie Mary Davies, of Llanllwch. Thomas resided at Penygroes prior to the war, returning to Carmarthen to join the 9th Battalion, Welsh Regiment. The Battalion formed part of 58 Brigade, 19th (Western) Division, and had fought during the opening attack of the Battle of Loos, and then moved to the Somme, where they took part in the second wave of the attack on Ovillers-La Boiselle on 1 July 1916, capturing the village at heavy cost, and fought through the Somme Battles of Pozieres and the Ancre in 1916. They then moved North, taking part in the Third Battle of Ypres. In 1918 they were caught up in the German Spring Offensive near St. Quentin, where they suffered terrible casualties, and fought at the Battle of Bapaume. They moved to Ypres, but were caught up in the German attack at Messines, and fought a stubborn rearguard action over the coming days. After suffering terribly again, they moved South to the quieter French sector to rebuild, but were caught up in the German offensive on the Aisne, where Thomas was killed by a shellburst on 2 June 1918, aged 21. He has no known grave, and so is commemorated on the Soissons Memorial, France. 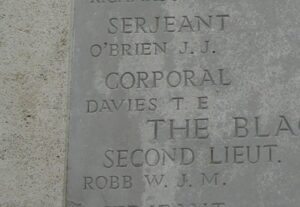 Samuel Evans, Private, 49542, Welsh Regiment. Samuel was the son of Evan and Elizabeth Evans, of 1, Mill Row, Llanllwch, near Carmarthen. Samuel enlisted at Llanelli into the Welsh Regiment, and was posted to the 9th Battalion, Welsh Regiment, which was in France attached to 58 Brigade, 19th (Western) Division. He probably joined the division after it had taken part in the Somme offensive. In 1917 the Division moved north to Ypres, taking part in the Battle of Messines, and fought during the Battles of the Menin Road, Polygon Wood, Broodseinde, Poelcappelle and Passchendaele Village itself. In 1918 they were caught up in the German Spring Offensive near St. Quentin, where they suffered terrible casualties, and fought at the Battle of Bapaume. They moved to Ypres, but were caught up in the German attack at Messines, and fought a stubborn rearguard action. After suffering terribly again, they moved South to the quieter French sector to rebuild, but were caught up in the German offensive on the Aisne, and again suffered terrible casualties. In May 1918 Samuel returned home on leave, and married Catherine Ann Evans, of 2, Llandafen Row, Half Way, Llanelli. He returned to France to rejoin the 9th Welsh after the 19th Division had moved back north to take part in the great offensive of August 1918. It was during the Advance on the Hindenburg Line that Samuel was wounded, and he died on 20 September 1918, aged 28. Samuel is buried at Lapugnoy Military Cemetery, France. 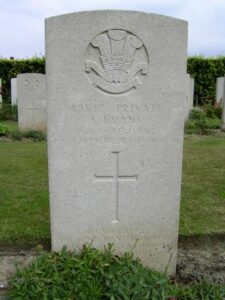 Kirk Hearder, Sergeant, 790, Monmouthshire Regiment. Kirk was born at Llanllwch on 9 June 1883, the son of Dr. George Jonathan Hearder and Mrs. Marie Hearder, of 4, Picton Place, Carmarthen. He married Mary Louisa Weights, a Postmistress, at Newport in 1912, and the couple then lived at 83, Clevedon Road, Weston-super-Mare. Kirk was a Clerk at the National Provincial Bank at Newport, and enlisted there into the 1st Battalion, Monmouth Regiment, which were at Stow Hill, Newport as part of the Welsh Border Brigade, Welsh Division. During February 1915 the Battalion left the Welsh Division and landed in France on 13 February, attached to 84 Brigade, 28th Division. The Division saw its first major action at First Ypres in 1914. It was during the Second Battle of Ypres, that Kirk was killed in action, during the Battle of Frezenberg, on 8 May 1915. He was 31 years old, and is commemorated on the Ypres (Menin Gate) Memorial, Belgium. His brother, Major Dixon Hearder, served with the 11th Battalion, Australian Imperial Force. 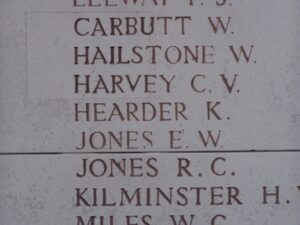 Wallis Austin Jonathan Marsden, Lieutenant, Royal Field Artillery. Wallis was the eldest son of the Reverend Jonathan Marsden and Emmeline Marsden, of Llanllwch. He was educated at St. David’s College, Lampeter and at St. John’s, Oxford prior taking up a post as Classicals Master in a London school. Wallis was commissioned into the Territorial’s prior to the war, and was posted to France with the 2nd London Brigade, Royal Field Artillery. Wallis was wounded during the Battle of the Somme, on 21 September 1916 and was brought back to England for treatment at the Empire Hospital, Westminster. He died of his wounds on 20 July 1917 and was brought home for burial at Llanllwch Churchyard.

Frederick Aylward McDermott, Private, 857, Australian Infantry. Frederick was born at Rhyd-y-Gors Mansion, Carmarthen on 29 June 1876, the son of Paymaster Chief Cornelius William McDermott and Mary Ann McDermott. He was educated at Richomnd Grammar School, Yorkshire, and at Mannamead College Plymouth prior to emigrating to Australia in 1910, after having served for six years in the British army. Frederick enlisted at Kensington, NSW on 1 September 1914 into the 1st Battalion, Australian Imperial Force. The battalion formed part of the 1st Brigade, 1st Australian Division, and sailed for Egypt in October 1914. The Australians were supposed to train for service in France, but instead were diverted to Gallipoli, landing on the Peninsula on 25 April 1915. Frederick was killed by a shell which landed at Courtney’s Post on 7 July 1915. He was 38 years old, and was buried by his comrades at Shrapnel Gulley. His grave couldn’t be located after the war, so Frederick is commemorated on the Lone Pine Memorial, Gallipoli. Fred’s belongings were collected by his Commanding Officer, Captain Alfred Shout, who was later to win the Military Cross and Victoria Cross at Lone Pine. 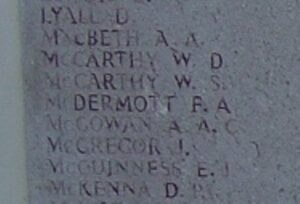 Edgar George Rees, Second Lieutenant, Royal Welsh Fusiliers. Edgar was born in 1891, the son of Thomas Vicary Rees and Annie Mary Rees, of The School House, Llanllwch. He enlisted into the 13th Royal Welsh Fusiliers in October 1914, and served with them in France from December 1915, where they were attached to 113 Brigade, 38th (Welsh) Division. After returning home on leave, when he married Gwenllian Lewis, of 44, Mount Libanus, Treherbert, he was commissioned in 1916, and posted to the 19th Battalion, Royal Welsh Fusiliers, which was attached to 119 Brigade, 40th (Bantam) Division. The Division had moved to France in June 1916, and moved to the front near Loos. Late in 1916 they moved south to the Somme, and fought at the Battle of the Ancre, and remained in the area over the winter. In March, 1917 the Germans withdrew to their shortened line, called the Hindenburg Line, and the 40th Division were one of the Divisions that followed the withdrawal. Later in the year they took part in the Battle of Cambrai, playing an important role in the attack on Bourlon Wood. Edgar was killed in action at Cambrai on 23 November 1917, aged 26. He is commemorated on the Cambrai Memorial, Louverval, France. His three other brothers also served. 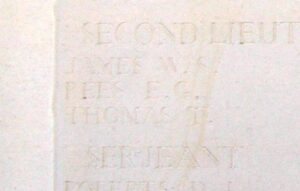 David Eric Williams, Aircraftman 2nd Class, 1047445, Royal Air Force Volunteer Reserve. David was the son of David and Ellen Williams, of Johnstown, Carmarthen. He served in the Royal Air Force, but his squadron is not recorded by the CWGC. David died on active service in hospital at RAF St. Athans on 16 June 1941, aged 20, and is buried at Llanllwch Churchyard. 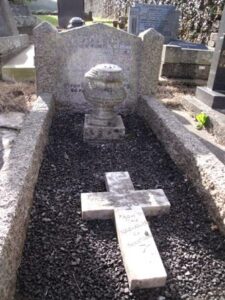