Llanllawddog is a parish which lies about eight miles north of Carmarthen, with part of Brechfa Forest contained within its north-east boundary, and overlooks the River Gwili. Villages which lie inside the parish boundary include Rhydargaeau, Pontarsais and Alltwalis, while villages such as Peniel, Bronwydd Arms and Llanpumsaint nestle close to its borders. I have not yet had the opportunity to explore the area to discover or photograph any war memorials, so the details below are of men known to have come from the area. Any photographs or details of any local war memorials would be most welcome. I have recently been sent photographs of the Peniel and the Llanpumsaint memorials, so they have their own pages on the website.

John Davies, Private, 320373, Welsh Regiment. John was born at Llanllawddog in 1883, the son of John and Mary Davies. The family had moved to Dyffryn Factory, Llanstephan Road, Carmarthen by 1901, and by the outbreak of war John was living at Glyn Cottage, Llangain. He enlisted at Carmarthen into the Pembroke Yeomanry in June 1915, and moved to Egypt with the battalion in 1916. The Pembroke Yeomanry merged with the Glamorgan Yeomanry in 1917 to form the 24th Battalion, Welsh Regiment, which was attached to 231 Brigade, 74th (Yeomanry) Division. The division had been formed in Egypt in January 1917 and took part in the march through Palestine, fighting at the three battles of Gaza, before finally capturing Jerusalem at the end of the year. John was killed at the Third Battle of Gaza on 6 November 1917. He was 34 years old, and is buried at Beersheba War Cemetery, Israel. John left a widow and two children. His brother, William Charles Davies, also fell. 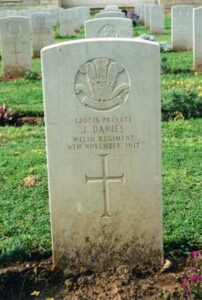 Thomas Davies, Private, 40260, Welsh Regiment. Thomas was the son of Daniel and Sarah Davies, of Penybank Farm, Llanllawddog. He enlisted at Carmarthen into the 9th Battalion, Welsh Regiment, which was attached to 58 Brigade, 19th (Western) Division. The Division crossed to France during 1915, and moved to positions near Loos, where it took part in the Battle of Loos on 25 September 1915. The following year the Division moved to the Somme, where it took part in the second wave of the attack on Ovillers-La Boiselle on 1 July, capturing the village at heavy cost. It then fought through the Somme Battles of Pozieres and the Ancre in 1916. In 1917 the Division moved north to Ypres, taking part in the Battle of Messines Ridge. Thomas was wounded at Messines, and died on 4 May 1917. He was 21 years old, and is buried at Lijssenthoek Military Cemetery, Belgium. There is a memorial to Tom within Llanllawddog Church. 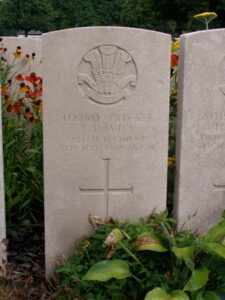 William Charles Davies, Private, 3365, 10th Battalion, Australian Imperial Force. William was born in Llanllawddog, the son of John and Mary Davies. The family had moved to Dyffryn Factory, Llanstephan Road, Carmarthen  by 1901. William had emigrated to Western Australia in 1909 and found work as a Groom near Blackboy Hill. He enlisted there on 17 October 1916 into the Australian Infantry. William embarked at Fremantle aboard the H.M.A.T. Berrima, and arrived at Devonport on 16 February 1917. After several months in camps at Larkhill and Dorrington, where William was court martialled for being absent without leave (for over a week), William was sent among a batch of reinforcements to the 10th Battalion, arriving in France on 22 August 1917. His papers show that he was wounded in Action on 1 October that year, rejoining the Battalion four days later. The next entry in his papers shows that he deserted his post on 1 January 1918, and was apprehended by the Military Police two days later. His trial on 15 February 1918 ended up in his being awarded five years penal servitude, but on 7 March this was suspended and William rejoined his Battalion at the front. The Battalion were by now in Northern France, and the German Offensive was in full swing, with the Australian Corps in the Borre area. William was killed in Action near Borre on 30 May 1918 aged 31 and is buried in Borre British Cemetery. His brother John also fell. 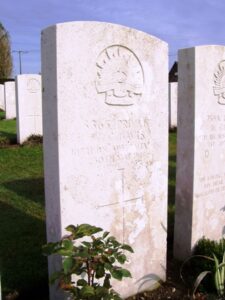 William Lloyd Davies, Second Lieutenant, Royal Welsh Fusiliers. William was born on 3 April 1894, the son of John George Davies, and Mary Davies, of Coombe Park, Peniel.  He was educated at Carmarthen Grammar School, before passing into the University of London, and joined the Artists Rifles in November 1915. William was then commissioned on 7 July 1916, and joined the 13th Battalion, Royal Welsh Fusiliers in Belgium in August. The battalion was rebuilding after its mauling at Mametz Wood, and was attached to 113 Brigade, 38th (Welsh) Division. The Division was in the trenches at Boesinghe when William joined them, and remained here until launching their assault on Pilckem Ridge on 31 July 1917. William was killed during the attack on Pilckem that day, and was reportedly buried at Caesars Nose Cemetery. He now lies in Dragoon Camp Cemetery, Belgium. He was 23 years old. 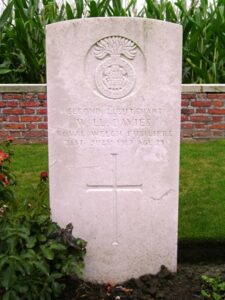 Tom Rees Evans, Private, 66043, Cheshire Regiment. Tom was the son of Edward and Sarah Jones, of Quarry, Llanllawddog. By 1911 the family had moved to 13, Lyle Street, Mountain Ash. Tom enlisted there into the army on 9 November 1916. He served with the 59th Battalion, Training Reserve, before being posted to France on 19 January 1918, joining the 11thy Battalion, Cheshire Regiment. He was then posted to their 15th Battalion, but was only in France for three months before falling ill, and was hospitalised back in England. Tom was sent back to France on 27 July 1918, and posted to the 1/4th Battalion, Cheshire Regiment, which was attached to 102 Brigade, 34th Division. He was killed in action during the final advance in Flanders on 3 October 1918, aged 19, and is buried in Vichte Military Cemetery, Belgium. 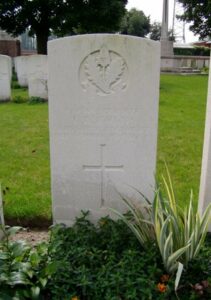 John Clarke Harries, Private, 320401, Welsh Regiment. John was the son of James and Hannah Harries, of Riverside House, Cynwyl Elfed. He returned home from Canada to enlist at Carmarthen into the Pembroke Yeomanry. The Pembroke Yeomanry moved to Norfolk as part of the 1st Mounted Division, before sailing for Egypt in March 1916. After twelve months on the Suez Canal Defences, the Pembroke and Glamorgan Yeomanry merged to form the 24th Battalion, Welsh Regiment, and were attached to 231 Brigade, 74th (Yeomanry) Division. The division took part in the advance into Palestine from March 1917, and fought at the Second and Third Battles of Gaza. Due to the terrible casualties suffered by the British on the Western Front in March and April 1918 the Division was recalled to the Western Front, and arrived at Marseilles during May 1918. They then fought at the Second Battle of Bapaume during the great offensive, and fought in Flanders before returning to the Somme and fighting at the Battle of Épehy, as part of the offensive towards the Hindenburg Line. John was probably wounded at Épehy, and returned to Hospital at Colchester. He died there on 3 October 1918, aged 29, and his body was returned home for burial at Rhydargeau (Horeb) Baptist Chapelyard.

John Isaac, Corporal, 44096, Welsh Regiment. John was the son of Samuel and Sophia Isaac, of the Stag and Pheasant Inn, Alltwalis. He had been born at Llanllawddog, and resided there prior to joining the Welsh Regiment at Carmarthen. John served in France with the 19th Battalion, Welsh Regiment, which was the Pioneer Battalion to the 38th (Welsh) Division. He probably saw action in the Division’s attacks on Mametz Wood and at Pilckem Ridge, but had been posted to Salonika with the 23rd Welsh. He became ill in Salonika and returned back to Cardiff, where he was attached to the 3rd Welsh. John died in hospital at Holgate Hospital, Middlesborough on 9 October 1918, aged 24. He is buried at Llanllawddog (St. Llawddog) Churchyard. 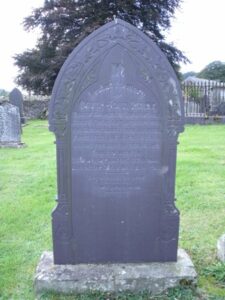 William Alcwyn Lewis, Private, 2381989, Canadian Infantry. William was born on 4 January 1883, the son of John and Elizabeth Lewis, of Peniel Cottage, Rhydargaeau. He had migrated to Canada prior to the war, and resided at 268, Spence Street, Winnipeg. William had enlisted in 1917, but was called up on 17 April 1918, joining the 96th Battalion (Canadian Highlanders), Canadian Infantry. William didn’t serve overseas. He became ill and died on 21 January 1919, aged 36, and is buried at Montreal (Mount Royal) Cemetery, Canada. 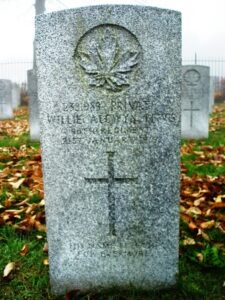