The peaceful village of Llangadog is situated in the Towy Valley, between Llandovery and Llandeilo. Unlike most of the other local towns and villages there seems to be no single main War Memorial at Llangadog, but there are several in the village. St. Cadog’s Church at Llangadog contains a memorial for its parishioners who fell during World War Two, while there are two plaques inside Gosen Chapel which commemorate its members who fell during both world wars. This page commemorates the men named on the Gosen Chapel memorials. 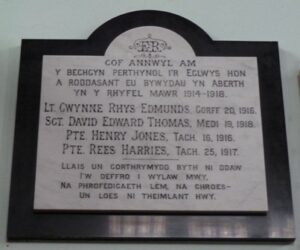 Gwynne Rhys Edmunds, Lieutenant, Royal Welsh Fusiliers. Gwynne was born in London in 1896, the son of Emily Edmunds. Emily was from Llandeilo, and prior to the war had moved the family back to Barons Court, Llangadog. On 3 May 1915 Gwynne was commissioned into the 18th Battalion, Royal Welsh Fusiliers, but was later attached to the 2nd Battalion, Royal Welsh Fusiliers, which had been in France since September 1914 as part of 19 Brigade. The battalion had fought at Mons, Le Cateau and the retreat to the Marne and the Battle of the Aisne. On 12 October the Brigade transferred to the 6th Division and fought at Hooge, east of Ypres, where they transferred to the 27th Division on 31 May 1915. Here they fought at Second Ypres, and then transferred again, to the 2nd Division on 19 August 1915, and fought with them at Loos, and then on 25 November transferred yet again, to the 33rd Division. The 2nd RWF then moved to the Somme, taking up positions at Fricourt. The battalion fought at the Battle of Albert, the opening battle of the Somme Offensive, on 1 July 1916, taking part in the capture of Mametz Village. It moved back into the line after a brief rest, and took part in the attacks on High Wood. This is where Gwynne was killed in action on 20 July 1917, aged 20. He is remembered on the Thiepval Memorial, France. 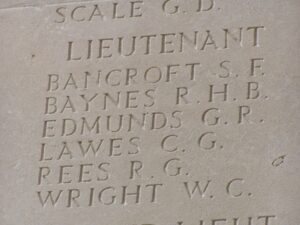 Rees Harries, Private, 84818 Machine Gun Corps. Rees was the son of Rees and Anne Harries, of Currey Cottage, Llangadog. He enlisted at Cardiff into the Welsh Regiment, where he became a Battalion Machine Gunner. On 2 September 1915, a proposal was made to the War Office for the formation of a single Machine-gun Company per Brigade, by withdrawing the guns from the Battalions. They would be replaced at Battalion level by Lewis guns. The Machine Gun Corps was created by Royal Warrant on 14 October 1915. The reorganisation was completed before the Battle of the Somme, which is when Rees transferred into the 9th Company, Machine Gun Corps, which was attached to the 3rd Division The division fought at the Battle of Bazentin, where they captured Longueval, and advanced on to Delville Wood. In November the division fought at the Battle of the Ancre, and saw the Somme Offensive out to a close. In the following year, the Battle of Arras was launched, and the 3rd Division fought at the Battle of the Scarpe. Rees survived the Scarpe and the Battles of Arras in 1917, and took part in the Battles of Third Ypres. After the fighting in Ypres was closed down, the Division moved to take part in the Battle of Cambrai, which is where Rees was wounded. He died of wounds on 26 November 1917, aged 28, and is buried at Favreuil British Cemetery, France. 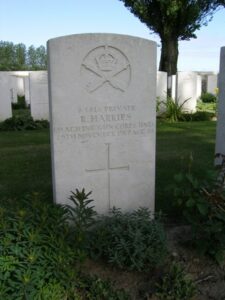 Henry Jones, Private, 474271, Canadian Infantry. Henry was born at Llangadog on 21 July 1884, the son of William and Gwenllian Jones. His parents later moved to Bank-y-Gwin, Llandeilo, and Henry emigrated to Canada prior to the outbreak of war. He enlisted at Saskatoon on 3 April 1916 into the 72nd Battalion (British Columbia), Canadian Infantry, which was part of 12 Brigade, 4th Canadian Division. Henry would have arrived in France in time to take part in the Divisions first battle at Le Transloy, on the Somme, in October 1916. They then fought at the Battle of the Ancre Heights, where the Canadians captured Regina Trench, before taking part in the Battle of the Ancre. Henry was wounded in action at the Battle of the Ancre, and Died of Wounds on 16 November 1916, aged 32. He is buried in Aveluy Communal Cemetery Extension, France.Many thanks to Lynn Armstrong for the photograph of Henry’s portrait. 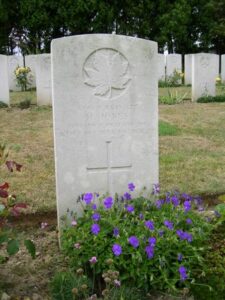 David Edward Thomas, Corporal, 56905, Welsh Regiment. David was the son of Edward and Sarah Thomas, of Ivy Cottage, Llangadog, and enlisted into the Pembroke Yeomanry. He later transferred into the 13th Battalion, the Welsh Regiment, 114 Brigade, 38th (Welsh) Division. The Division had been in France since landing during December, 1915, and had fought in Flanders, on the Somme at Mametz Wood, and then at Third Ypres, and in 1918 were rushed from their winter post of Armentieres to aid with the desperate defence of the Somme area, based around Albert. After the tide of war had turned, after the Allied victory at Villers-Brettoneux on 8 August 1918, the Allies went on the offensive, and swiftly moved towards the mighty Hindenburg Line. It was during the Battle of Épehy, which was to provide the launching pad for the assault on the Hindenburg Line, that David was killed in action on 19 September 1918, aged 26. He is buried at Gouzeaucourt New British Cemetery, France. 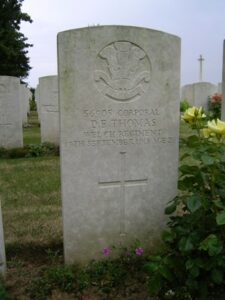 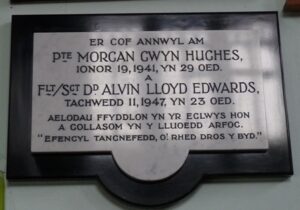 David Alvin Lloyd Edwards, Navigator II, 1656102, Royal Air Force Volunteer Reserve. David was the son of David Thomas Edwards and Margaret Ann Edwards, of Leicester House, Llangadog. He served as a Navigator with 115 Squadron, Royal Air Force, which was a heavy bomber unit, based at RAF Stradishall, and equipped with the Avro Lancaster III. David survived the war, but was found dead on MOD land at Buckenham Tofts, Stanford, Swaffham, Norfolk on 11 November 1947, aged 23. He is buried at Llangadog Church Cemetery. 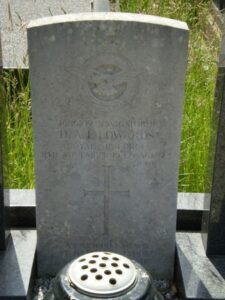 Morgan Gwyn Hughes, Private, 13072700, Pioneer Corps. Morgan was the son of Joseph and Mary Hughes, of Glandyrfal, Llangadog. He served with the Pioneer Corps. Little is known of Morgan’s service, but he died at Stoke Military Hospital, Devonport on 19 January 1941, aged 29, and is buried at Twynllanan Methodist Chapelyard. Morgan is also commemorated on the St. Cadog Church memorial. 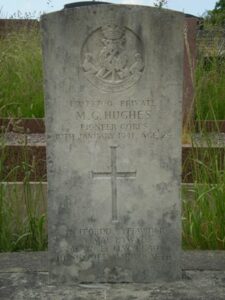