Llanfynydd is a picturesque village, situated about twelve miles East-North-East of Carmarthen, in the Towy Valley, overlooking one of its tributaries, the River Cothi. The village contains a War Memorial which commemorates the five men of the village who fell during the Great War. I have taken the opportunity to add the details of some other men with ties to the village who are not commemorated on the memorial. 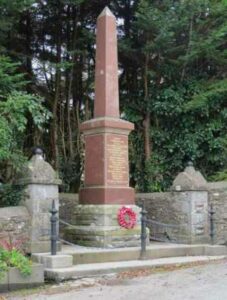 Silvanus Joseph Davies, Private, 41245, Manchester Regiment. Silvanus was the son of David and Ann Davies, of Brynyreglwys, Llanfynydd. He enlisted into the South Lancashire Regiment on 16 February 1916, but in October that year he was posted to the 11th Battalion, Manchester Regiment, which was in France attached to 34 Brigade, 11th (Northern) Division. Silvanus joined the battalion on the Somme, where the battalion took over the line between St. Pierre Divion and Grandcourt. The men remained here until 30 November, when it was relieved, and moved to an old German bunker at St. Pierre Division. Silvanus was killed during the relief that day. He was 22 years old, and is buried at Ancre British Cemetery, Beaumont Hamel, France. The precise location of his grave was lost during further fighting over the area, and today Silvanus is commemorated there by Special Memorial 20. 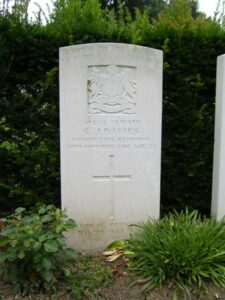 Tom Llewelyn Davies, Second Lieutenant, Royal Engineers. Tom was born in Llanfynydd in 1890, the son of William and Anne Davies. The family later resided in Boddington House, Boddington, near Cheltenham. Tom was commissioned into the Royal Engineers on 18 August 1916 and was posted to the Inland Waterways and Transport section, sailing for Mesopotamia via Egypt. He was killed in action in Iraq on 26 May 1917 aged 27. He is commemorated on the Basra Memorial, Iraq. Tom is not commemorated on the Llanfynydd memorial.

Daniel Ginn, Private, 126146, Machine Gun Corps. Daniel was the son of William and Elizabeth Ginn, of Cefnbrisken, Llanfynydd. He was the Husband of Elizabeth Roderick (formerly Ginn), of 32, Towy Terrace, Ffairfach, Llandeilo. Daniel enlisted at Ammanford into the Machine Gun Corps, and served with their 59th Battalion, which was attached to the 59th Division. The Division had served in Ireland since April 1916 and in January, 1917 moved to England preparatory to a move to France in February. They then followed the German withdrawal to the Hindenburg Line in March, and fought at Third Ypres, at the Battles of the Menin Road and Polygon Wood. In November they moved south, and took part in the Battle of Cambrai, and remained in the area over the winter of 1917/18. The German Spring Offensive hit the area on 21 March 1918, and the Machine Gunners were the first troops hit. Daniel was Killed in Action on 21 March 1918 aged 23, and is remembered on the Arras Memorial. 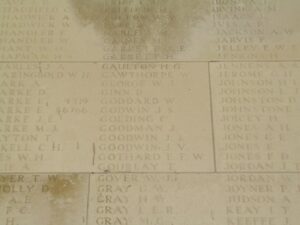 Benjamin Thomas Jones, Private, 38726, Yorkshire Regiment. Benjamin was born at Capel Isaac, the son of Thomas Jones. His mother had died by 1901, and in 1908 his father remarried, moving the family to 15, Gelly Road, Glanamman. Benjamin enlisted at Neath into the army, and was posted to France at some time in 1916, joining the 10th Battalion, Yorkshire Regiment, which was attached to 62 Brigade, 21st Division. The division moved to the Somme in 1916, and fought throughout the offensive, wintering on the Somme before moving to Arras in April 1917. Benjamin was killed in action during the First Battle of the Scarpe, on 11 April 1917, aged 26. He is commemorated on the Arras Memorial, France. Benjamin is not commemorated locally. Benjamin is not commemorated on the Llanfynydd memorial. 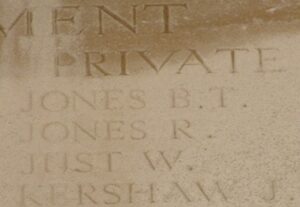 Henry Jones, Private, 2133, Pembroke Yeomanry. Henry was the son of William and Sarah Jones of Nantgwili, Llanfynydd, and the Husband of Margaret Anne Jones, of Onen House, Llanfynydd. He enlisted at the outbreak of war into the Pembroke Yeomanry, and in March 1916 the Battalion moved to Egypt as part of the 1st Mounted Division, to guard the Suez Canal Defences. Henry became ill in Egypt, suffering badly from dysentery. He was hospitalised at Cairo, but died there on 4 May 1916, aged 30. Henry is buried at Cairo War Memorial Cemetery, Egypt.

Moses Jones, Private, 320224, Welsh Regiment. Moses was born at Llanfynydd, the son of Moses and Harriet Jones. By 1891 the family was residing at 75, Water Street, Carmarthen. Moses worked as a Painter and Decorator, and married Hannah Jeremy in 1902, living with his wife and their two children at Conwil Elfed. He joined the Pembroke Yeomanry at the outbreak of war. In March 1916 Moses sailed for Egypt with the Yeomanry, and spent the next twelve months fighting against Senussi Tribesmen in Egypt. In March 1917 the Pembroke and Glamorgan Yeomanry merged to form the 24th Battalion (Pembroke & Glamorgan Yeomanry), Welsh Regiment, which became attached to 231 Brigade, 74th (Yeomanry) Division. The Division took part in the Palestinian campaign, and it was here, during the Third Battle of Gaza, that Moses was killed on 6 November 1917, aged 37. Moses has no known grave, and is commemorated on the Jerusalem Memorial, Israel. Moses is not commemorated on the Llanfynydd memorial. 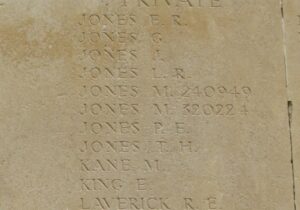 John James Thomas, Private, 320114, Welsh Regiment. John was the son of David and Mary Thomas, of Troedyrhiw Farm, Llanfynydd. He enlisted at Pantglas into the Pembroke Yeomanry at some time prior to the war. In March 1916 John sailed for Egypt with the Yeomanry, and spent the next twelve months fighting against Senussi Tribesmen in Egypt. In March 1917 the Pembroke and Glamorgan Yeomanry merged to form the 24th Battalion (Pembroke & Glamorgan Yeomanry), Welsh Regiment, which became attached to 231 Brigade, 74th (Yeomanry) Division. The Division took part in the Palestinian campaign, fighting in the Second and Third Battles of Gaza. John was killed during the capture of Jerusalem, on 18 December 1917, aged 29. He is buried at Jerusalem War Cemetery, Israel. 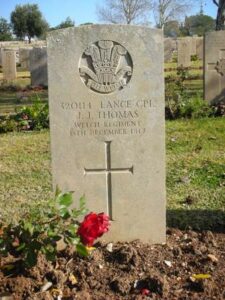 Thomas Williams, Private, 4123, Welsh Regiment. Thomas was born in Pembroke. He later moved with his parents William and Elizabeth Williams, to Graig, Llanfynydd, where Elizabeth took up the post of Headmistress at Clawddowen schoolhouse. At the outbreak of war, Thomas enlisted at nearby Llandeilo into the 1/4th Battalion, the Welsh Regiment. The 1/4th Battalion had moved to Gallipoli, landing on 9 August 1915 as part of 159 Brigade 53rd (Welsh) Division, and were thrown immediately into terrible fighting. After suffering heavy casualties, the Division remained on Gallipoli throughout the coming winter, where many men suffered severe hardships due to the terrible conditions there. Thomas was taken ill at some stage, and brought back to the Military Hospital at Malta, where he died of pneumonia on 7 December 1915, aged 23. He is buried in Pieta Military Cemetery, Malta.