The Spanish Civil War was fought from 17 July 1936 to 1 April 1939 between the Republicans, who were loyal to the established Spanish Republic, and the Nationalists, a rebel group led by General Franco. Germany sent its Condor Legion to Spain to fight for the Nationalists, while International Brigades were formed to support the Republicans. Amongst the members of the International Brigade were many British men, who believed that they were fighting against Fascism. With the might of the Germans behind them, the Nationalists prevailed, and Franco ruled Spain until his death in 1975. Men from Llanelli fought with the International Brigade, and four of these men are commemorated on a war memorial which is located at the Plaid Cymru Headquarters at 11, John Street, Llanelli. 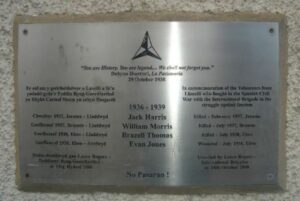 “You are History. You are Legend… We Shall not Forget You.”

In commemoration of the volunteers from Llanelli who fought in the Spanish Civil War with the International Brigade in the struggle against Fascism.