Following several years of research and fund raising a new war memorial will shortly be unveiled in Llanelli which will commemorate the men of the district who have fallen in action in the conflicts which have taken place since the end of World War Two in 1945. The memorial has been the brainchild of Ian Kirkpatrick, who lost his son Jamie in Afghanistan in 2010. Fund raising has been carried out by the members of the Llanelli Memorial Fund over the past six years and the memorial was unveiled on 4 November 2016. I am proud to have been able to help Ian with researching the names to be engraved on the memorial. 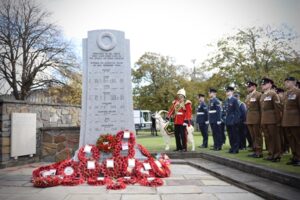 Noel Benjamin Wilkins, Gunner, 14452128, Royal Artillery. Noel was born at Llanelli on 15 December 1926, and lived at 553, Glas Fryn, Dafen. He served with the Royal Artillery in Palestine. He was killed on 29 February 1948 while travelling on the Cairo-Haifa train that struck a mine which had been laid by Jewish activists. He was 21 years old and is buried in Ramleh War Cemetery, Israel.

David Levan Horton, Private, 22398204, Royal Welch Fusiliers. David was born at Llanelli on 24 February 1932. He served with the Royal Welch Fusiliers, and was one of just over 100 Fusiliers who were sent to Korea as reinforcements for the Welch Regiment. David was killed in Korea on 15 June 1952, aged 20 and is buried in the United Nations Memorial Cemetery, Pusan.

Vaughan Price Hurren, Rifleman, 22511772, Royal Ulster Regiment. Vaughan was born on 29 November 1928, the son of Vaughan Price Hurren and Sarah Jane Hurren (née John), of Llanelli. He served with the 1st Battalion, Royal Ulster Rifles. Vaughan was killed in action in Korea on 26 April 1951, aged 22, and is buried in the United Nations Memorial Cemetery, Pusan. His brother Douglas died during the Malayan Emergency.

Richard Arnold Lavender, Lance Corporal, 22666363, Royal Fusiliers (City of London Regiment). Richard was born at Llangennech on 15 February 1934, the son of Edward Richard Lavender and Elizabeth Ann Lavender. He served with the 1st Battalion, Royal Fusiliers, alongside a man called Maurice Micklewhite, later to become famous as the actor Michael Caine. The battalion arrived in Korea during July 1952, attached to the 28th Commonwealth Brigade, 1st Commonwealth Division. The division had been formed as part of the UN force sent to Korea after the Korean War had began to escalate, with the fear of a Third World War looming. The 1st RF took part in fighting in Korea from November 1952 onwards, and towards the end of June 1953 took over a position on Hill 355. Richard was killed during heavy fighting here on 28 June 1953. He has no known grave, and is commemorated on the UN Wall of Remembrance, at Pusan, Korea.

Bernard Peters, Corporal, 23386240, Welch Regiment. Bernard was born in Llanelli on 23 May 1938. He served with the Welch Regiment. He was he was killed during an ambush at Ardhana in the Troodos Mountains on 7 October 1958, aged 20. He was originally buried in Wayne’s Keep Cemetery, but his body was later repatriated and buried at Llanelli.

Vernon Bowen, Sergeant (Navigator), 1654380, Royal Air Force. Vernon was born at Cross Hands on 20 September 1923. Details of his service are not known, as the World War 2 service records are as yet unobtainable, but Vernon was serving at Singapore, based at RAF Tengah, as a Navigator with 45 Squadron, Royal Air Force during the Malayan Emergency. The Malayan Emergency was a guerrilla war for independence fought between Commonwealth armed forces and the Malayan National Liberation Army, the military arm of the Malayan Communist Party, from 1948 to 1960. The Royal Air Force flew Avro Lincolns and Bristol Brigands from Singapore on bombing raids over Communist Malaya. Vernon was Navigator of a three man crew of a Bristol Brigand, consisting of Pilot Alan Martin and Radio Operator Peter Weston. On the morning of 15 June 1951, the crew were asked to do an air test on their Brigand VS857 (OB-K), and took off from Tengah just before lunch. The aircraft was headed north and climbing when what seemed like a massive explosion rocked the aircraft, and sent it out of control over Changi Creek, where it crashed moments later. Alan Martin and Peter Weston had survived, but sadly Vernon had been killed in the crash, his body being found underneath the wreckage of the fuselage. A later investigation found that a propeller had broken loose- a common problem on Brigands, and it was that which had made the aircraft lose control. Vernon was 27 years old when he died that day, and his body was interred at Kranji Military Cemetery. 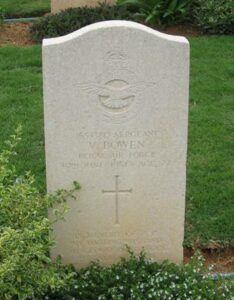 Douglas A Charles Hurren, Private, 21016566, Army Catering Corps. Douglas was born on 14 July 1923, the son of Vaughan Price Hurren and Sarah Jane Hurren (née John), of Llanelli. He served with the Army Catering Corps, and was attached to the Cameronians. Douglas died on 15 July 1951, aged 29, and is buried in Kranji War Cemetery, Singapore. His brother Vaughan was killed during the Korean War.

Albert Eric Pike, Flight Lieutenant, 1315895, Royal Air Force. Albert was born on 23 January 1921, the son of Frank Pike and Janet Pike (nee Llewellyn), of Llanelli. He served with the Royal Air Force, based at RAF Seletar in Singapore. He died on 13 November 1958, aged 37 and is buried in Kranji Military Cemetery, Singapore.

Eirwyn John Phillips, Guardsman, Welsh Guards. Eirwyn was born at Carmarthen on 4 June 1962, the son of William Gwynfor Phillips and Phoebe Violet Phillips (nee Lewis). He served with the 1st Battalion Welsh Guards. Eirwyn was aboard the Troopship RFA Sir Galahad when it was attacked by A4-C Skyhawks of the Argentinian Air Force on 8 June 1982, and was hit by three bombs. The resulting explosions and fire killed 48 men, mostly of the Welsh Guards, but also men of other units. Eirwyn was 20 years old, and is commemorated on the Armed Forces Memorial at Alrewas, Staffordshire.

Nicholas David Mark Thomas, Lance Corporal, 24436475, Welsh Guards. Nicholas was born on 11 May 1957. He served with the 1st Battalion Welsh Guards. Nicholas was aboard the Troopship RFA Sir Galahad when it was attacked by A4-C Skyhawks of the Argentinian Air Force on 8 June 1982, and was hit by three bombs. The resulting explosions and fire killed 48 men, mostly of the Welsh Guards, but also men of other units. Nicholas was 25 years old, and is commemorated on the Armed Forces Memorial at Alrewas, Staffordshire.

Michael James Winkler, Sergeant, 24310380, Royal Corps of Signals. Michael was born in Pembrokeshire on 17 March 1957, the son of Lothar Hans Winkler and Elizabeth Winkler (nee James). He was serving with the Royal Corps of Signals in Northern Ireland during the height of the troubles. On 15 June 1988, Michael, along with a group of other servicemen, were off duty, and had just completed a charity run for local charities in Northern Ireland. Michael, along with five other servicemen, boarded their minibus, which had been parked in the Market Square, Lisburn, County Antrim, when it exploded, killing all six of the men. The minibus had been targeted by the IRA, who had placed a bomb in it. The action of the IRA was rightly condemned, as the men had given up some rare time off to raise money for local charities and were all off duty. Michael was 31 years old. The other soldiers who died in the explosion were; Corporal Ian Metcalf, The Green Howards, aged 36; Lance Corporal Graham P. Lambie, Royal Corps of Signals, aged 22; Signalman Mark Clavey, Royal Corps of Signals, aged 24; Corporal William J. Paterson, Royal Corps of Signals, aged 22, and Lance Corporal Derek W. Green, Royal Army Ordnance Corps, aged 20. Michael’s body was brought home, and he was buried at Llannon Cemetery, near Tumble. (Other sources state St. Non’s Churchyard at Llanon, Ceredigion).

Ryan Lee Francis, Lance Corporal, The Royal Welsh. Ryan was from Llanelli, and had joined the Royal Welsh in 2003, and was deployed to Iraq as a Warrior armoured car driver. He was killed while on patrol with his battle group in the early hours of 7 July 2007, when the warrior armoured vehicle he was travelling in was struck by a roadside bomb. He died instantly at a location in the Hay Al Mudhara district of Basra. Ryan was 23 years old, and was brought home for burial at Llanelli.

David Dennis, Lance Corporal, The Light Dragoons. David was born on 16 May 1980, the son of Roger and Adele Dennis of Llanelli. He joined the Army on 14 February 2003 as a gunner in the Royal Artillery before joining The King’s Troop. Having served with the Gunners for just over two years, he was attached to The Light Dragoons for a six-month tour of Iraq in 2005. On 4 July 2009, he was travelling in an armoured vehicle during Operation Panthers Claw, an operation involving around 3,000 soldiers, to improve security in the area north of Lashkar Gah, clear the Babaji and Malgir areas of insurgents and restore government control before the national elections, when the vehicle was hit by a rocket-propelled grenade, and he was killed. David was 29 years old, and was buried at All Saints Church, Llanelli. He left behind his mother Adele Dennis and his twin brother Gareth of Llanelli, his father Roger, step mother Helen and step brother Matthew of Port Talbot and his fiancée Lisa.

Jamie Kirkpatrick, Corporal, Royal Engineers. Jamie was born in Edinburgh, but lived in Llanelli, with his wife Heidi and their daughter Holly. He had enlisted into the Royal Engineers in 1997, and following his training was posted to Germany. Over the next six years he qualified as a Class 1 Plant Operator Mechanic, and deployed to Iraq on Operation TELIC. During 2009 he gained his Intermediate Explosive Ordnance Disposal qualification, and in April 2010 volunteered for a tour of Afghanistan and was attached back to 33 Engineer Regiment (Explosive Ordnance Disposal). Jamie was deployed to Kajaki in the Sangin District of Helmand Province to work with 40 Commando Royal Marines Battle Group and played a large part in increasing the freedom of movement for the local Afghans by removing Improvised Explosive Devices from key routes as well as conducting life-saving training to members of the Battle Group. The team then moved to support the 1st Battalion Royal Gurkha Rifles Battle Group, Combined Force Nahr-E Saraj (South), and Jamie was killed during a firefight there on 27 June 2010. He was 32 years old.