By the time of the Great War, Llanelli was a hugely industrious town, by far the largest in West Wales. Many men from all over Great Britain came here to work and live, and the population swelled. The Town therefore played a hugely important role in supplying recruits to all three services, army, navy and air force, as well as creating the backbone of several local units, the 15th Welsh (Carmarthen Pals), the 4th Welsh (Territorial), the Welsh Field Company, Royal Engineers (Territorial), and the Pembroke Yeomanry. As well as the main Llanelli Cenotaph, there are numerous smaller memorials located around the town, mainly in the Churches and Chapels of the area, as well as in local schools. This page commemorates the men named on the war memorial which is situated within the Masonic Hall, at Harris Avenue, Llanelli. They were all Freemasons, members of the local lodges. 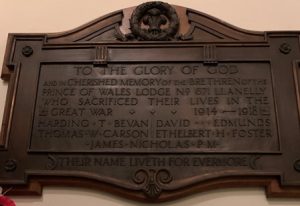 Harding Thomas Bevan, Private, 4616, Honourable Artillery Company (Infantry). Harding was the son of Daniel Bevan and Margaret Bevan (nee Thomas), of Talywern, Llangennech. He was educated at Llanelli Grammar School. Harding worked as a Shipping Manager prior to the war and was a member of the Prince of Wales Lodge, at Llanelli. He enlisted at Armoury House, London on 27 October 1915 into the Honourable Artillery Company, which was attached to 22 Brigade, 7th Division. He embarked for France at Southampton on 29 June 1916, and joined the 1st Battalion, Honourable Artillery Company at Hesdin on 7 July 1916. To the south, the Battle of the Somme had opened on 1 July, but had led to the Allies suffering terribly, so on the afternoon of 7 July the 1st HAC began moving out of the area to join 190 Brigade, 63rd (Royal Naval) Division, which was newly arrived from Egypt, following service at Gallipoli. The Division trained near Coupigny before moving into the line near Notre Dame de Lorette, but at the beginning of October was relieved before moving south to take part in the great Somme offensive. The 1st HAC reached Varennes by 4 October, then five days later moved forwards to Mailly-Maillet, while the 63rd Division took over a section of the front line north of the Ancre, on the left Redan Sector. The 1st HAC moved into the front line here on 12 October to begin its first tour in the Somme trenches. On 13 November, 190 Brigade took part in a meticulously planned assault on the north bank of the Ancre and after several hours of desperate fighting consolidated its gains under heavy shellfire. Further fighting raged over the coming days as the 63rd Division continued to press forward, in terrible conditions. Harding was killed in action here during the Battle of the Ancre, on 15 November 1916. He was 32 years old. Harding probably had a grave at some time, as his personal effects were returned to his parents, but like so many other men who died on the Somme, his grave was lost, and Harding is commemorated on Pier and Face 8A of the Thiepval Memorial, France. He is also commemorated on the war memorials at Llanelli Grammar School and at Llangennech.

Thomas Wright Carson, Second Lieutenant, West Riding Regiment. Thomas was born at Sunnyside, Sutton-in-Craven on 29 November 1884, the son of Reverend William Carson, Vicar of Girlington, Bradford, and Fanny Carson (nee Bairstow), of Salisbury Street, Skipton, Yorks. His father had sadly died just prior to his birth. Thomas was educated at the Royal Grammar School, East Road, Lancaster before training as a Solicitor. He came to Llanelli in 1908 to work as a Solicitor for Roderick and Richards Solicitors, and lived at New Road, Llanelli, where he became a member of St. David’s Lodge. Thomas was commissioned as Second Lieutenant into the 2/6th Battalion, West Riding Regiment on 6 October 1914. Thomas embarked for France on 3 November 1915 and was posted to the 1/6th Battalion, (Duke of Wellington) West Riding Regiment, which was in the Ypres Salient, attached to 147 Brigade, 49th (West Riding) Division. On the night of 27 December 1915, Thomas volunteered to lead a patrol out into No Man’s Land at Hill 62, to examine and report on the enemy’s barbed wire entanglements. The patrol was forced to go to ground when a German flare was fired into the sky, illuminating the battlefield, but when darkness returned, no trace of Thomas could be found by his men. He failed to return to his trenches after the raid and was reported as missing. It was eventually reported, via the Red Cross, that some German troops had found his dead body lying in No Man’s Land and had buried him behind their lines. Thomas was later officially declared as having been killed in action on 27 December 1915, aged 31. His grave was discovered in Langemarck German Cemetery during the post-war battlefield clearances and on 23 July 1929, Thomas was re-interred in Sanctuary Wood Cemetery, Belgium. 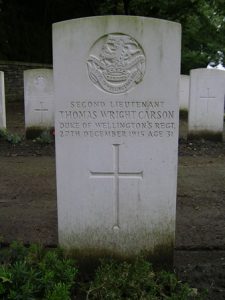 David Gwynne Edmunds, Captain, Welsh Regiment. David was the son of William Price Edmunds and Elizabeth Ann Edmunds (nee Evans), of Anchor House, Burry Port. His father was an ironmonger, and a member of the Prince of Wales Lodge at Llanelli. David was educated at Llanelli Grammar School, before enlisting into the Pembroke Yeomanry, and served with a Motor Despatch unit before being commissioned into the 18th Battalion, Welsh Regiment. The Battalion was attached to 119 Brigade, 40th (Bantam) Division, which was formed between September and December 1915, composed of bantam units and others which had a mixture of regulation-height and shorter men. Weeding out of very under-sized or unfit men delayed the training programme, and it was not until late Spring 1916 that the Division was ready to proceed on active service. The Division moved to France during June 1916 and moved to the front near Loos. Late in 1916 the Division moved south to the Somme, and fought at the Battle of the Ancre, before remaining in the sector over the winter. In March 1917 the Germans withdrew to their shortened line, called the Hindenburg Line, and the 40th Division was among the units which followed the withdrawal. Later in the year the Division took part in the Battle of Cambrai and launched an attack on Bourlon Wood on 23 November 1917. The attack was carried out by 119 Brigade, led by the 12th SWB and 19th RWF. The 17th Welsh was in support for the initial assault, but was soon ordered to advance, to support the two attacking battalions. Heavy fighting raged within the wood over the coming days, with the 18th Welsh also being thrown forwards into the fight, and the Division suffered terribly. David was killed in Bourlon Wood on 25 November 1917, aged just 21. He has no known grave, and so is commemorated on the Cambrai Memorial, Louverval, France. David is also commemorated on the Llanelli Grammar School War Memorial and at Burry Port.

Ethelbert Harold Foster, Lieutenant, Welsh Regiment. Ethelbert was the son of Obed Foster and Eliza Jane Foster (nee Williams), of Llantwit Fardre. He was educated at Aberdare County School and at the University College, Cardiff, where he graduated BSc in Science. By 1906 Ethelbert was lodging at 21, James Street, Llanelli, where he worked as a Science Master at the Llanelli County Intermediate School, and on 10 May 1909 became a member of the Prince of Wales Lodge in the town. He was commissioned as Second Lieutenant into the 4th Battalion, Welsh Regiment. Ethelbert embarked for France on 25 October 1916 and was attached to the 1/8th Battalion, London Regiment (Post Office Rifles), which was attached to 140 Brigade, 47th (2nd London) Division. He was wounded soon afterwards and upon his recovery was posted to the 14th (Swansea) Battalion, Welsh Regiment, which was attached to 114 Brigade, 38th (Welsh) Division. The Division had been holding the Canal Bank sector of the line north of Ypres, at Boesinghe since October 1916. On 31 July 1917 the Division launched its famous assault on the Pilckem Ridge, capturing Iron Cross and reaching its objective of the Steenbeek, then played a supporting role in the Battle of Langemarck. The Division was transferred to the Sailly-sur-la-Lys sector in September, and remained in the area over the winter before being moved to positions north of Albert, at Bouzincourt Ridge, at the end of March 1918, relieving the battered 2nd and 47th Divisions. It held this sector, again carrying out minor operations and trench raids, over the coming months, before taking part in the great offensive of 21 August 1918, and began its advance towards the Hindenburg Line. Over the coming days the Division recaptured Thiepval, Pozieres, Mametz Wood and Longueval, before pushing on and taking Morval and Sailly-Saillisel. The Division then crossed the Canal du Nord near Étricourt-Manancourt before continuing its push towards the Hindenburg Line. On 8 October 1918 the 38th (Welsh) Division attacked the German line at Villers-Outréaux. The 14th Welsh followed up the assault in conjunction with the 15th Welsh, aided by tanks, before assaulting Mortho Wood. Ethelbert was killed in action during the attack on Mortho Wood on 8 October 1918, aged 35. He was originally buried in Mortho Wood British Cemetery, but the cemetery was cleared during the post-war battlefield clearances and on 10 April 1923, Ethelbert was re-interred in Bois-Des-Angles British Cemetery, Crèvecœur-sur-l’Escaut, France. 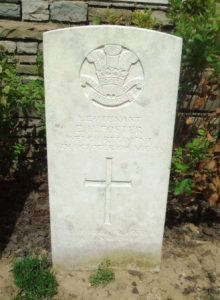 James Nicholas, Lieutenant, 6816, Royal Army Medical Corps. James was born at Penclawdd in 1871, the son of James Nicholas, a cabinet maker, and Mary Ann Nicholas (nee Rudell). The family moved to Llanelli, but his father died when he was young, so his mother moved back to her mothers in Penclawdd. By 1881 Mary was running her own guest house at Broad Street, Ilfracombe, then by 1901 Mary and James were living at Roath, Cardiff, where James was working as an accountant. In 1908 James became a member of the Prince of Wales Lodge at Llanelli. He was commissioned as Second Lieutenant into the 2nd Welsh Field Ambulance, Royal Army Medical Corps, a Territorial Army unit, soon after the outbreak of war, and became Quartermaster to the unit, which was attached to the Welsh Division. James appears to have served in Gallipoli, probably with the 1st Welsh Field Ambulance, which was attached to the 53rd (Welsh) Division. He returned to Britain after the Gallipoli evacuation, but had become ill due to the rigours of the campaign there. James died in hospital in London on 6 January 1917, aged 45. He is buried at the City of Westminster Cemetery, Hanwell, London. 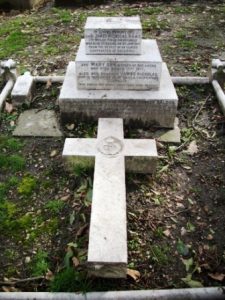