Glenalla Chapel was built at Glenalla Road, Llanelli in 1909 as a Welsh Calvinistic Methodist Chapel, and served Llanelli until its closure in 1987. It has since been bought by Llanelli Town Council, and is in use as a Civic Hall. Inside the Chapel is a marble war memorial which is dedicated to the members of the chapel who fell during both World Wars. The photograph of the memorial was kindly sent in by Mr Huw Edwards. 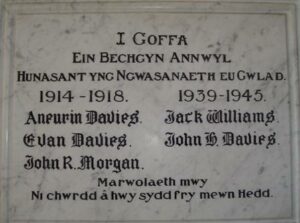 Aneurin Davies, Private, 34583, Rifle Brigade. Aneurin was born on 9 August 1893, the son of Thomas and Rachel Davies, of 29, Long Row, Swansea Road, Llanelli. He had been a tin-worker before enlisting into the 7th (Queen’s Own) Hussars on 10 July 1912. Aneurin was badly injured when his horse reared up and fell on him while training at Shorncliffe riding school, and spent several months in hospital before being discharged from the Hussars as unfit on 8 December 1913 after having been diagnosed with pleurisy. Aneurin then took up work as a Draper at Seaford, Sussex, and re-enlisted at Winchester on 15 March 1915 into the Rifle Brigade. Aneurin was posted to France with the 1st Battalion, Rifle Brigade on 1 June 1915. He was shot in the right hand at Ypres on 9 July 1915, and was discharged from the Rifle Brigade on 8 June 1916, before returning to Llanelli. Undeterred, Aneurin again re-enlisted at Carmarthen on 23 October 1917 into the 6th Battalion, Rifle Brigade. Aneurin was discharged from the army again on 12 February 1918 after being deemed unfit for service, being diagnosed with tuberculosis, and again returned to Llanelli. He died at 29, Long Row, Llanelli on 12 April 1919, aged 24, and was buried at Box Cemetery. Aneurin’s case was submitted to the CWGC by myself in August 2013 and he was accepted for commemoration on 2 October 2015. 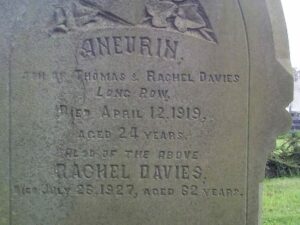 Evan Davies, Private, 202823, Oxfordshire and Buckinghamshire Light Infantry. Evan was the son of David and Mary Davies, of Rhoslwyn, Bridge Street, Llanddewi Brefi, Cardiganshire. He resided at Llanelli prior to the war, and enlisted there into the Welsh Regiment. He was later posted to France, where he joined the 2/4th Battalion, Ox and Bucks Light Infantry, which was attached to 184 Brigade, 61st (2nd South Midland) Division. The Division moved to the Western Front in May 1916, and took part in the disastrous assault on Fromelles on 19 July 1916. In March 1917 the Division followed the German retreat to the Hindenburg Line, and later that year fought at the Battle of Langemarck. The Division then moved south, and took part in the Battle of Cambrai. During March 1918 the Division was in the front line near Ham when it was hit by the German offensive of 21 March 1918. Evan was killed a day later, on 22 March 1918. He was 21 years old, and is buried at Ham British Cemetery, Muille-Villette, France. 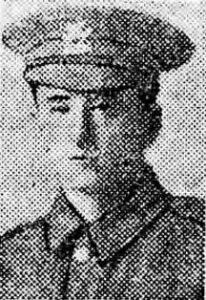 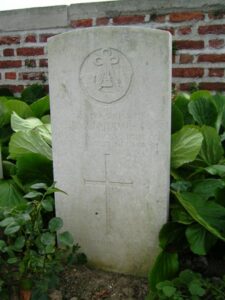 John Richard Morgan, Gunner, 188097, Royal Field Artillery. John was the son of David Morgan, of Glenydd, Havard Road, Llanelli. He had remained in the army after the war, becoming a regular soldier, and sailed for India with the 1st Ammunition Column, 16th Brigade, Royal Field Artillery, to take part in actions on the Northwest Frontier. John became ill and was taken to the hospital at Peshawar on 1 July 1919, where he was found to have contracted enteric fever. He died at Peshawar on 18 July 1919, aged 32, and was buried there. Because of difficulty in maintaining graves in India, he is commemorated on the Delhi Memorial (India Gate), India.

John Herbert Davies, Sergeant (Air Gunner), 1315508, Royal Air Force Volunteer Reserve. John was the son of John Henry and Margaret Davies, of Llanelli. He served as a Air Gunner with 100 Squadron, Royal Air Force, which was a heavy bomber unit, based at RAF Waltham, and equipped with the Avro Lancaster III. John was one of six crewmen killed when their Lancaster was brought down over Holland on 29 June 1943. He was 21 years old, and is buried alongside his former crew members at Eindhoven (Woensel) General Cemetery, Netherlands.

David John (Jack) Williams, Corporal, 967360, Royal Air Force Volunteer Reserve. Jack was the son of Sidney and Eleanor Williams, of Llanelli. He served with the Royal Air Force, and was based in India during the war. The RAF was in India to protect the country from the possibility of attack by the Japanese. Little is known of Jack’s war, but he died in India on 10 March 1944, aged 31, and is buried at Chittagong War Cemetery, Bangladesh.