Ebenezer Chapel is situated in Inkerman Street, Llanelli. It was built in 1881 by the Independent Minister Thomas Thomas of Landore and its schoolroom held only twenty pupils. Inside the chapel is a marble memorial plaque which commemorates the members of Ebenezer and states that three members of the chapel fell during World War One and four during World War Two, but sadly they are not named. The chapel has recently been sold with the intention of being converted into a dwelling. The photograph of the memorial was kindly supplied by Huw Edwards. 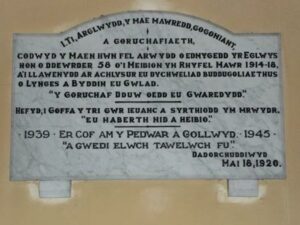 The Enscription on the memorial reads:

Which roughly translates as:

FOR THOU, LORD, YOUR GOODNESS, GLORY,

AND JOY ON THE OCCASION OF VICTORY

OF THE ARMY AND NAVY OF THEIR COUNTRY

“THE SUPREME GOD WAS THEIR REDEEMER”

ALSO, IN MEMORY OF THE THREE YOUNG MEN WHO FELL IN BATTLE.

“THEIR SACRIFICE NOT PAST”

“AND AFTER THE DIN OF BATTLE THERE WAS SILENCE”