Capel Newydd Chapel at Llanelli is situated to the north of the town centre in Heol Felinfoel. It was built in 1809, enlarged in 1821 and then rebuilt in 1828 and 1840. A schoolroom was added in 1901 and a new facade in 1910. I presently only have a photograph of a stained glass memorial window from the chapel, which commemorates World War Two and was kindly supplied by Huw Edwards of the BBC. Two soldiers who died in World War One are buried in its burial ground, but apart from that I have no details of any other war memorial in the chapel. Any information would be gratefully received. 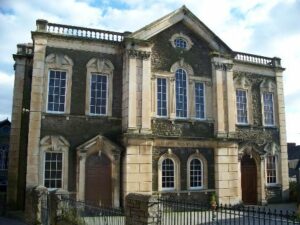 David Jones, Private, 14764, Welsh Regiment. David was the brother of Letitia Jones, of 15, Hick Street, St Pauls, Llanelli. He enlisted there into the 10th Battalion, Welsh Regiment, which was the First Rhondda battalion. The battalion moved to France on 2 December 1914 attached to 114 Brigade, 38th (Welsh) Division, and took part in several famous actions; at Mametz Wood in 1916, Pilckem Ridge in 1917, and the great advance from 21 August 1918. At some time David was transferred to the 114 Brigade HQ (38th Division), then to the 14th Welsh. He was wounded during the final stages of the war, and returned to England, where he was hospitalised. He died of his wounds at the 3rd Western General Hospital, Lansdowne Road, Cardiff on 14 October 1918, aged 33, and is buried at Capel Newydd Calvinist Methodist Chapelyard, Llanelli. 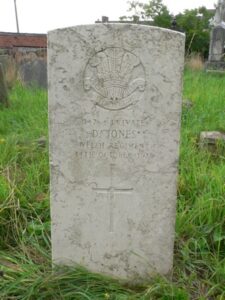 Thomas Samuel, Rifleman, S/3567, Rifle Brigade. Thomas was the son of Evan and Hannah Samuel, of Llanelli. He married Elizabeth Ann Griffiths in 1905, and the couple set up home at 7, Sandy Gate, Llanelli. Thomas enlisted at Cardiff into the army, and was posted to the 7th Battalion, Rifle Brigade, which was in France attached to 41 Brigade, 14th (Light) Division. The Division was to see its first action during the Action of Hooge, where the Division were the first to be attacked by the German use of flamethrowers. They then fought at the Second attack on Bellewaarde. In July, 1916 they moved to the Somme, and fought at the Battle of Delville Wood, and then the Battle of Flers-Courcelette. Thomas was wounded on the Somme, and brought home, where he died at King George’s Hospital, London on 26 August 1916, aged 32. He was buried at Capel Newydd Calvinist Methodist Chapelyard, Llanelli.