Bethel Chapel was built in 1840, and is located at Copperworks Road, Llanelli. Inside the Chapel is a glazed parchment memorial, which contains the names and regimental details of 144 members of the chapel who served in the First World War, including twelve members who fell. The memorial was unveiled on Wednesday 16 April 1919 by Colonel R. A. Nevill, DSO, who had commanded the Welsh Field Company, Royal Engineers in Gallipoli, Egypt and Palestine. The Roll of Honour contains all of these names, and was designed was prepared and executed by Mr. Hughes, Erw, with the names being inscribed by Mr. T. G. Anfield, and Mr. John Smith was responsible for the massive frame. The photograph of the memorial was kindly supplied by David Jones, of Llanelli. 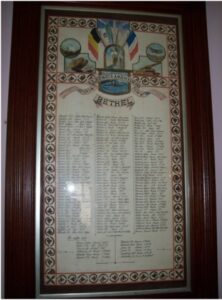 Howell Charles, Private, 4325, Welsh Regiment. Howell, also known as Owen, was the son of Griffith and Hannah Charles, of 11, Caroline Street, Llanelli. He was employed at Llanelli Copper Works before the war, and enlisted at Llanelli into the 1/4th Battalion, Welsh Regiment, which was the local Territorial Battalion, attached to 159 Brigade, 53rd (Welsh) Division. The Division landed at Cape Helles, Gallipoli, on 9 August 1915, and was immediately thrown into action, spending the next few days in isolated pockets, fighting against a Turkish counter-attack. Owen was killed here on 10 August 1915. He was just 19 years old, and is commemorated on the Helles Memorial, Gallipoli.

William Gordon David, Private, 36364, Welsh Regiment. William was the son of John and Mary Jane David, of 54, Bryn Road, Llanelli. He enlisted there into the South Wales Borderers. William later transferred into the 1st Battalion, Welsh Regiment, which was attached to 84 Brigade, 28th Division. The Division formed in England between December 1914 and January 1915 from regular units returning from India, Singapore and Egypt. During January 1915 it moved to France, landing at Le Havre and moved to the Western Front, where it saw its first major action during the Second Battle of Ypres. The Division suffered heavy casualties, and rebuilt before taking part in the Battle of Loos. William was killed at Loos on 2 October 1915, aged 27. He is commemorated on the Loos Memorial, France. 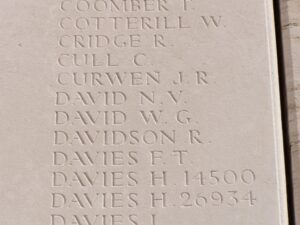 Frederick William Davies, Sergeant, 63129, Welsh Regiment. Frederick was the son of William and Hannah Davies, of 15, Bury Street, Seaside, Llanelli. He worked as a Tinplater prior to enlisting into the 4th Welsh on 26 October 1914. Frederick served at Gallipoli with the 1/4th Welsh, before transferring to the 11th Battalion, Welsh Regiment in February 1917. The battalion was in Salonika attached to 67 Brigade, 22nd Division. Frederick was killed during the Battle of Doiran on 18 September 1918. He was 25 years old, and is buried at Doiran Military Cemetery, Greece. 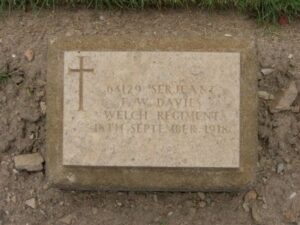 Thomas Edwards, Private, 12776, South Wales Borderers. Thomas was the son of Maria Reynolds, of 33, Marine Street, Llanelli. He enlisted there into the 4th Battalion, South Wales Borderers. The battalion was attached to 40 Brigade, 13th (Western) Division, which landed at Cape Helles, Gallipoli from 6 July 1915, relieving the 29th Division. They left and returned to Mudros at the end of the month, and the entire Division landed at ANZAC Cove between 3 and 5 August, 1915, taking part in the Battle of Sari Bair. Thomas was killed here on 10 August 1915, aged 31. He is buried at No. 2 Outpost Cemetery, Gallipoli. 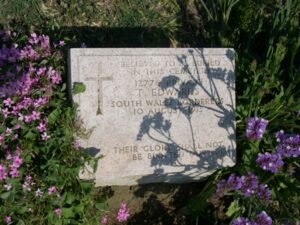 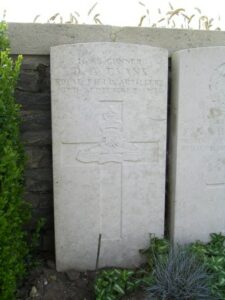 David Jones, Private, 14379, South Wales Borderers. David was born at Llanelli, and enlisted there into the 6th Battalion, South Wales Borderers. The battalion was the Pioneer battalion to the 25th Division, and had moved to France on 23 September 1915. The Division had fought on the Somme in 1916, and the following year saw much action at Passchendaele. During 1918 they suffered heavy casualties during the German Spring Offensive, before taking part in the great advance later that year. David was taken ill during the time of the Battle of the Selle, and died in hospital on 4 November 1918. He is buried at Terlincthun British Cemetery, Wimille, France. 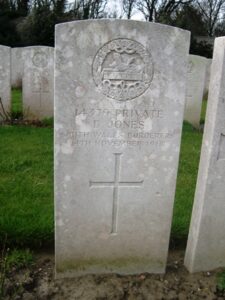 Henry George Mathias, Private, 12397, South Wales Borderers. Henry was the son of Thomas and Martha Jane Mathias, of 36, Catherine, Seaside, Llanelli. He was one of the first Llanelli men to enlist in August 1914, and joined the 4th Battalion, South Wales Borderers, which was attached to 40 Brigade, 13th (Western) Division. On 13 June 1915 the Division sailed for Alexandria, and landed at Cape Helles, Gallipoli from 6 July 1915, relieving the 29th Division. They left and returned to Mudros at the end of the month, and the entire Division landed at ANZAC Cove between 3 and 5 August, 1915, taking part in the Battle of Sari Bair. Henry was killed here on 11 August 1915. He was 21 years old, and is buried at Azmak Cemetery, Suvla, Gallipoli. 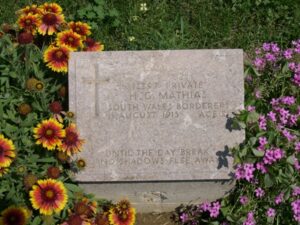 Walter John Nicholas, Rifleman, 13318, Royal Irish Rifles. Walter was the son of John and Catherine Nicholas, of 30, Custom House Bank, Sea Side, Llanelli. He enlisted at Llanelli into the army, and was posted to France with the 2nd Battalion, Royal Irish Rifles, which was attached to 74 Brigade, 25th Division. Walter was bringing in some German prisoners near Ypres on 19 January 1916, when the group was hit by a shell, killing Walter, and wounding his comrade, Private Donovan. Donovan managed to get back to the Irish lines with the surviving prisoners, who carried Walter’s body with them. He was 19 years old, and is buried at Tancrez Farm Cemetery, Belgium.

Thomas Myrddin Owen, Ordinary Seaman, Z/5277, Royal Navy. Thomas was born at Swansea on 8 November 1900, the son of John and Elizabeth Owen. The family had moved to Queen Victoria Street, Llanelli prior to the war, and Thomas enlisted into the Royal Navy. He was based at the Royal Naval Depot at Crystal Palace when he took ill and died on 9 October 1918, aged 17. Thomas is buried at Box Cemetery, Llanelli.

David Thomas, Sapper, 448274, Royal Engineers. David was born at Eglwyswrw in 1887, the son of Thomas and Ellen Thomas. The family moved to 102, Sandy Road, Llanelli prior to 1911. David married Agnes Thomas in 1908, and the couple resided at 9, Marine Street, Llanelli. He enlisted at Llanelli into the Royal Engineers, and served with the 436th Field Company. David was killed in action during the Battle of Nabi Samweil on 26 November 1917, aged 30, and is remembered on the Jerusalem Memorial, Panel 9. 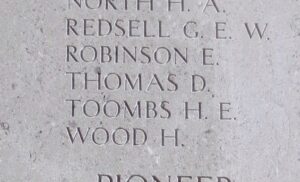 John Charles Williams, Private, 201121, Welsh Regiment. John was the son of George and Elizabeth Williams, of 27, Stepney Place, Llanelli. He enlisted at Llanelli into the 4th Welsh, and was posted to France in 1917 as a reinforcement for the 15th Battalion, Welsh Regiment, the Carmarthen Pals battalion, which was attached to 114 Brigade, 38th (Welsh) Division. John would have joined the Division at Ypres, and possibly fought at Pilckem Ridge. After wintering in the Armentieres sector, the Division moved to the Somme in April 1918, and remained here until the 15th Welsh crossed the River Ancre on 21 August 1918, creating bridgeheads for the remainder of the Division to cross, when they began their great advance towards the Hindenburg Line. John was killed during the Second Battle of Bapaume, on 4 September 1918. He was 35 years old, and is buried at Morval British Cemetery, France. 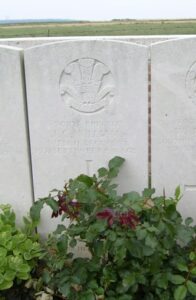 The Heroes Of Bethel

Below is a list of the names on the roll: