Llandybie is a former mining town, situated about two miles north of Ammanford. The Parish Church, which is dedicated to St. Tybie, contains two brass memorial plaques, which commemorate the men of the Parish who fell during both World Wars. There are two other memorials in Llandybie Memorial Hall which contain the same names. Situated in the towns High Street was Llandybie Wesleyan Chapel, Capel Wesle, which catered for the spiritual needs of many of the residents of the town. Inside the church, which is now a pensioners’ hall, was a marble war memorial plaque, which commemorates four parishioners who fell during the Great War. It was removed from the Chapel when it closed in 1973 and was re-installed inside St. Tybie’s Church. 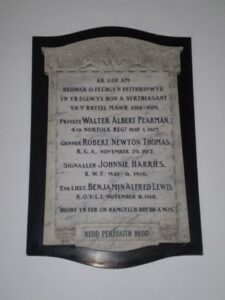 John Harries, Private, 40951, Royal Welsh Fusiliers. John was the son of John and Catherine Harries, of Oaklands, Llandybie. He enlisted at Llandeilo into the army, and was posted to France, joining the 13th Battalion, Royal Welsh Fusiliers, which was attached to 113 Brigade, 38th (Welsh) Division. In the summer of 1915 the Battalion moved with the remainder of the Welsh Division to Morn Hill Camp, Winchester, where it completed its training and equipping, and embarked for France from Folkestone on 5 December 1915, disembarking at Boulogne the same day. During the winter and spring of 1916 the Battalion held the line in French Flanders, and then moved south to the Somme, where they fought at Mametz Wood. After a year in reserve, they fought at Pilckem Ridge and Langemarck in Third Ypres, and were back on the Somme in 1918 facing the German Offensive, having escaped the carnage in Flanders. John was wounded during the German attack over the Somme battlefields, and was evacuated to a casualty clearing station, where he died of wounds on 6 May 1918, aged only 20. He is buried at Varennes Military Cemetery, France. 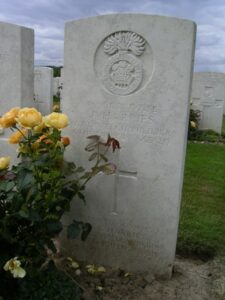 Benjamin Alfred Lewis, Second Lieutenant, Kings Own Yorkshire Light Infantry. Benjamin was the son of John and Mary Lewis, of Bryn-Y-Wawr, King’s Road, Llandybie. During January 1918 he was commissioned into the 2nd Battalion, King’s Own Yorkshire Light Infantry, which was part of 97 Brigade, 32nd Division. The Division had fought on the Somme in 1916, and followed the German retreat to the Hindenburg Line before fighting at the Battle of Arras in Spring, 1918 when the German Offensive targeted the ancient City. They fought during the Battle of Amiens, where the Germans were stopped on 8 August 1918, and from then on took the offensive pushing back from Albert towards Bapaume and the Hindenburg Line. After the Hindenburg Line was broken, the Division crossed the Sambre River. This is where Benjamin was killed in action on 8 November 1918, just three days before the end of the war. He was 23 years old, and is buried at Avesnes-Sur-Helpe Communal Cemetery, France. 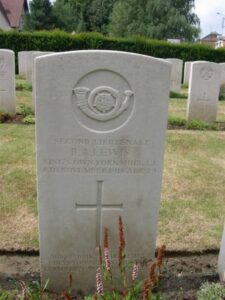 Walter Albert Pearman, Private, 203551, Norfolk Regiment. Walter was born in Marham, Norfolk, the son of Robert and Sarah Pearman, of Thistle Hill, Hilgay, Downham Market, Norfolk. He had been a farm labourer prior to moving to Llandybie, where he became a well-known Wesleyan preacher. He enlisted at Ammanford into the army and was posted to the 9th Battalion, Norfolk Regiment, his home Regiment. The Battalion formed part of 71 Brigade, 24th Division, and landed at Boulogne on 25 May 1915. On 11 October 1915 the Brigade transferred to the 6th Division, and fought at the Battles of Flers-Courcelette, Morval and Le Transloy during the Somme Offensive. In late April 1917 they were near Arras, taking part in the Battle of Arras, and in the subsidiary Battle of Hill 70. On 1 May 1917 the 9th Norfolk’s were in the front-line trenches near Loos. C Company of the battalion were resting in two deep dugouts in their trench when the Germans opened up a brief artillery barrage onto their line, collapsing the dugout entrances. Despite struggling for hours to rescue the trapped men, the survivors were unable to re-open the dugouts, and withdrew from the trenches that night after having suffered the loss of one officer and sixteen men wounded and twenty more killed. Walter was one of the men trapped forever in one of the dugouts that day. He was 25 years old and is commemorated on the Loos Memorial, France. 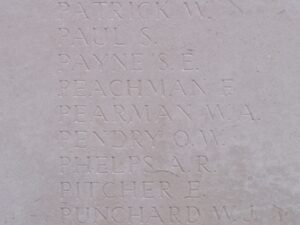 Robert Newton Thomas, Gunner, 72135, Royal Garrison Artillery. Robert was the son of John and Ann Thomas, of London House, Llandybie. He married Mary Annie Thomas at Llandeilo on 26 December 1916 whilst on leave, and Mary set up the family home at 83, Marble Hall Road, Llanelli, where their son Clifford Newton Thomas was born on 21 October 1916. Robert had enlisted at Llanelli on 31 February 1916 into the Royal Garrison Artillery, and was posted to 28 Company, RGA at Portland. He spent almost a year at Bordon before being posted to France, first with the 367th Siege Battery. During August 1917 Robert became ill and spent almost eight weeks in hospital, before being re-posted to the 182nd Siege Battery. He was killed in action during the Third Battle of Ypres, on 29 November 1917, aged 29, and is buried in Menin Road South Military Cemetery, Belgium. 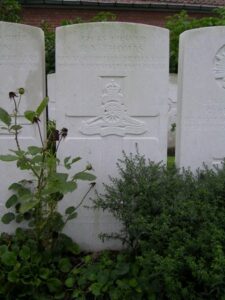