Llandovery Grammar School, like the majority of these once well regarded institutions, no longer exists as a School, as it became a Comprehensive School, Ysgol Gyfun Pantycelyn, which has recently merged with Ysgol Gyfun Tregib to become Ysgol Bro Dinefwr. The former pupils of the former Llandovery Grammar School who fell during World War Two were commemorated on a War Memorial which was unveiled on 11 November 1949 inside the school gymnasium. I do not know if this memorial still exists, but the names have been taken from a copy of the booklet which was published especially for the memorial service that day. Any information about the whereabouts of this memorial, or any photographs of it, would be most welcome if it still exists.

Alfred John Vaughan Crane, Sergeant (Pilot), 1809343, Royal Air Force Volunteer Reserve. Alfred was born on 16 September 1924, the son of Richard Henry and Edith Jane Crane, of Llandovery. After leaving Llandovery Grammar School he served with the 11th Battalion (Durham) Home Guard, before joining the Royal Air Force, and training as a Pilot. He was killed on active service in India on 29 January 1945, aged 20, and is buried at Kirkee War Cemetery, India.

David John Davies, Sergeant, 1315214, Royal Air Force Volunteer Reserve. David was the son of John and Eleanor Mary Davies, of Llandovery, and served as a Wireless Operator/Air Gunner with 37 Squadron, RAF. The Squadron flew the Vickers Wellington X, based at Tortorella, where they flew in the Middle Eastern theatre, and upon the invasion of Italy, the Squadron flew missions from bases there over occupied Eastern Europe. David was killed on 25 May 1944 and is buried at Moro River Canadian War Cemetery, Italy. He was just 22 years old.

Ifor Pershing Davies, Fireman & Trimmer, Merchant Navy. Ifor was born on 15 September 1919, the son of Henry and Annie Davies, of Llangadock. After leaving Llandovery he served in the Merchant Navy aboard the Cardiff registered steamer, S.S. Ruperra. The ship had sailed from New York as part of Convoy HX-79, and was carrying a cargo of steel billets, scrap iron and aircraft, bound for Leith, and was in the mid Atlantic when she was torpedoed and sunk by the German Submarine U-46 on 19 October 1940, with the loss of 31 lives. Ifor was just 21 years old when he died in the sinking, and is remembered on the Tower Hill Memorial, London.

David Ivor James Evans, Sergeant (Nav/Bomber), 1338188, Royal Air Force Volunteer Reserve. David was a Navigator/ Bomber with 103 Squadron, RAF, which flew the Avro Lancaster III, based at Elsham Wolds. On the night of 26 November 1943, 450 aircraft took off from England bound for Berlin and Stuttgart. David’s Lancaster, Serial JB458 piloted by Sergeant E.S. Siddell, was shot down on the outward journey, killing six of her crew of seven. David was 21 years old when he was killed that night, and is buried at Durnbach War Cemetery, Germany.

Frederick James Gunstone, Flight Lieutenant, 139319, Royal Air Force Volunteer Reserve. Frederick was born in Llandovery in 1922, the son of Edward Frank and Emily Jane Gunstone (nee Harries). His father worked for the GWR, and after Frederick and his brother had been educated at Llandovery Grammar School, the family moved to Geddington, Northamptonshire. Frederick married Marjorie Doris Stagnell, of North Chailey, Sussex, in 1943, prior to embarking for the Far East to join 155 Squadron, Royal Air Force. The squadron operated the Supermarine Spitfire, and was based in Madras, with detachments in Burma. Frederick was reportedly killed when he tripped over a guy rope of a tent while carrying a sten-gun on 13 August 1945, aged 23. He is buried in Rangoon War Cemetery, Myanmar. His brother Peter also died on service. 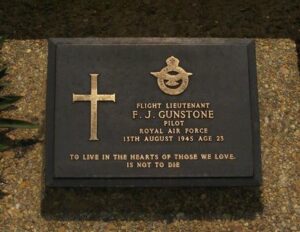 Peter Harries Gunstone, Signalman, 2341675, Royal Corps of Signals. Peter was born in Cardiff in 1917, the son of Edward Frank and Emily Jane Gunstone (nee Harries) . His father worked for the GWR, and after Peter and his brother had been educated at Llandovery Grammar School, the family moved to Geddington, Northamptonshire. Peter enlisted into the Royal Corps of Signals, and was attached to the 38th Division Signals, which was a Welsh based home service unit. He died in Denbighshire on 26 October 1940, aged 23, and is buried in Cardiff (Llanishen) Cemetery. His brother, Frederick James Gunstone, also died on service.

Frederick Norman Jackson, Sergeant, 972564, Royal Air Force Volunteer Reserve. Norman was born in 1917, the son of Albert Frederick Jackson and Clara Elsie Jackson (nee Davies). After leaving Llandovery Grammar School he enlisted into the Royal Air Force Volunteer Reserve. After training as a Wireless Operator/ Air Gunner, he was posted to 10 Squadron, RAF, which was equipped with Armstrong Whitworth Whitley bombers by the outbreak of the Second World War. On 16 April 1941, Norman was aboard Whitley Mk V, Serial Z6557, which took off from RAF Leeming in Yorkshire, bound for Bremen, Germany, as part of a force of 107 heavy bombers. At around 22.40 that night, the Whitworth crashed into the sea near the Dutch Coast, killing all of her crew. Norman is now buried, alongside his former crew-men, at Sage War Cemetery, Germany.

Ieuan Timothy Richard James, Flight Sergeant (Pilot), 1650057, Royal Air Force Volunteer Reserve. Ieuan was the son of Mr and Mrs James of the Caio Post Office. Little is presently known of Ieuan, but he served as a Pilot with 32 Squadron, RAF. In May 1940, the squadron flew patrols over northern France and took part in the defence of south-east England based at RAF Biggin Hill during the opening weeks of the Battle of Britain before moving to northern England at the end of August 1940. Soon after this 32 Squadron converted to the Supermarine Spitfire Mark VC aircraft. Operations included a deployment to Greece, where the squadron took part in the Greek Civil War from September 1944 to February 1945. Ieuan was killed here on 22 October 1944, and is buried at Phaleron War Cemetery, Greece.

Kenneth James, Gunner, 1096410, Royal Artillery. Kenneth was the son of John and Edith May James, of Llandovery. The family moved around the country prior to the war, as John worked with the railways. Kenneth enlisted into the Royal Artillery, and served with 51 (The Westmorland and Cumberland Yeomanry) Field Regiment, Royal Artillery. During World War II the regiment served in Norway, on detachment from the 42nd (East Lancashire) Division. After the evacuation of Norway they moved to the Western Desert, serving with the 7th Armoured Division (Desert Rats) in November 1941. Kenneth was killed in North Africa on 23 December 1941. He was 25 years old, and is commemorated on the Alamein Memorial, Egypt. Within days his brother Ronald also fell. Many thanks to Clive Simons for the photographs. 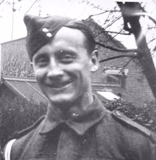 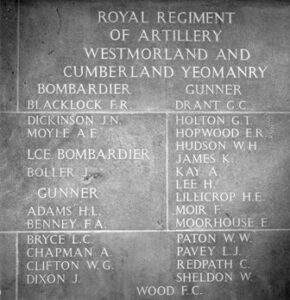 Ronald James, Sergeant, 917059, Royal Air Force Volunteer Reserve. Ronald was the son of John and Edith May James, of Llandovery. The family moved around the country prior to the war, as John worked with the railways. Ronald enlisted into the Royal Air Force Volunteer Reserve, and after training as a Wireless Operator/ Air Gunner, was posted to 405 Squadron, Royal Canadian Air Force. The Squadron was equipped with the Vickers Wellington II. On 28 December 1941, Ronald took off from RAF Topcliffe, as part of a large bomber force, which was to attack three targets in Germany, at Wilhelmshaven, Huls and Emden. His Wellington must have been brought down over Germany that night, as Ronald was killed on 28 December 1941. He was 22 years old, and is buried at Sage War Cemetery, Germany. His brother Kenneth had been killed just five days previously. Many thanks to Clive Simons for the photographs. 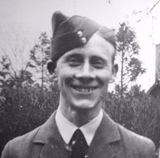 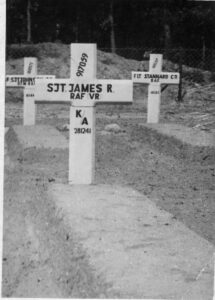 Harold Bowen Jones, Warrant Officer (Air Bomber), 1324221, Royal Air Force Volunteer Reserve. Harold was the son of David and Elizabeth Maud Jones, of Llandovery, and the husband of Winifred Olive Bowen Jones, of Ford, Buckinghamshire. He was posted to 1660 Heavy Conversion Unit at RAF Swinderby in Lincolnshire. On the afternoon of 25 February 1945 Harold was a crew-man aboard Lancaster ME490, which took off on a training flight to demonstrate three-engined landings. After shutting off one engine the Lancaster attempted to land, but stalled and crashed, killing six of her crew of seven men. Harold was 29 years old when he was killed in the crash, and is buried at Llandingat (St. Dingat) Churchyard. 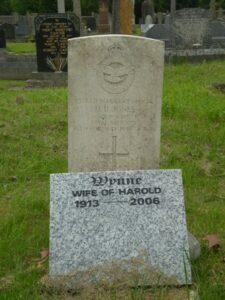 Leslie Thomas, Able Seaman, D/JX212822, Royal Navy. Leslie was born on 30 April 1920, the son of Jonah and Annie Thomas, of Llandovery, and he served at H.M.S. Sultan, which was the Royal Naval Base at Singapore. After the fall of Singapore, many men were captured and fell into Japanese captivity. Leslie died as a POW at Pakan Baroe, Sumatra on 2 March 1945, aged 25, and is buried at Jakarta War Cemetery, Indonesia. 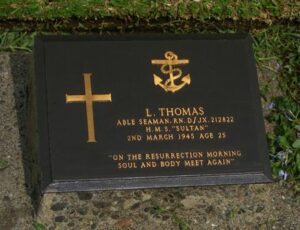 John Ronald Wells, DFM, Pilot Officer, 517494, Royal Air Force. John was born at Llandovery in 1916, the son of Joseph Wells, and Sarah Kennedy. He was educated at Llandovery Grammar School prior to joining the Royal Air Force, becoming a Pilot with 201 Squadron. The squadron was a flying boat unit, equipped with the famous Short Sunderland, and carried out anti submarine flights. Little else is presently known of John, but he appears to have survived the war, dying in 1979, aged 63. He was awarded the Distinguished Flying Medal ‘for gallantry and devotion to duty in execution of air operations’ in the London Gazette of 26 August 1941. His brother Joseph was killed.

Joseph Wells, Aircraftman 1st Class, 617573, Royal Air Force. Joseph was born at Llandovery in 1921, the son of Joseph Wells, and Sarah Kennedy. He was educated at Llandovery Grammar School, before enlisting into the Royal Air Force. Joseph served with 22 Squadron, Royal Air Force, which was an anti-submarine unit, equipped with the Bristol Beaufort. On 16 April 1940 Joseph was flying as a crewman aboard the Bristol Beaufort I, Serial L4465, on a mine-laying mission, when the aircraft suffered engine failure and crashed into the sea. All four of the crew were killed, two being washed ashore and buried. Sadly Joseph and another crew member were never found, and they are commemorated on the Runnymede Memorial, Surrey.

Thomas Idwal Williams. Thomas was possibly born at Llandovery in 1912. He was educated at Llandovery Grammar School, but no man of that name appears to have fallen during World War Two.