During the first few days of war detachments of the Red Cross had mobilised throughout Carmarthenshire, and began looking at arrangements for nursing wounded soldiers. The President of the Carmarthenshire Branch was Margaret Ker Vaughan Pryse-Rice of Llwyn y Brain, Llandovery, who announced offers of help which she had received; Lady Owen Philipps and Mrs. Owen of Coombe had donated £25 each, offered to equip Coombe with twenty four beds and employ a nurse; Lady Dynevor had offered to equip Dynevor Castle with fifteen beds and to pay for a nurse; Miss Yelverton of Whitland had offered to equip Yelverton Abbey with six beds and donated £10. There were numerous other donations of money and the use of homes from various local people. Notable among the offers were the possibility of sixty beds at Carmarthen College and the provision of extra beds at Llandovery and Carmarthen Infirmaries, and throughout the duration of the war, other county houses were to provide care for sick and wounded soldiers.

Around Carmarthenshire further meetings were held by the British Red Cross Society, with the aim of bolstering interest in the institution and to gather funding and volunteers for service to help the allied soldiers and people of Europe who were suffering due to the war. It was also looking to supplement the work of the Royal Army Medical Corps, which was struggling under the sheer volume of wounded, whilst the Red Cross would play a role in helping to trace the whereabouts, or the fate, of the many missing men.

As well as the local efforts of the branch president in running the local Red Cross work, her two surviving daughters, Dorothea and Nest also helped, by working as nurses in Llandovery Hospital, amongst others, during the course of the war. Sadly both of these young women died in 1921, and are commemorated by a fine marble memorial plaque which was presented by the Carmarthenshire branch of the British Red Cross. This memorial was erected inside St. Dingat’s Church. 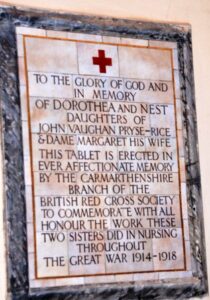 Nesta was born in London in 1896, the daughter of John Carbery Pugh Vaughan Pryse-Rice and Margaret Vaughan Pryse-Rice, of Llwyn y Brain, Llandovery. She had been a Staff Nurse at Llandovery Auxiliary Hospital during the war. Nesta was killed during the tragic Abermule train disaster, which killed seventeen people when two trains collided in Montgomeryshire on 26 January 1921. Nesta was just 25 years old and is buried in St. Dingat’s Churchyard, Llandovery. 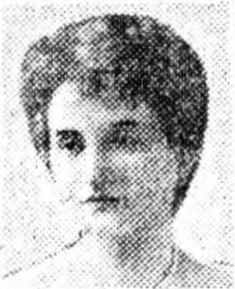 Their mother, Margaret Ker Pryse-Rice herself was born at Alltyrodyn, Rhydowen in 1869, the daughter of James Stewart and Louisa Charlotte Stewart. She married John Carbery Pugh Vaughan Pryse-Rice on 27 September 1887, becoming Lady Pryse-Rice. Her efforts in leading the Carmarthenshire branch of the British Red Cross during the war led to her being created a Dame Commander of the Order of the British Empire in the 1918 New Years Honours List. She died on 1 June 1948 having outlived her husband by eleven years.