Salem Welsh Calvinistic Methodist Chapel is located at New Road, Llandeilo on a site which has been in use since 1788. The chapel was designed by Richard Owens of Liverpool. To the right-hand side of the wood panelled organ is a marble War Memorial tablet, which commemorates five members of the chapel who lost their lives during the Great War. 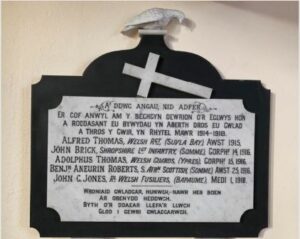 John Caleb Brick, Private, 14519, Kings Shropshire Light Infantry. John was the son of Aaron and Margaret Brick, of Providence Place, Llanwrtyd Wells. He worked as a colliery labourer at Ammanford prior to the war and enlisted at Llandrindod Wells into the 7th Battalion, King’s Shropshire Light Infantry, which was attached to 67 Brigade, 25th Division. On 28 September 1915, the Battalion landed at Boulogne and two weeks later moved to 8 Brigade, 3rd Division. The Division was at Ypres at the beginning of 1916, and the 7th KSLI saw their first major action at the Bluff and the St. Eloi craters. They moved to the Somme in June, 1916 and fought there throughout the great offensive, where John was killed in Action during the Battle of Bazentin Ridge on 14 July 1916, aged 32. He is commemorated on the Thiepval Memorial, France. 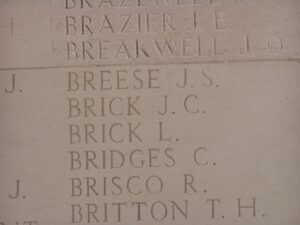 David Charles Jones, Private, S/1410, Rifle Brigade. David was born in Llandeilo, the son of Thomas and Elizabeth Jones. The family later moved to 56, Byng Terrace, Brynhyfryd, Swansea, and David enlisted there on 3 September 1914 into the army. He landed in France on 21 July 1915 with the 12th Battalion, Rifle Brigade, which was attached to 60 Brigade, 20th (Light) Division. The Division had completed concentrating in France by 26 July 1915, and took part in the Battle of Loos, attacking towards Fromelles on 25 September 1915. They moved to Ypres soon after, which is where David was Killed in Action on 12 February 1916, aged 27. He is commemorated on the Ypres (Menin Gate) Memorial, Belgium. 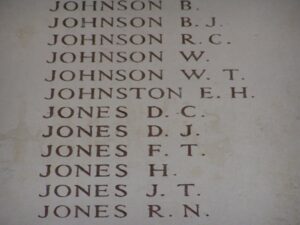 Benjamin Aneurin Roberts, Private, 7002, South African Infantry. Benjamin was the son of Edward Aneurin and Edith Jane Roberts, of Cambrian House, Llandeilo. He had migrated to South Africa prior to the war with his aunt and uncle, Charles Octavius Oxenham and Marian Oxenham in 1913, and he enlisted at Transvaal into the 2nd Transvaal Scottish on 16 October 1914. Released from service on 7 August, he enlisted into 4th S.A.I. Battalion on 8 August 1915. The Battalion was part of the South African Brigade, which moved to France in April 1916 and was attached to the 9th (Scottish) Division. They were stationed at the time near Vimy, north of Arras, which is where Benjamin was sadly Killed in Action on 24 August 1916, aged 18. He is buried in Zouave Valley Cemetery, Souchez. His cousin, Wyndham Oxenham, also fell. 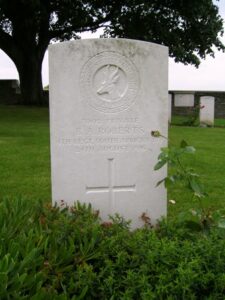 Adolphus Thomas, Private, 2591, Welsh Guards. Adolphus was the son of Lewis and Mary Thomas, of White Lion Hotel, Llandeilo. He was the local postman at Llandeilo prior to the war, and enlisted at Ammanford into the 1st Battalion, Welsh Guards on 9 December 1915. The Welsh Guards were raised after the Royal Warrant of 26 February 1915 After being formed, they became part of the 3rd Guards Brigade, Guards Division, which was formed in France in August, 1915. Their first taste of battle was at Loos, and they then moved to Ypres to rebuild their strength after the fierce fighting there. The Guards remained here until July 1916, when the Division moved to the Somme, and fought at the Battles of Flers-Courcelette and Morval. The Guards followed the German withdrawal to the Hindenburg Line in March 1917. They then moved to Ypres, prior to taking part in the Battle of Third Ypres. Adolphus was wounded by multiple shrapnel wounds while the Welsh Guards were in the line at Ypres. He died of wounds that same day, on 15 July 1917, aged 26. Adolphus is buried at Canada Farm Cemetery, Belgium. His brother was also serving with the colours in Salonika. 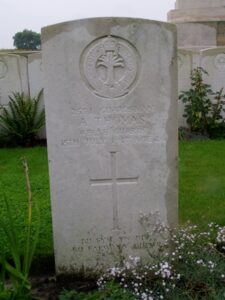 Alfred Thomas, Private, 4226, Welsh Regiment. Alfred was the husband of Mary Anne Thomas, of Mile End, Llandeilo. He enlisted at Llandeilo into the 1/4th Battalion, Welsh Regiment. The Battalion formed part of 159 Brigade, 53rd (Welsh) Division, and sailed for Egypt in July 1915, preparatory for landing at Suvla, Gallipoli on 8 August 1915. Alfred was killed in action soon after the landings, during the divisions first action, during the Attack on Scimitar Hill, on 10 August 1915. He has no known grave and is commemorated on the Helles Memorial, Gallipoli.