Llanboidy is a small village, situated on the western edge of Carmarthenshire. The village dates back to the Iron Age where the site of a fort can be seen near the village centre. The Village Church is dedicated to St. Brynach, and contains the War Memorial to the men of the village who fell during both World Wars. There are also several memorials inside the Church which commemorate some of these men. 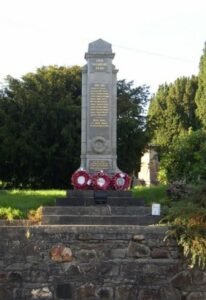 John Caisley, Private, 266732, Gloucestershire Regiment. John was born in Bristol in 1893. By 1911 both John and his younger brother William had moved to Carmarthenshire, William finding work at Ornant Farm, Meidrim, and John found work for John and Phoebe Williams, at Ddol Farm, Llanboidy. John enlisted in Bristol into the 2/6th Battalion, Gloucestershire Regiment, who had been formed at St. Michael’s Hill, Bristol in September 1914 for Home Service as part of 2nd South Midland Division. During August 1915 the battalion became part of 183 Brigade, 61st Division, and landed in France in May 1916. It’s first taste of action was in the Battle of Fromelles, which was a diversionary attack in Flanders which was meant to draw German attention away from the main offensive in the Somme. In March 1917 the Division were on the Somme when the Germans pulled back to the Hindenburg Line, and captured the towns of Chaulnes and Bapaume, finally stopping in the area facing the Hindenburg Line, where they remained until being sent north again to Flanders to take part in the Battle of Langemarck in August 1917. John was killed in action on 3 May 1917, aged 22, while the Battalion was opposing the German trenches around the St. Quentin sector, and is buried in Chappelle British Cemetery, Holnon, France. 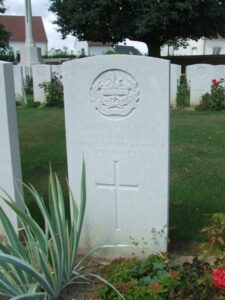 John Davies, Corporal, 12295, South Wales Borderers. John was the son of Benjamin and Jane Davies, of Manchester Row, Llanboidy. He enlisted at Brecon into the 4th Battalion, South Wales Borderers, which formed part of 40 Brigade, 13th (Western) Division. The Division embarked at Avonmouth on 29 June 1915, and sailed to the Mediterranean, landing on Gallipoli, at Cape Helles, on 15 July 1915. John was killed in action just a few weeks after landing at Helles, on 11 August 1915, aged 16, during the Battle of Sari Bair. He is commemorated on the Helles Memorial, Gallipoli. His parents later moved to Spring Gardens, Whitland. 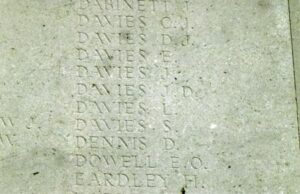 Willie Davies, Fourth Engineer Officer, Mercantile Marine. Willie was the Son of Henry and Sarah Davies, of Cwmfelin Mynach. He served as an engineer with the Merchant Navy, aboard the SS Guildhall. Guildhall was built by Tyne Iron Shipbuilding Co. Ltd., Newcastle in 1898, and owned Letricheux Line, Ltd., Swansea. On 25 June 1917, Guildhall was on a voyage from Valencia to Cardiff with a cargo of ore and oranges, when she was sunk by the German submarine U-62, with the loss of twelve lives. Willie was among the men lost. He was 21 years old, and is commemorated on the Tower Hill Memorial, London.

Arthur Edwards, Gunner, 100984, Royal Garrison Artillery. Arthur was the son of John and Martha Jane Edwards, of East Williamston, Tenby. By 1911 Arthur was residing at 5, Piccadily Terrace, Llanboidy, and worked as a postman. On 27 February 1913 he married Ellen Ann Griffiths, of Chapel House, Cilgerran, and the couple set up home at Millbrook House, Llanboidy, where their two children were born. Arthur enlisted at Pembroke Dock on 23 June 1916 into the Royal Garrison Artillery. He was posted to the 188th Siege Battery, Royal Garrison Artillery, and landed in France with the battery on 30 October 1916. Arthur remained with the battery in France for the duration of the war, but sadly died of influenza at 30 Casualty Clearing Station on 17 November 1918. He was 33 years old, and is buried at Cambrai East Military Cemetery, France. 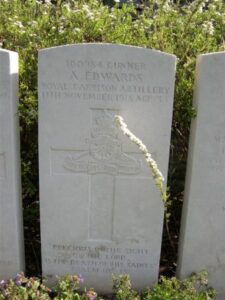 James Stanley Phillips, Private, 39605, South Wales Borderers. James was born in Llanboidy in 1897, the son of David and Anne Phillips. The family later moved to Parcnwc, Llansteffan. James’s mother Anne was the daughter of Mr and Mrs Thomas, Castell-Toch, Laugharne. Early in 1917, James was drafted into the army, where he became a Private in the 2nd Battalion, South Wales Borderers, which formed part of 87 Brigade, 29th Division. The battalion had fought in China, before taking part in the Gallipoli landings with the 29th Division. They at Marseilles on 29 March 1916. The Division fought through the Battle of the Somme in 1916, then through the Battles of the Scarpe, near Arras, through the beginning of 1917. On 7 June 1917, the Flanders Offensive, a brainchild of Sir Douglas Haig, was begun around Ypres. The following battles were to become known as ‘Third Ypres’ or ‘Passchendaele’. On 16 August 1917, the Battle of Langemarck began. This area, just North of Ypres, had become a hellhole. The continuous bombardment of the German Front Lines had turned the battlefields around Ypres into a quagmire of foul, sticky mud, full of the debris of three years of non-stop fighting. James was killed in action on 16 August 1917. He was 20 years old, and, is commemorated on the Tyne Cot Memorial, Belgium. At the very time that James lost his life, his mother also had the agony of her elder brother in an Army Hospital in Birmingham having his leg amputated after a terrible wound suffered in France. 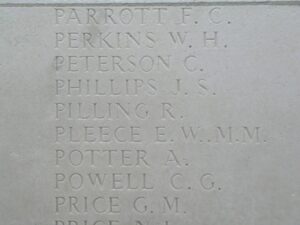 Arthur Ernest Pigrum, Drummer, 2896, Gloucestershire Regiment. Arthur was born in Bristol, the son of Henry Frederick and Elizabeth Bloom Pigrum. The family later moved to 37, Trafalgar Street, Pontymister, while Arthur came to Llanboidy in 1912 to work at Ddol Farm. He returned to Bristol to enlist in the 1/4th Battalion, Gloucestershire Regiment, which formed part of 144 Brigade, 48th (South Midland) Division. The Division landed at Boulogne on 30 March 1915, and saw its first major action on the Somme, at the Battle of Albert in July, 1916. In the meantime, after arriving in France in March 1915, the Division were stationed around the northern Somme sector, where Arthur was killed in action on 23 March 1916, aged 18. He is buried in Sucrerie Cemetery, Colincamps, France. 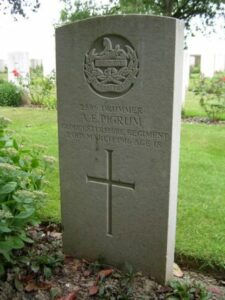 Rowland Reynolds, Private, 30885, East Lancashire Regiment. Rowland was the son of Philip and Frances Reynolds, of Tymorau, Llanboidy. He enlisted at Carmarthen into the Royal Welsh Fusiliers, but was subsequently transferred into the 2/5th Battalion, East Lancashire Regiment, which Formed part of 198 Brigade, 66th Division. The Division landed at Le Havre on 2 March 1917, and moved to the Flanders coast, until being moved to Ypres where they fought at the Battle of Poelcappelle. They moved south to St. Quentin during the winter of 1917/1918, and were hit there by the German Spring Offensive, seeing significant action, and suffering badly, not being used again in its entire form until the Battle of Cambrai, after the German offensive had burnt itself out. The Division pushed north-east from Cambrai, toward the Selle and the Sambre, until the Armistice was declared on 11 November 1918. Rowland sadly died just days later, on 14 November 1918, aged just 23. He is buried in Wavre Communal Cemetery, France. Many thanks to Pierre Vandervelden for supplying the photograph. 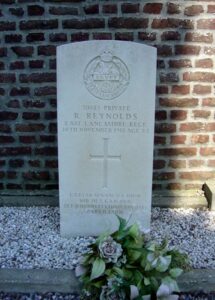 John Richards, Private, 20251, Royal Welsh Fusiliers. John was born in Llanboidy in 1882, and was raised by his aunt, Sarah Richards, at Colden. He married in 1904, and set up home at 2, East Gate, Llanboidy, with his wife Martha Anne Richards. John served with the Royal Welsh Fusiliers. Little is yet known of him, but he possibly died in 1920 as a result of his service, and is not commemorated by the CWGC.

George Powell Roch, Captain, Pembroke Yeomanry. George was born in Llanboidy, the son of William Francis Roch, and Emily Catherine Roch, the daughter of Walter Rice Howell Powell, M.P., of Maesgwynne, Whitland. George was the Husband of Muriel Roch, of 33, Draycott Place, London, and was J.P. and D.L. for the County of Carmarthenshire. George had been commissioned into the Pembroke Yeomanry, but was attached to the 1st Battalion, Kings Shropshire Light Infantry, part of 16 Brigade, 6th Division. The Division had arrived in France in 1914 in time to reinforce the B.E.F. on the Aisne, where the Germans were held, and then moved to Flanders, where they fought at Hooge. The Division fought on the Somme, at Flers, Morval, and Le Transloy, before fighting at Hill 70 near Loos, and at the Battle of Cambrai in late 1917. They were at St. Quentin when the German Spring Offensive was launched, then moved back to French Flanders, fighting at the Lys, and the Second Battle of Kemmel, and this is where George was Killed in Action on 21 May 1918, aged 43. He is buried at Nine Elms British Cemetery, Belgium. 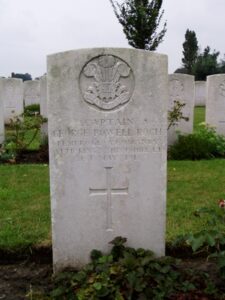 William Protheroe Roch, Captain, Welsh Horse Yeomanry. William was born at Butler Hill, Pembrokeshire, the son of William Francis Roch, and Emily Catherine Roch, the daughter of Walter Rice Howell Powell, M.P., of Maesgwynne, Whitland. William had volunteered to serve in the newly formed Welsh Horse Yeomanry, which were raised in August 1914. The Welsh Horse were attached to the 1st Mounted Division, and were sent to Gallipoli, landing on ANZAC Beach on 8 October 1915. Here they were attached to the 54th (East Anglian) Division, and used as Pioneers, mining at Hill 60. After evacuating from Gallipoli in December that year, they moved to Egypt, and merged there with the Montgomeryshire Yeomanry to form the 25th Battalion, Royal Welsh Fusiliers, in 231 Brigade, 74th Division. They fought in Palestine, capturing both Gaza and Jerusalem, before fighting in the Battle of Jaffa, and taking part in operations against the Turks in the Jordan Valley. William was Killed in Action, aged 35, on 11 March 1918, in the Jordan Valley. He is buried in Jerusalem War Cemetery, Israel. 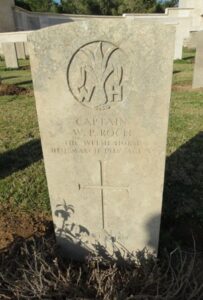 David Charles Saer, Lance Corporal, 320122, Welsh Regiment. David was born in Llanboidy, the son of Charles and Phoebe Saer. The family later moved to Capelmair Villa, St. Clears. ‘Dai’ enlisted into the Pembroke Yeomanry at Whitland, with the number 2160. The Pembroke Yeomanry had formed in Tenby for Home Defence, as part of the South Wales Mounted Brigade. They arrived in Egypt in March 1916, and on 2 February 1917 were disbanded, joining with the Glamorgan Yeomanry to form the 24th Battalion, Welsh Regiment, as part of 231 Brigade, 74th (Yeomanry) Division. The Division first saw action during the Second Battle of Gaza, where David was unfortunately killed in Action, on 6 November 1917, aged 34. He is buried in Beersheba War Cemetery. Dai is not commemorated at Llanboidy, but at nearby St. Clears. 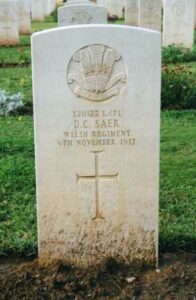 Stanley Trotman, Stoker, K/53284, Royal Navy. Stanley was born in Bristol on 12 August 1900, the son of Annie Trotman. He looks to have been brought up in care at The Cottage Homes, as his mother resided at 91 Ward, Stapleton Institution, Fishponds, Bristol. Stanley worked as a Postman and resided at Llanboidy prior to enlisting into the Royal Navy on 16 August 1918. He served as a Stoker at H.M.S. Vivid, a Training Establishment at Devonport Dockyard, Plymouth. Stanley died of pneumonia at Plymouth on 9 September 1918, aged 18, and is buried at Ford Park Cemetery in Plymouth.

Denzil Jonah Thomas, Leading Aircraftman, 651354, Royal Air Force Volunteer Reserve. Denzil served in 30 Squadron, R.A.F.V.R., which had originally been formed in Ismailia in 1915. Prior to the outbreak of WW2, the Squadron were in Iraq, but moved to Egypt by 1938, flying Blenheims. They flew bomber escort duties in North Africa, and moved to Greece when invasion was imminent, but when Greece fell were hurriedly evacuated to Crete, being stationed at Maleme Airfield. The Battle of Crete began on 20 May 1941, with Junkers transport planes dropping scores of elite German Paratroopers near the airfield. Denzil was killed in the Battle of Crete on 20 May 1941, and is remembered on the Alamein Memorial, Egypt. Denzil is also commemorated at Whitland.