The Morlais tinplate works was situated in Llangennech, and was operated by the Morlais Tinplate Company Limited. At some time after 1907 it took up a share in the Llanelly Steel Company (1907) Limited. A large number of men from the works served in the Great War, yet fortunately only one man fell. The works commissioned a War Memorial at the end of hostilities to commemorate its workers who served, and the one man who fell. When the Morlais plant was dismantled in 1946, the memorial went into storage, and it is now held at the Kidwelly Industrial Museum. The photograph of the memorial was kindly supplied by Les Nixon. 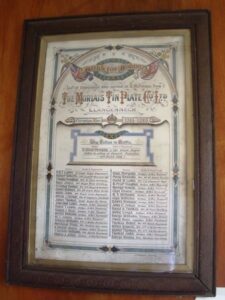 List of Employees who served in H.M. Forces from

The Fallen in Battle

David Elias Morgans, Private, 72957, Royal Welsh Fusiliers. David was the son of David and Mary Morgans, of Garrde, Llwynhendy. He worked as a Behinder at the Morlais Tinplate Works prior to the war, and enlisted at Llanelli into the army. David was posted to the 25th Battalion, Royal Welsh Fusiliers. The battalion formed at Helmia, Egypt on 4 March 1917, from the dismounted Montgomery and Welsh Horse Yeomanry, and was attached to 231 Brigade, 74th Division. The Division had formed in Egypt in January 1917 and had fought through the Palestinian Campaign, at the Battles of Gaza and the Battle and capture of Jerusalem. Through the winter of 1917/18 the division took part in operations in the Jordan Valley, and it was here that David was fatally wounded. He died of his wounds on 10 March 1918, aged 27, and is buried at Jerusalem War Cemetery, Israel. (The memorial incorrectly shows him as being in the Welsh Regiment). 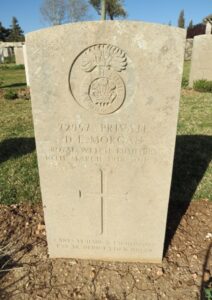