Hebron is a hamlet which lies about six miles north of Whitland, in between the villages of Glandwr and Llanglydwen, in Carmarthenshire. Situated in a prominent position on the crossroads in Hebron is Hebron Independent Chapel, which was erected in 1804. I do not know if there is a war memorial within the Chapel, but six local men were killed during World War One and another in World War Two, so this page has been created to commemorate these men.

Henry Rees Davies, Private, 63421, Machine Gun Corps. Henry was the son of Simon and Anne Davies, of Fron Farm, Hebron. He married Blodwen Caple in 1913 and the couple resided at 19, Railway Terrace, Porthcawl. He enlisted at Tonypandy into the Welsh Regiment, Army Number 35881, but transferred upon the creation of the Machine Gun Corps into the 9th Battalion, Machine Gun Corps, part of 9th (Scottish) Division. Henry fought with the Division at the Battle of the Somme, capturing the village of Longueval. They then fought at the Battle of Arras, and at Third Ypres, and the Action of Welsh Ridge near Cambrai. In Spring 1918 the German Offensive caught them in the St. Quentin area, before they were transferred to Flanders, meeting the German offensive at Messines and Bailleul. Henry was wounded during the Allied Advance in Flanders in October 1918, and died of wounds on 14 October 1918, aged 37. He is buried at Duhallow A.D.S. Cemetery, Belgium. 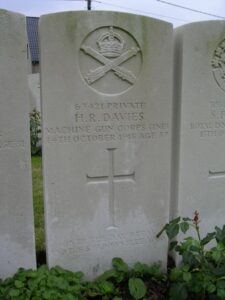 Peter William James, Driver, 42313, Royal Field Artillery. Peter was the son of William and Phoebe James, of Llanllyn, Hebron. He enlisted at Tonypandy into the 147 Brigade Ammunition Column, Royal Field Artillery, which was attached to the 29th Division. The Division initially sailed for Gallipoli, landing on 25 April 1915 with the first wave. They remained on the peninsula until evacuating on 2 January 1916, but in the meantime, Peter was wounded, and shipped to the Military Hospital at Port Said. Peter Died of Wounds on 2 July 1915, aged 28, and is buried at Port Said War Memorial Cemetery, Egypt.

Haydn Gwion Morris, Sapper, 155380, Royal Engineers. Haydn was the son of William and Sarah Morris, of Bridge Hill, Hebron. He enlisted at Carmarthen into the Royal Engineers and was posted to their ‘P’ Special Company, a Chemical Warfare Company. The Germans had introduced the use of chemical warfare at Ypres, attacking French Colonial positions near Langemarck on 22 April 1915. Outraged, and after several more similar attacks, the British formed their own Gas Companies, and developed gases and the means of delivering them. The Special Companies were developed to handle and fire the 4-inch Stokes Mortar Gas Shells, which were normally used prior to an infantry attack. Haydn was Killed in Action during the Third Battle of the Scarpe, on 6 May 1917, aged 23, and is buried at Beaulencourt British Cemetery, Ligny-Thilloy, France. 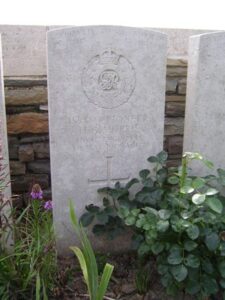 Benjamin Samson, Lance Corporal, 4118, Australian Imperial Force. Benjamin was the son of David Samson, of Trefedw, Hebron. Benjamin and his brother David (See below) emigrated to Australia, where they found work as miners at Collie. Ben attested on 11 May 1916, into the Australian Imperial Force at Belmont, Western Australia. On 5 September 1916 Ben was assigned to the 10th Reinforcements to the 32nd Battalion, and embarked at Fremantle aboard HMAT Port Melbourne, bound for Britain on 28 October that year. On 1 March 1917 Ben arrived at Étaples from England, and joined his Battalion on 6 March. He was promoted to Lance Corporal on 9 April, and the Battalion, as part of 8 Brigade, 2nd Australian Division, moved to Flanders, where they fought at the Battles of Third Ypres. It was during the Battle of Polygon Wood that Ben was Killed in Action on 30 September 1917, aged 32. A German aeroplane had come down near the Australian lines, and German Artillery were trying to break it up with shellfire, when a shell landed in a dugout occupied by Ben. He was buried at the spot by some of his ‘cobbers’, and his body was later reinterred at Tyne Cot Military Cemetery, Belgium. 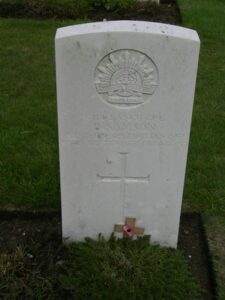 David Samson, Private, 3548, Australian Imperial Force. David was the son of David Samson, of Trefedw, Hebron, and the brother of Benjamin (see above). He enlisted at Blackboy, Western Australia, into the Australian Imperial Force on 23 July 1915. David embarked as part of the 11th Reinforcements of the 16th Battalion at Adelaide on 27 October 1915 aboard HMAT Benalla and arrived in Egypt by February 1916. He had several spells of sickness in Egypt, requiring Hospital treatment, but was fit enough by June 1916 to embark aboard the HS Arngow and travel to England. He embarked to France in September 1916 after a spell at Larkhill Camp and joined the 16th Battalion in the field on 1 October 1916, missing the fighting at Pozieres, and spent the winter of 1916/1917 entrenched near Flers on the Somme. David was Killed in Action near Flers on 11 April 1917, aged 24. His body was lost on the battlefield, and so he is remembered on the Villers Bretonneux Memorial, France. 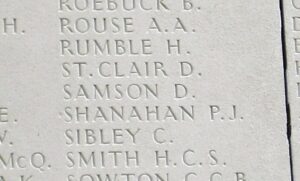 Richard Gomer Tudor, Sergeant, 18258, South Wales Borderers. Richard was the son of Samuel and Martha Tudor, of Hebron. He enlisted at Newport into the 5th Battalion, South Wales Borderers, part of 58 Brigade, 19th (Western) Division, which landed at Le Havre on 16 July 1915. The division saw its first major action during an abortive diversionary assault on the opening day of the Battle of Loos on 25 September 1915. After wintering in the Givenchy sector the division moved south and took part in the opening assault of the Battle of the Somme, where it took the village of La Boisselle. The division then fought at Pozieres and during the later Battle of the Ancre. Richard was wounded during the Battle of the Ancre and taken prisoner by the Germans. He died of his wounds on 18 November 1916, aged 23 and is buried in Contay British Cemetery, France. 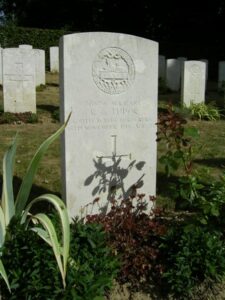 Thomas David Thomas, Gunner, 1605265, Royal Artillery. Thomas was the son of Thomas and Catherine Thomas, of Hebron, Carmarthenshire. He was educated at Whitland Grammar School, and when war broke out enlisted into the Royal Artillery. Thomas served in the 3rd Heavy Anti Aircraft Regiment, Royal Artillery, which was based in the Far East. Thomas had been captured by the Japanese and was sent to work on the Burma-Siam Railway. Sadly, Thomas died in captivity in Burma, on 6 December 1943, aged 30. Thomas is buried at Thanbyuzayat War Cemetery, Myanmar. 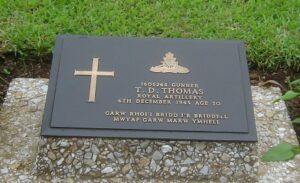 Evan Evans, Private, 48245, Welsh Regiment. Evan was from Rhos Farm, Hebron. He served with the 8th Battalion, Welsh Regiment, and was entitled to the British War Medal, as he did not reach a theatre of war until after the Armistice.

David John Howells, Private, 200218, Welsh Regiment. David was from Lan, Hebron, the son of Margaret Howells (nee John). He worked as a Clothier at Narberth prior to the war and enlisted there into the 4th Battalion, Welsh Regiment. The battalion was a Territorial unit attached to 158 Brigade, 53rd (Welsh) Division and embarked for Gallipoli in July 1915, landing on the Peninsula on 8 August. It fought an arduous campaign in Gallipoli before being evacuated to Egypt and then took part in the campaigns in Egypt and Palestine. David survived the war and was demobilised on 6 September 1919.

John Howard James, Private, 50436, Royal Army Medical Corps. John was born on 12 July 1879, the son of Edward and Eliza James, of Derlwyn, Glandwr, Hebron. He was a Congregational Minister at Port Talbot and married Sarah Mathews at Neath on 25 December 1915. John must have been a patriotic man, as he enlisted into the Welsh Regiment at Cardiff on 14 May 1916. He trained with the 22nd Battalion, Welsh Regiment before being transferred to the Royal Army Medical Corps on 31 December 1916 and was posted to France. The war took its toll on John’s health and he was discharged as medically unfit on 8 March 1919. He later became a Congregational Minister at Carmarthen and died at Neyland on 30 March 1962, aged 82.

Robert Gladstone James, Bombardier, 731138, Royal Field Artillery. Robert was born on 29 December 1885, the son of Edward and Eliza James, of Derlwyn, Glandwr, Hebron. He was educated at the University of London prior to enlisting into the Royal Field Artillery and served in France with the 392nd Battery, Royal Field Artillery, ending the war with the rank of Battery Quartermaster Sergeant. He returned home to Hebron to farm after the war, living with his wife Catherine at Derlwyn. Robert died on 4 September 1964 aged 78.

Thomas John Owen, Private, 364394, Royal Army Medical Corps. Thomas was born on 1 September 1893, the son of Owen Rhys Owen, a Minister, and Margaret Owen, of Islwyn, Hebron. He served during the war with the Royal Army Medical Corps. Thomas became a Clergyman at Abergavenny after returning from the war. He married Vera Lillian Robinson in 1939 and died in 1988. Pictured below is Thomas and his mother, Margaret. 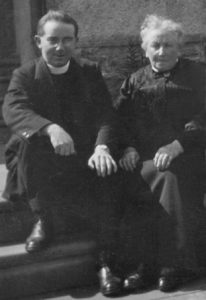 Ezer Phillips, Private, Pembroke Yeomanry. Ezer was the son of Mary Phillips, of 1, Water Street, Hebron. He worked as a plasterer prior to enlisting into the Pembroke Yeomanry. He was posted to France with the Machine Gun Corps and was wounded before being sent home for treatment at York Military Hospital. He spent the rest of the war serving with the Labour Corps and returned to Hebron after the Armistice. 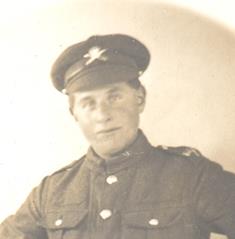 David Garrick Protheroe, Major, Pembroke Yeomanry. David was born in Woolwich on 21 September 1868, the son of Edward Schaw Protheroe and Ellen Augusta Celina Protheroe. By 1891 the family had returned to Ellen’s native Hebron. David was commissioned into the 4th Brigade, Welsh Division, Militia on 22 September 1888. He was promoted Temporary Major in the Pembroke Yeomanry on 9 November 1914. On 26 July 1917 he was promoted Major, with precedence from 9 November 1914. He seems to have remained on home service throughout the war. He died in Carmarthenshire in 1954, aged 86. His brother, Godfrey Evan Schaw Protheroe also served with the Pembroke Yeomanry.

Godfrey Evan Schaw Protheroe, Major, Pembroke Yeomanry. Godfrey was born at Harwich in 1872, the son of Edward Schaw Protheroe and Ellen Augusta Cecilia Protheroe (nee Beynon). During 1906 he inherited Trewern Mansion at Llanddewi Velfrey, and the following year was appointed High Sheriff of Carmarthenshire, assuming the name of Protheroe-Beynon. He was serving as Captain with the Pembroke Yeomanry during 1908, when the Territorial Force was created, and was promoted to Temporary Major on 9 November 1914. Godfrey must have remained on home service during the war, as no medal card can be found for him. He died at Trewern in 1958, aged 86. His brother David Garrick Protheroe also served with the Pembroke Yeomanry.

Daniel John Reynolds, Private, 247895, Royal Field Artillery. Daniel was born on 20 September 1892, the son of Benjamin and Hannah Reynolds, of Brwynnant, Hebron. He served in France with the Royal Field Artillery throughout the war and returned to Hebron after the Armistice. He died at Brynywawr, Tegryn on 4 April 1974, aged 81.