Gwynfe is a small village in the Brecon Beacons National Park, situated to the west of the A4069 road about halfway between Llangadog and Brynamman. All Saints Church, which is located in the village, was erected in about 1898 to replace a smaller mediaeval chapel and contains a single war memorial plaque, dedicated to the memory of one local man, John Gwynfor Jones, of Pantybedw, who fell during World War Two. 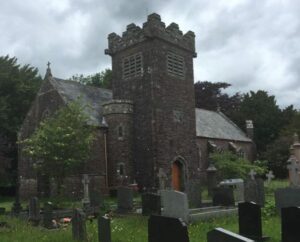 John Gwynfor Jones, Private, 4036611, Parachute Regiment. John was the son of John and Sarah Jones, of Pantybedw, Gwynfe. He enlisted into the King’s Shropshire Light Infantry and was part of a number of men posted to the 7th Battalion, Parachute Regiment which was part of the 3rd Parachute Brigade, 6th Airborne Division, on 3 July 1944, to make up losses suffered following the D-Day landings. John fought with the battalion throughout the remainder of the Normandy campaign and in September returned to Britain where he qualified as a parachutist, and returned to action during the Ardennes campaign. On 24 March 1945 John took part in the final mass allied parachute and glider assault of World War II, Operation Varsity, and by 7 April his battalion reached Petershagen, between Osnabrück and Hanover, before advancing towards Neustadt by motor transport. John was among a number of men killed during heavy fighting around Wunstorf Airport at some time during the night. He was 28 years old and is buried in Becklingen War Cemetery. Neustadt and its river crossing over the Rhine were successfully captured during the following days, enabling the Allies to advance into the heartland of Germany. 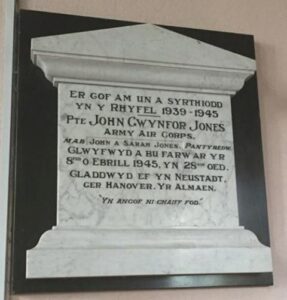