Gwernogle is a small village which lies about ten miles north-east of Carmarthen, on the edge of the Brechfa Forest. The local Capel Gwernogle contains a marble war memorial plaque to commemorate the four men of the village who fell during the Great War, and a separate plaque for another man who fell during World War Two. The photographs of the two memorials have been kindly supplied by Yvonne Thomas. 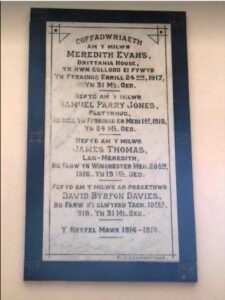 David Byrfon Davies, Private, 94368, Royal Welsh Fusiliers. David was born at Gwernogle, and was the nephew of David Davies, of Rhiwan Farm, Pontynyswen, Nantgaredig. He worked as a Collier at Aberdare prior to the war and enlisted there on 12 December 1915 into the Royal Welsh Fusiliers, with the army number 60768. He remained on the reserve until being posted to France on 22 October 1918, firstly joining the Monmouthshire Regiment before being attached to the 14th Battalion, Royal Welsh Fusiliers. The battalion had been at Bouzincourt, north of Albert, from early in April until 21 August attached to 113 Brigade, 38th (Welsh) Division. On 21 August 1918 the division crossed the Ancre Valley, and began driving the Germans back across the old Somme battlefields, towards and beyond the much vaunted Hindenburg Line. David was wounded on 6 November 1918 during the forcing of the Forest of Mormal, and was sent to the Hospital at Abbeville, where he died of his wounds on 10 November 1918, aged 31. David is buried in Abbeville Communal Cemetery Extension, France. 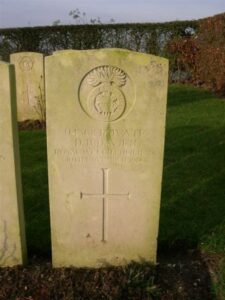 Meredith Evans, Private, 48589, Welsh Regiment. Meredith was born at Gwernogle on 29 July 1885, the son of David Edgar Evans, of the Post Office, Gwernogle. He married Anne Thomas, daughter of Salach Farm, Gwernogle, before enlisting at Swansea on 17 April 1915 into the 14th Battalon, Welsh Regiment, with the service number 29244. Meredith was posted to France on 6 December 1915, and was wounded, returning home for treatment. After recovering from his wounds, he joined the 17th Battalion, Welsh Regiment on 26 February 1917, which was in France attached to 119 Brigade, 40th (Bantam) Division. The Division then followed the German retreat to Hindenburg Line, and it was during this period that Meredith was killed during an assault on the Hindenburg Line defences from Fifteen Ravine on 24 April 1917. He was 33 years old, and is buried in Fifteen-Ravine British Cemetery, Villers-Plouich, France. 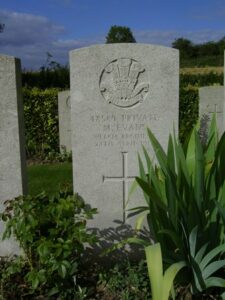 Samuel Parry Jones, Private, 92529, London Regiment. Samuel was the son of David and Mary Jones, of Pantrhug, Gwernogle. He enlisted at Neath into the Army Service Corps, but was later posted to the 1/3rd Battalion, Royal Fusiliers, which was attached to 173 Brigade, 58th (2/1st London) Division. The Division moved to France from January 1917, and followed the German Retreat to the Hindenburg Line in March. They then took part in the Flanking Operations Round Bullecourt. Later that year they moved north to Ypres, and fought at the Battle of the Menin Road, Polygon Wood and Passchendaele. In March 1918 the Division were positioned around St. Quentin, and faced the German Spring Offensive of 21 March here, fighting at the Battle of St Quentin, and fought several engagements towards Villers-Bretonneux. In August 1918 the Allies pressed an attack towards Villers-Brettoneux, as part of the Battle of Amiens, and later in the month the Division took part in the great offensive which turned the war. Samuel was killed during the advance on 1 September 1918. He was 24 years old, and is commemorated on the Vis-En-Artois Memorial, France. 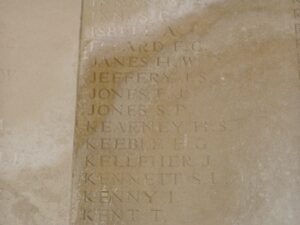 James Thomas, Gunner, 218777, Royal Garrison Artillery. James was the son of Henry Thomas, of Lanmeredith, Brechfa. He enlisted at Carmarthen into the Royal Garrison Artillery, and after training was posted to No. 1 Depot, RGA. James became ill, and died of pneumonia in hospital at Winchester on 28 June 1916. He was 19 years old, and is buried in Gwernogle Congregational Burial Ground. 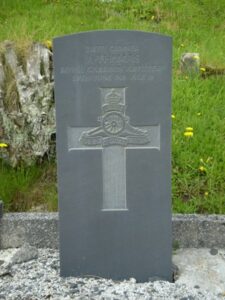 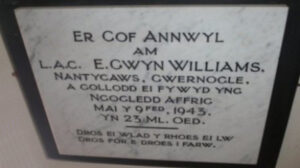 Evan Gwyn Williams, Leading Aircraftman, 1339044, Royal Air Force Volunteer Reserve. Evan was the son of David and Amy Williams, of Nantycaws, Gwernogle. He served with the RAFVR in North Africa, which is where he was killed in action on 9 May 1943 during the final stages of the war in the Western Desert, when the Afrika Korps had been cornered in Tunisia. Evan was 24 years old, and is buried in La Reunion War Cemetery, Algeria.