Gwendraeth Grammar School was a predominately Welsh language speaking school that opened in Hebron Chapel in Drefach in 1925 and moved to the new building two years later. In 1983 under new education changes became the Gwendraeth Valley Comprehensive School (Predominately English Language) and a new School was built in Cefneithin known as Ysgol Gyfun Maes-yr-Yrfa (Predominately Welsh Language). In 2013 the School was renamed Ysgol Gyfun  Maes Y Gwendraeth and the old Gwendraeth School (Drefach) was officially closed in 2013. Pupils from the old Gwendraeth Grammar School who fell during the Second World War were commemorated on a bronze plaque which was located in the school hall, this has recently been removed for safekeeping and is to be rededicated at St. Lleians Church Gorslas. Many thanks to Terry Davies MBE for sending in the photograph of the memorial. 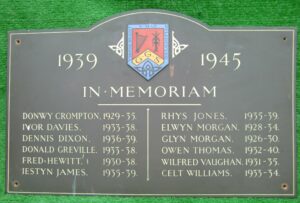 Thomas Donwy Crompton, Sergeant/Pilot, 524980, Royal Air Force. Thomas was the son of Oliver and Sarah Morgan-Crompton of Pontyberem and the husband of Eileen Margaret Crompton, of Derby. Thomas served as a Pilot with the RAF in the Far East, and was stationed at Java, at RAF Indonesia. On 28 February 1942 the Island of Java was attacked by two Japanese forces, which had split to launch a simultaneous attack from both the east and west sides of the Island. The Senior Allied Officers surrendered Java to the Japanese on 12 March 1942. Thomas had been killed during the Battle of Java, on 6 March 1942. He was 25 years old, and is buried at Jakarta War Cemetery. He is also commemorated on the Pontyberem War Memorial. 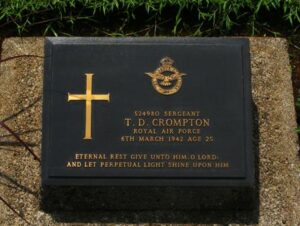 William Dennis Dixon, Sergeant (Air Gunner), 1835971, Royal Air Force Volunteer Reserve. William was the son of William and Annie Dixon, of Carway, Carmarthenshire. He served as an air gunner with 50 Squadron, Royal Air Force, which by 1943 had been equipped with the Avro Lancaster III, and was based at RAF Skellingthorpe. On 3 May 1944 William took off from Skellingthorpe aboard Lancaster LM480 as part of a detachment from 50 Squadron which had been sent to bomb a German military camp at Mailly-le Camp. The Lancaster was one of four lost during the raid, when it was shot down soon after clearing the target area and crashed near the village of St. Mesmin. Two crewmen escaped but William was among seven men killed in the crash. He was 20 years old and was buried alongside his fellow crew-members in St. Mesmin New Communal Cemetery, France. One of the survivors was captured and interred at Buchenwald, while the second survivor came into contact with a Resistance group and was killed when their camp was attacked by a German patrol on 24 June 1944.

Donald Glyndwr Greville, Flying Officer (Pilot), 143449, Royal Air Force Volunteer Reserve. Donald was the son of William and Lily Greville, of Drefach. He enlisted into the Royal Air Force Volunteer Reserve and was trained as a pilot. Donald was attached to No. 63 Operational Training Unit, which was based at RAF Chedworth, and was training on the Bristol Beaufighter II. On 1 January 1944 he took off from Chedworth flying Beaufighter R2304 to carry out a training flight and had completed its operations and began returning to base when an engine exploded and caught fire. Losing height, Donald and his observer baled out of the stricken aircraft, but Donald’s parachute failed to open and he was killed. The remains of the 22-year-old were brought back to west Wales and he was buried in Drefach (Capel Seion) Congregational Chapelyard. Donald is commemorated on the Gorslas War Memorial and the new memorial at Llanarthne. 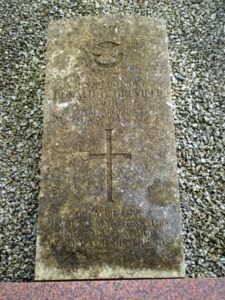 Frederick Norman Hewitt, Private, 5573221, Wiltshire Regiment. Frederick was the son of John Henry and Sarah Jane Hewitt, of Ponthenri. He served with the 4th Battalion, Wiltshire Regiment, which was attached to 129 Infantry Brigade, 43rd (Wessex) Division. The division landed in France on 24 June 1944 and took part in the break out from the Normandy beach-head. Frederick was killed in Normandy on 5 August 1944 aged 26. He is buried in St. Charles De Percy War Cemetery, France. Frederick is commemorated at Ponthenri.

Iestyn James, Sergeant, 1381676, Royal Air Force Volunteer Reserve. Iestyn was the son of David and Harriet Ann James, of Cefneithin, and served with 150 Squadron, RAF, which flew the Vickers Wellington III, based at RAF Snaith. The Squadron took part in the strategic night bombing offensive, and flew hundreds of sorties over occupied Europe. Iestyn was killed when his Wellington III, Serial X3309, was shot down during a raid on Bremen on 27 June 1942. He was 20 years old, and is commemorated on the Runnymede Memorial, Surrey.

Rhys Jones, Sergeant (Air Gunner), 1424723, Royal Air Force Volunteer Reserve. Rhys was the son of Daniel and Blodwen Jones of Tumble, and the husband of Megan Jones, of Gorslas. He served as an Air Gunner with 619 Squadron, RAF, which was a heavy bomber Squadron, equipped with the Avro Lancaster I, based at Woodhall Spa. Rhys was killed when his Lancaster was shot down over Germany on 1 September 1943. He was 23 years old, and is buried at Berlin 1939-1945 War Cemetery, Germany.

Elwyn Morgan, Leading Aircraftman (Navigator), 964106, Royal Air Force Volunteer Reserve. Elwyn was the son of Thomas and Jane Morgan, of Drefach, and the husband of Lilian Myfanwy Morgan, of Drefach. He served as a Navigator with 1 Squadron, RAF, which was a fighter squadron, equipped with the Supermarine Spitfire IXB, based at RAF Detling. Elwyn died on active service on 17 November 1944, aged 29, and is buried at Drefach (Capel Seion) Congregational Chapelyard, Wales. 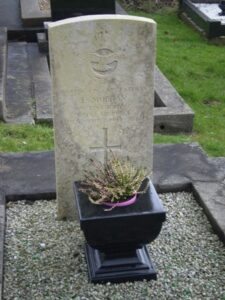 Thomas Glyndwr Morgan, Lance Bombardier, 993995, Royal Artillery. Thomas was the son of David and Mary Ann Morgan of Gorslas, and the husband of Meirion Morgan, of Llanelly. He served with the Royal Artillery, attached to 1 Airlanding Light Regiment, which was a specialist glider borne unit, equipped with light artillery pieces, especially formed to support airborne forces. Thomas took part in the famous Operation Market Garden, which was designed to seize the bridges over the River Rhine, and he landed in Arnhem at the opening of the operation. He was killed in action at Arnhem on 18 September 1944, aged 30, and is buried at Arnhem Oosterbeek War Cemetery, Netherlands. He is also commemorated at Gorslas. 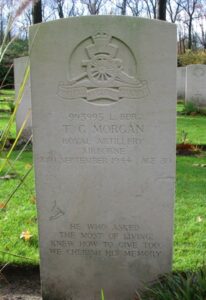 Owen Thomas. This man cannot presently be identified, but attended the school between 1932 and 1940.

Owen Urijah Thomas, Flight Sergeant (Air Gunner), 919279, Royal Air Force Volunteer Reserve. Owen was born in the Narberth district late in 1919, the son of Vincent Thomas and Mary Ann Thomas (nee Evans). The family later moved to Mynachlog Farm, Pontyberem, and Owen was educated at Gwendraeth Grammar School between 1932 and 1940. Upon leaving school he enlisted into the Royal Air Force Volunteer Reserve and by 1944 had become posted to 76 Squadron, RAF, which was a Handley Page Halifax equipped Bomber Squadron, which had been formed at RAF Linton-on-Ouse on 1 May 1941. The Squadron flew night raids on strategic targets over France and Germany throughout the war, and on the night of 12 August 1944 Owen took off in his Halifax as part of a large bomber group bound for Brunswick, as part of an experiment to operate without a Pathfinder force. The aeroplane was intercepted and shot down on the journey, not far from the target, and Owen was killed in the resulting crash on 12 August 1944. He is buried at Rheinberg War Cemetery, Germany.

Celt Williams, Flight Sergeant (Navigator), 1316112, Royal Air Force Volunteer Reserve. Celt was the son of Griff and Betty Williams, of Ponthenri. He enlisted into the Royal Air Force, and served in 218 Squadron, a heavy bomber Squadron which flew the Avro Lancaster III, based at RAF Chedburgh. The night of 31 December 1944 saw several Bomber Command raids on Germany, and Celt was killed on one of these when his Lancaster was shot down that night. He was 23 years old and is buried at Reichswald Forest War Cemetery, Germany. Celt is commemorated at Llandovery College.