Five Roads is a small village sat astride the B4039 road, midway between Pontyates and Furnace, on the meeting point of five roads, which gives the village its name. The local community has carried out research and raised funds to erect the villages first war memorial on 8 November 2014, which commemorates the six villagers who lost their lives at war: one during the Boer War, two during WW1 and three during WW2.

Joseph Davies, Corporal, 2109, 1st Battalion, Welsh Regiment. Joseph was born in 1869, the son of William and Jane Davies, of Heol Las, Five Roads. He had served with the army for several years prior to becoming a reservist, and returned to Five Roads, to work as a driver. Upon the outbreak of the Boer War in South Africa, Joseph was recalled to the colours, but married Dora Ann Lloyd, at Felinfoel prior to embarking with the 1st Battalion, Welch Regiment aboard the Kildonan Castle. The battalion arrived at the Cape by 22 November 1899, and was despatched to the Cape Colony. Joseph was killed in action during the Welsh Regiment’s successful assault on the strongly defended Boer position at Driefontein on 10 March 1900. He was 30 years old, and is buried at Driefontein, Bosrand. 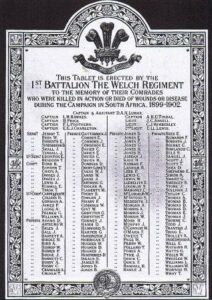 David Bennett, Private, 94375, Royal Welsh Fusiliers. David was born at Five Roads, the illegitimate son of Elizabeth Bennett. His mother married Walter Worboy, of Avon View, Pontyates in 1905. David enlisted on 23 April 1917 and was called up early in 1918, joining the Monmouth Regiment at Cardiff. After training, David was posted to France on 23 October 1918, and was posted to the 14th Battalion, Royal Welsh Fusiliers, which was in France as part of 113 Brigade, 38th (Welsh) Division. The division had spent most of 1918 in positions around Aveluy Wood, near Albert on the Somme, and from there had begun the final drive to victory in August 1918. David joined them in October, when they were pushing towards the Forest of Mormal, and he was wounded soon afterwards, at the Battle of the Sambre, on 4 November 1918. Sadly David died just two days later, on 6 November, aged just 19. He is buried at Englefontaine British Cemetery, France. 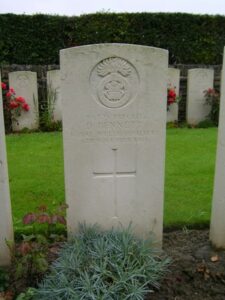 William John Morgans, Private, 73779, Royal Welsh Fusiliers. William was born at Burry Port, the son of David and Easter Morgans. The family later resided at The Blue Anchor, Pwll, but William was brought up with his grandfather, William Morgans, at 33, Sea View Terrace, Burry Port. William enlisted at Llanelli into army and in the summer of 1918 was posted to France, joining the 14th Battalion, Royal Welsh Fusiliers, which was attached to 113 Brigade, 38th (Welsh) Division. The Division had landed in France during December 1915 and had fought at Mametz Wood in 1916, before capturing Pilckem Ridge in 1917. The division took part in the great offensive on the Somme from 21 August 1918 onwards, during the Battle of Albert, and then moving east, where they fought at the Battle of Bapaume. Then the move began towards the mighty Hindenburg Line, and the Division carried on with their march east, fighting at the Battle of Havrincourt, and the Battle of Epehy. A short rest period ensued, during which time the Canal du Nord was breached, so opening a passage through the Hindenburg Line. The Division then fought at the Battle of Beaurevoir, where William was killed in action on 7 October 1918, aged 18. He is buried at Bois-Des-Angles British Cemetery, Crevecouer-Sur-L’Escaut, France. (Presently the identity of William Morgan is not certain, so this may not be the correct man, but it is believed locally that he resided at Ystodwen Farm, Sylen, and no other man of this name can be tied into the area). 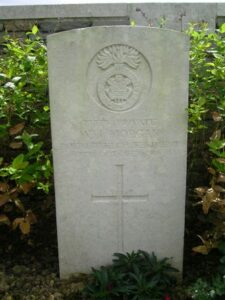 Daniel Davies, Private, 3963757, Sherwood Foresters (Notts and Derby Regiment). Daniel was the son of William and Jane Davies, of Isawel, Cynheidre. He enlisted into the army with his friend Cyril Davies, and was posted to the 2nd Battalion, Sherwood Foresters. The battalion joined the 1st Army in Tunisia, and fought in North Africa before taking part in the invasion of Italy. Daniel was killed at Anzio on 3 June 1944, aged 25, and is buried in Beach Head War Cemetery, Anzio, Italy.

David John James, Private, 7376415, Royal Army Medical Corps. David was born at Five Roads in about 1917. He served with the Royal Army Medical Corps. Very little is known of him, as his unit is not identified by the CWGC, but David was serving in North Africa when he was killed on 26 April 1941, during Rommel’s advance across the Western Desert. He was 24 years old, and is commemorated on the Alamein Memorial, Egypt.

John Gareth Vaughan Williams, Sergeant, 1316732, Royal Air Force Volunteer Reserve. Gareth lived at Rehoboth Manse. He served as a Navigator with 106 Squadron, Royal Air Force, which was a bomber Squadron, equipped with the Avro Lancaster. On the night of 25 June 1943, Gareth’s Lancaster, Serial R5572, took off as part of a 473 bomber raid on Gelsenkirchen. Thirty aircraft were shot down during the night, one of which was R5572, which crashed near Baak, Holland on the morning of 26 June 1943. Gareth and five other crewmen were killed in the crash. Gareth is buried at Steenderen General Cemetery, Gelderland, Netherlands, alongside his fellow crewmen.