Drefelin is a small village situated around half a mile from the twin villages of Drefach Velindre. The area was renowned for its quality weaving, and many woollen mills were once situated around these villages. Sadly, today these have all now closed, and only the National Woollen Museum in Drefach Velindre is now open. Clos-y-Graig Chapel in Drefelin contains a memorial plaque to its only member who fell during the Great War. The photograph has been kindly supplied by Raymond Jones. 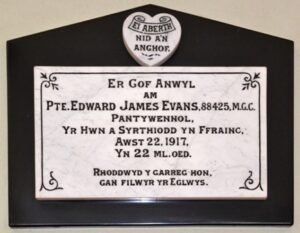 Edward James Evans, Private, 88425, Machine Gun Corps. Edward was the son of Henry and Elizabeth Evans, of Pantywenol, Velindre. He enlisted into the 4th Welsh at Carmarthen in November 1916, and in May 1917 moved to France, where he joined the 43rd Company, Machine Gun Corps, which was attached to the 14th (Light) Division. The Division was still at Arras, but soon moved to Ypres, where it relieved the 38th (Welsh) Division in August 1917 at Langemarck. Edward was killed at the Battle of Langemarck on 22 August 1917. He was 22 years old, and is commemorated on the Tyne Cot Memorial, Belgium. 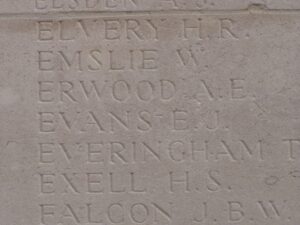