Cwmann sits astride the Carmarthenshire/ Ceredigion border, just within the limit of Carmarthenshire, in the Parish of Pencarreg. The War Memorial at Cwmann contains the names of ten men of the village that died as a result of the Great War. This has proved to have been one of the most difficult memorials to research, even with the small number of men commemorated upon it, as five of these men died at home. Some of these men have proved very difficult to pin down and identify, as they are not recognised as official war casualties by the Commonwealth War Graves Commission. As a result, as much information as is presently known has been written up about each of these men. 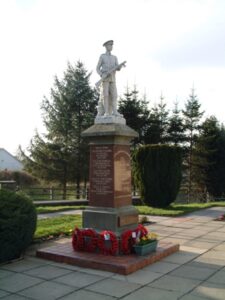 Tom Daniel, Private, M/408458, Army Service Corps. Tom was the son of John and Mary Daniel, of 4, New York, Cwmann. Not much is known of his war service, but he served in the Motor Transport branch of the Army Service Corps. During the Great War, as with all wars, the Army had to be constantly supplied with prodigious amounts of food, clothing, equipment, armaments and ammunition. The static nature of the front-lines on the Western Front allowed for development of a huge supply line to be established. Items arriving at the various ports in France were moved by the Army Service Corps, and Tom was a part of this huge machine. Tom managed to survive the War, but was overcome during the great Influenza Epidemic of late 1918. He was brought to Chiseldon Hospital where he died of sickness on 18 February 1919, aged 31. He is buried at Lampeter (St. Peter) Churchyard.

Jack Davies, Private, 533257, London Regiment. Jack was born at 1, Treherbert, Cwmann. He resided at Porth prior to the war, and enlisted into the 15th Battalion (Civil Service Rifles), London Regiment, which was attached to 140 Brigade, 47th (2nd London) Division. The Division had been in France since March 1915, and Jack joined them at sometime in 1916, probably after the Somme Offensive. Early in 1917 the Division moved north to Belgium, and took part in the Battle of Messines, and then in November 1917 fought at the Battle of Cambrai. In March 1918 the Division were situated near St. Quentin, and faced the German Spring Offensive here on 21 March, fighting at the Battle of St Quentin, and then in the rearguard action at the First Battle of Bapaume. In August 1918 the British attacked on the Somme, and the Division fought in the Battle of Albert, and then at the Battle of Bapaume. Jack was killed in action on 5 September 1918, and is buried at Peronne Communal Cemetery Extension, France. 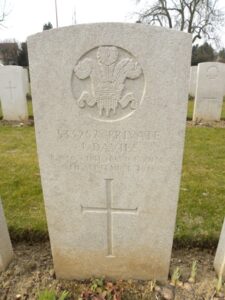 James Llewellyn Davies, Private, 536557, Royal Army Medical Corps. James was the son of John and Jane Davies, of Derlwyn House, Cwmann, Lampeter. He enlisted into the Royal Army Medical Corps at Chelsea, being posted to the 2/2nd Northumbrian Field Ambulance, which was attached to the 50th (Northumbrian) Division. The Division had moved to France during April 1915, fighting at Second Ypres, then during the Battle of the Somme. They then fought during the Battle of Arras, and at Passchendaele, before being hit by the German Spring Offensive of 1918. They were in the St. Quentin area when the German struck with brutal efficiency. James was Killed in Action on 31 March 1918, aged 23, during the great struggle to defend St. Quentin, and is buried at Namps-Au-Val British Cemetery. 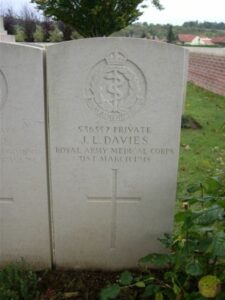 Llewellyn Davies, Private, 30422, Welsh Regiment. Llewellyn was the son of David and Mary Ann Davies, of Rhoslwyn, Cwmann. He enlisted at Pentre, into the 15th Battalion, Welsh Regiment, which was known as the Carmarthenshire Battalion, and was attached to 114 Brigade, 38th (Welsh) Division. The Division had moved to France at the end of 1915, being deployed around the Armentieres sector, before moving south to take part in the attack on Mametz Wood, part of the greater Battle of the Somme. After taking the wood, the Division had suffered so heavily that it wasn’t used again for almost a year, until taking part in the successful Battles of Pilckem Ridge and Langemarck. They fought with distinction throughout the great advance of 1918, and were pushing toward the Hindenburg Line in the Cambrai area when Llewellyn was wounded during the Battle of Cambrai. He Died of Wounds on 8 October 1918, aged 23, and is buried in Rocquigny-Equancourt Road British Cemetery, Manancourt, France. 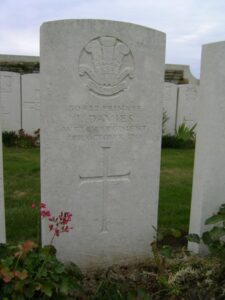 William Lewis Davies, Private, 47412, Northumberland Fusiliers. William was the son of John and Letitia Davies, of Penrhiw, Pencarreg. He enlisted at Preston into the Royal Fusiliers, then later transferred into the 10th Battalion, Northumberland Fusiliers, which was attached to 68 Brigade, 23rd Division. The Division had landed at Boulogne during August 1915 and fought during the Somme Battles, before moving to Ypres, and fighting at Messines. They fought on the Menin Road and at Polygon Wood, before moving to try and take the village of Passchendaele, which is where William was sadly killed in action on 17 October 1917, aged 25. He is remembered on the Tyne Cot Memorial, Belgium. 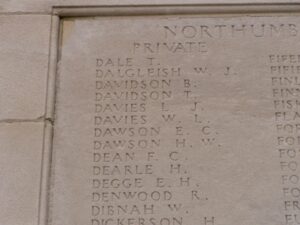 David Christmas Evans, Private, 4220, London Regiment. David was born in London, the son of David and Anne Evans. His parents were from Cwmann and the family had returned home prior to 1911, living at Cilgell Isaf Farm. David then returned to London and was living at 90, Blackfriars Road, Lambeth when he enlisted on 9 June 1915 into the 3rd/21st Battalion, London Regiment. He deserted the battalion after spending some time in hospital some weeks later and received 28 days detention as a result. Re-joining the battalion after his release, he was posted to France and on 10 July 1916 embarked at Southampton to join the 1st/2nd Battalion, London Regiment on the Somme. Within a week his health began to break down and David was admitted to the 16th General Hospital at Le Treport after being diagnosed with pleurisy. He returned to England on 2 August where he was diagnosed as having contracted tuberculosis and was discharged from the army as medically unfit on 31 August 1916. David spent some time at the West Wales Sanatorium at Llanybydder before being discharged and sent home. He died of pthisis at Cilgell Isaf on 8 May 1918, aged 20 with his aunt Letitia Williams by his bedside. He is buried in Brondeifi Chapel, Lampeter.  Jennifer Cairns, of Lampeter, managed to trace his service papers, which were used by myself to forward his case to the CWGC in order to get him properly commemorated as a casualty of the Great War. He was accepted for commemoration on 2 July 2020, and will be commemorated in the United Kingdom Book of Remembrance, until the location of his grave can be verified.

Tom Evans, 5457, Lance Corporal, Royal Welsh Fusiliers. Thomas was the son of William and Mary Evans, of Gwargate, Pencarreg. He had worked as a clerk at a colliery in Mardy prior to the war, after working for two years as a solicitor’s clerk in Lampeter. He had served with the Royal Welsh Fusiliers since landing in France on 23 November 1914, until being discharged on 13 March 1919. Thomas contracted tuberculosis, and died at the home of his brother-in-law, J. Thomas, of Ashleigh House, Llandeilo, on 28 January 1920, aged 22. Thomas is not eligible for commemoration by the CWGC, as his death cannot be proved to be linked to his war service.

Cecil George James, Writer, M32049, Royal Navy. Cecil was born at Milford Haven on 27 January 1900, the son of Alfred and Alice James. The family moved to Bryn Teify, Cwmann around 1907, where Alfred took up work as a painter and photographer. On 18 June 1918, Cecil enlisted into the Royal Navy, and was posted to Portsmouth, where he received his basic training at HMS Victory. He was then posted to HMS Birmingham, but was taken ill with Pulmonary Tuberculosis, and sent to Haslar Royal Naval Hospital in September 1920. Cecil was released from hospital, and returned home to Cwmann, but died there on 15 September 1921, aged 21. He is not commemorated by the CWGC, as he died too late for the cut off date.

John Jones, Private, 320234, Welsh Regiment. John was the son of Thomas and Elizabeth Jones, of Sunny Cottage, Gwernogle. He enlisted at Carmarthen into the Pembroke Yeomanry. During March 1916 the 1/1st Pembroke Yeomanry moved to Egypt, where it merged with the Welsh Border Mounted Brigade and formed the 4th Dismounted Brigade. On 2 February 1917 it merged with the 1/1st Glamorgan Yeomanry to form the 24th Battalion, Welsh Regiment, and became attached to 231 Brigade, 74th (Yeomanry) Division. The Division had formed in Egypt in January 1917 and had fought through the Palestinian Campaign, at the Battles of Gaza and the Battle and capture of Jerusalem. John was wounded during the Third Battle of Gaza, and died on 6 November 1917 aged 26. He is buried in Beersheba War Cemetery, Israel. The Welsh inscription at the base of his grave translates as; ‘Though dying far from fair Gwalia / it’s the same distance to a brighter heaven’. 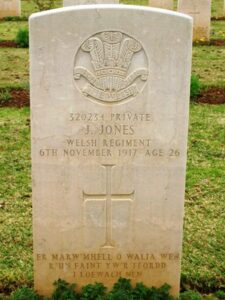 Thomas John Jones, Private, 320238, Welsh Regiment. Thomas was born at Cwmann, the son of Lewis and Mary Anne Jones. The family later resided at Tycefn, Llansawel. Thomas enlisted at Carmarthen into the Pembroke Yeomanry. During March 1916 the 1/1st Pembroke Yeomanry moved to Egypt, where it merged with the Welsh Border Mounted Brigade and formed the 4th Dismounted Brigade. On 2 February 1917 it merged with the 1/1st Glamorgan Yeomanry to form the 24th Battalion, Welsh Regiment, and became attached to 231 Brigade, 74th (Yeomanry) Division. The Division had formed in Egypt in January 1917 and had fought through the Palestinian Campaign, at the Battles of Gaza and the Battle and capture of Jerusalem. Thomas was killed during the Third Battle of Gaza, on 6 November 1917. He was 27 years old, and is buried at Beersheba War Cemetery, Israel. The Welsh inscription at the base of his grave translates as; ‘Without boastfulness after fighting, he remains with a cross above his place.’ 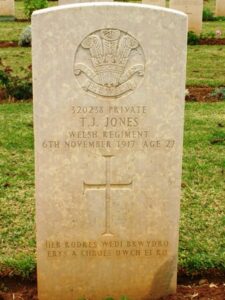 David Daniel Evans, Lance Bombardier, 918830, Royal Artillery. David was the son of Daniel Howell Evans, and Sarah Blodwen Evans, of Glyn, Cwmann. He served with the Headquarters detail of 5 Heavy Anti Aircraft Regiment, Royal Artillery. David was taken prisoner by the Japanese after their invasion of China. He died in captivity at Osaka Camp, Japan on 22 March 1944. David was 25 years old, and is buried at Yokohama War Cemetery, Japan. 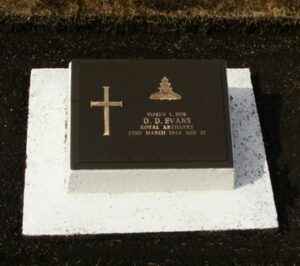 Daniel Myrddin Griffiths, Aircraftman 2nd Class, 627989, Royal Air Force. Daniel was the son of Daniel and Sarah Griffiths, of Treherbert, Cwmann. Prior to the war he resided with his wife, Dorothy Phyllis Mary Griffiths, at Monmouth. Daniel served as a Wireless Operator/ Air Gunner with 98 Squadron, Royal Air Force. Daniel was in France at the outbreak of war, and was evacuated aboard the Cunard Liner, SS Lancastrian. On 17 June 1940, Lancastrian came under attack from enemy aircraft, receiving three direct hits from a German Junkers 88 bomber. In less than 20 minutes, the luxury liner sank, taking with her an estimated 4,000 victims. Daniel was 24 years old when he died that day. His body was washed ashore, and is buried at L’Aiguillon-Sur-Mer Communal Cemetery, France.

Evan Henry Thomas, Seaman, Merchant Navy. The memorial shows that Evan lived at 4, Treherbert, Cwmann, and that he died in hospital in Sully, Cardiff on 15 September 1947, aged 26. He is not commemorated by the CWGC, so nothing further is presently known of him.

John Tegwyn Herbert Howell Williams, Private, 24143355, The Royal Regiment of Wales. John was born on 13 June 1950 at Cwmann. He served with the Welch Regiment, which later merged with the South Wales Borderers, to become the Royal Regiment of Wales. John was killed during a gun battle with IRA terrorists in Alliance Avenue, Ardoyne, Belfast on 14 July 1972, aged 22. His body was brought home for burial in Brondeifi Chapel, Lampeter.