Cilycwm is a small village located about four miles north of Llandovery, on the west bank of the River Gwenlais, in the Towy Valley. There are several known small war memorials within several places of worship in the area, notably at Cilycwm Church, Cwmsarnddu Baptist Chapel, Soar Chapel, Rhandirmwyn Church and Cynghordy Church. This page commemorates the two men commemorated in Cwmsarnddu Baptist Chapel, plus the one man commemorated at Soar Chapel.

William John Hughes, Driver, W/3512, Royal Field Artillery. William was the son of Frederick and Mary Hughes, of Tynyberth, Cilycwm, and enlisted at Swansea into the Royal Field Artillery. He served with ‘A’ Battery, 122nd Brigade, Royal Field Artillery, which was attached to the 38th (Welsh) Division. The Division had fought on the Western Front since arriving in December 1915, and had been stationed in every part of the line by the turn of 1917, from Flanders to Mametz Wood, to Ypres and then to Armentieres. The Division were holding the lines east of Armentieres over the winter of 1917/18, when William became ill. He was brought to Calais, probably to No. 35 General Hospital, where he died on 18 March 1918, aged 25. He is buried at Les Baraques Military Cemetery, Sangatte, France. 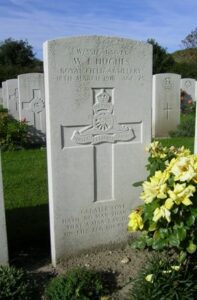 Daniel Richards, Rifleman, R/9943, Kings Royal Rifle Corps. Daniel was the son of David and Sarah Richards, of Plasnewydd, Cilycwm, Llandovery. He enlisted at Ammanford into the Welsh Regiment but was later transferred to the 9th Battalion, Kings Royal Rifle Corps, who formed part of 42 Brigade, 14th (Light) Division. The Division had landed at Boulogne on 20 May 1915 and fought at Hooge, where they were to gain the dubious honour of being the first Division to be attacked by flamethrowers. Daniel was wounded there by shrapnel, and returned home for treatment, but died in hospital at Bury St Edmunds of wounds on 25 October 1915, aged 24. He was given a military funeral at Cwmsarnddu Baptist Chapelyard. 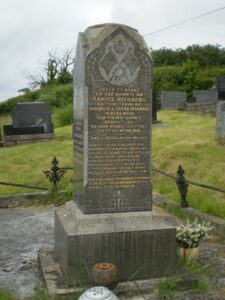 Cyril Frederick Hughes, Fusilier, 4197439, Royal Welch Fusiliers. Cyril was the son of John Hughes, and of Elizabeth Hughes, of Burma House, Cilycwm. He served with the 1st Battalion, Royal Welch Fusiliers, which was a regular army battalion, sent to the Far East in 1942 after taking part in the evacuation of Dunkirk. Cyril was killed on 20 April 1943 while the battalion was still in India. He was 24 years old, and is buried at Maynamatti War Cemetery, Bangladesh.