Cilycwm is a small village located about four miles north of Llandovery, on the west bank of the River Gwenlais, in the Towy Valley. There are several known small war memorials within several places of worship in the area, notably at Cilycwm Church, Cwmsarnddu Chapel, Soar Chapel, Rhandirmwyn Church and Cynghordy Church. This page commemorates the one man commemorated in St. Michael’s Church at Cilycwm, plus one other local man who does not appear to be commemorated anywhere in the area. 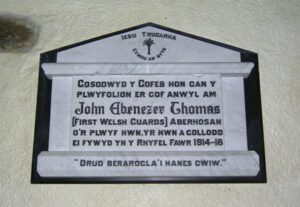 John Ebenezer Thomas, Private, 1071, Welsh Guards. John was from Cilycwm. He married Dorothy May Davies, of Glynborthyn Shop, Caio in 1915. John served with the 1st Battalion, Welsh Guards, attached to 3 Guards Brigade, Guards Division. The division saw its first major action during the Battle of Loos on 25 September 1915, remaining in the area during the coming months, where they also fought in the subsequent Action of Hohenzollern Redoubt. In July 1916 the Division moved to the Somme, where they fought at the Battle of Flers-Courcelette, which is where John was killed on 10 September 1916. He was 25 years old, and is buried at Delville Wood Cemetery, Longueval, France. 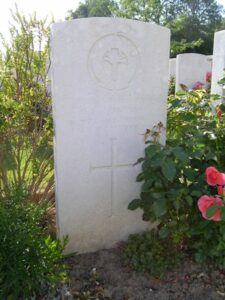 George Williams, Private, 14684, King’s Shropshire Light Infantry. George was born on 19 March 1894, the son of Thomas and Elizabeth Williams, of 47, Lion Street, Hay. He had worked as a Groom with Mr. Lewis, of Llys Newydd, Cilycwm prior to the war and enlisted in September 1914 into the 7th Battalion, King’s Shropshire Light Infantry. The battalion was attached to 76 Brigade, 25th Division, and moved to France on 28 September 1915. The division made its way across northern France, and took up positions near Ploegsteert Wood, in Belgium. It then spent a period in trenches around Sanctuary Wood, east of Ypres, before enjoying a spell of training out of the line at Steenvoorde. The division took up new positions at The Bluff, east of Ypres, in November, before moving again to Northern France. George was killed in action here on 3 December 1915, aged 21. He is buried in Y Farm Military Cemetery, Bois-Grenier, France. George is not commemorated locally. 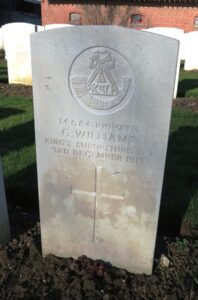