Cenarth is situated on the banks of the River Teifi, about five miles east of Cardigan, and two miles west of Newcastle Emlyn. It is a popular tourist destination, being situated at the point where the River Teifi emerges from a deep ravine over a ledge, creating the spectacular Cenarth Falls. The village also holds a coracle museum, and is home to the National Coracle Centre. The men of the parish who fell during both world wars are commemorated on the War Memorial which is situated near to the parish church, which is dedicated to St. Llawddog. The photographs of the memorial are courtesy of Mike Berrell. 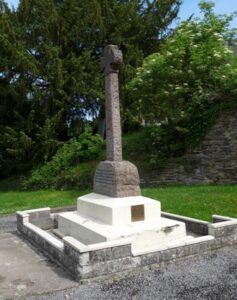 George Lawrence Evans, Private, South African Infantry. George was born in 1884, the son of William and Margaret Evans, of Cenarth. He had left Wales to work as an electrical engineer at the Rose Deep Gold Mine in South Africa several years prior to the war, and in August 1914 enlisted into the South African Infantry. He served in East Africa with a Motor Cycle Unit of the South African Infantry during the war, but his service took a heavy toll on his health, and he returned to South Africa after the armistice. George died at Johannesburg in the summer of 1918, and was buried there with full military honours. He is not commemorated as a war casualty by the CWGC.

Haydn Stanley Evans, Private, 203096, Welsh Regiment. Haydn was the son of John and Hannah Evans, of 2, Cawdor Terrace, Cenarth. He had worked with his mother Hannah in their shop at Llanelli prior to 1911, before marrying, and living with his wife Margaret Evans, at 22, Wellfield Terrace, Llanelli. He enlisted there into the 1st Battalion, Welsh Regiment, which was attached to 84 Brigade, 28th Division. The Division formed in England between December 1914 and January 1915 from regular units returning from India, Singapore and Egypt. During January 1915 it moved to France, landing at Le Havre and moved to the Western Front, where it saw its first major action during the Second Battle of Ypres. Following serious casualties at Ypres, a Composite Brigade was formed, composing of the 2nd Battalion, the Buffs, 2nd Battalion, the Cheshire’s, 1st Battalion, the Welsh, and 1st Battalion, the York and Lancaster. It was dissolved on 19 May 1915, and the formation assumed its normal configuration, taking part in the Battle of Loos. During October 1915, the Division embarked at Marseilles, and proceeded to Egypt, and in November moved on to Salonika where the Division then remained. Haydn was felling trees on 22 May 1918, when he slipped and fell into a ravine, seriously injuring himself. The 28-year-old died two hours later. Haydn is buried in Sarigol Military Cemetery, Kriston. He is also remembered on the grave of his mother, at Box Cemetery, Llanelli. Haydn is not commemorated at Cenarth.

David James, Private, 54510, Welsh Regiment. David was born at Cenarth in 1888. Prior to the war he resided with his wife, Mary James, at 2, Glaciers Row, Newcastle Emlyn. David enlisted with the 19th Battalion, Welsh Regiment, which was the Pioneer Battalion to the 38th (Welsh) Division. The Division had landed in France during December 1915 and had spent their first winter in the trenches near Armentieres. In June they marched south to the Somme, where they were tasked with the capture of Mametz Wood. The attack on the wood began on 7 July 1916, but met with fierce resistance, and it took until 11/12 July to clear the wood. The Division suffered terrible casualties at Mametz, and were taken out of the line, and moved to Ypres to rebuild, and remained here for the next twelve months, in the front north of Ypres. David was killed in action here on 28 July 1917, prior to the Divisions attack on the Pilckem Ridge. He was 29 years old, and is buried at Bard Cottage Cemetery, Belgium. 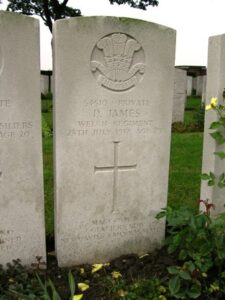 James Jones, Lance Corporal, 41412, Royal Engineers. James was the son of Benjamin and Elizabeth Jones, of Gellidywyll, Cenarth. He enlisted at Carmarthen into the Royal Engineers, and was posted to France on 31 July 1915 with the 350th E & M Company, Royal Engineers. James served on the Western Front until being wounded just prior to the German Spring offensive, which was launched on the Somme on 21 March 1918. He died of wounds on 20 March 1918, aged 40, and is buried at Lapugnoy Military Cemetery, France. 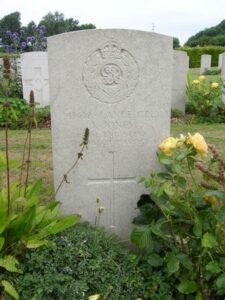 Lemuel Thomas Rees, Private, 29573, South Wales Borderers. Lemuel was born at Llandygwydd in 1895, the son of John and Sarah Rees, of Blaenanerch. He enlisted at Brecon into the South Wales Borderers, and was posted to France in 1916, joining the 6th Battalion, South Wales Borderers, which was the Pioneer Battalion to the 25th Division. The Division had been in France since 26 September 1915, and defended Vimy Ridge against a German attack in May 1916. They then moved to the Somme, and attacked on 3 July near Thiepval. They fought throughout the Battle of the Somme, and then moved to Ploegsteert, where they held the line for the months leading up the Battle of Messines in June 1917. After fighting at Messines, the Division moved north, and fought at Pilckem, before moving south again, where they took up positions around Bullecourt in March 1918, where it was used to reinforce the badly depleted British units that were hit in the area by the German Spring Offensive. They moved north to Flanders to rest on 30 March 1918, but were caught up in the German Lys Offensive, suffering heavy casualties before being moved to the Aisne to rebuild. On 26 May 1918 they took up positions south of the Aisne, to guard against a predicted German Offensive, which hit them the following day, and during the coming days the Division was virtually annihilated. The Division moved to England to rebuild, returning to France in September, and taking part in the 100 days offensive. Lemuel had survived the war, but had been evacuated sick to Wimille. He died there on 13 November 1918, aged 23, and is buried at Terlincthun British Cemetery, Wimille, France. 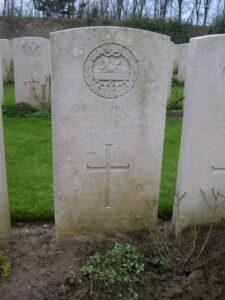 William Dennis Sexton, Private, 202758, Welsh Regiment. William was born in 1888, the son of Denis and Frances Sexton, of Llandala, Cenarth. He married Hannah Jones at Newcastle Emlyn in 1913, and the couple resided at Pantivor, Pentrecourt. William enlisted at Carmarthen into the Welsh Regiment, and was sent to France in 1917, joining the 15th Battalion, Welsh Regiment, which was known as the Carmarthen Pals battalion, attached to 114 Brigade, 38th (Welsh) Division. The battalion had been in France since 2 December 1915, and had fought at Mametz Wood in July 1916, before moving to Ypres, where it held the Boesinghe sector for almost twelve months, prior to the attack on Pilckem Ridge on 31 July 1917. The 15th Welsh remained in the line, and also took part in the Battle of Langemarck, before the entire Division was moved to positions near Armentieres over the winter. After the Germans launched their offensive on the Somme on 21 March 1918, the Division was moved back to the Somme, and took up positions north of Albert, around Aveluy Wood. On 21 August 1918, elements of the 15th Welsh crossed the flooded River Ancre, and created a bridgehead, which was crossed by the remainder of 114 Brigade over the coming days, before launching their assault on the Thiepval Ridge. Over the coming weeks the Division drove towards the Hindenburg Line, before heading towards Le Cateau and the Forest of Mormal. William was wounded during the Battle of the Selle, and died on 27 October 1918, aged 30. He is buried at Inchy Communal Cemetery Extension, France. 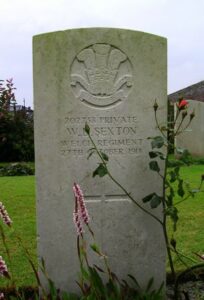 Enoch David Ivor Griffiths, Signalman, 2331782, Royal Corps Of Signals. Enoch was born in 1917, the son of John and Rosamund Griffiths, of Cenarth. He served with the 11th Armoured Division Signals. The 11th Armoured Division, was formed in 1941, and landed at Juno Beach on 13 June 1944. The Division then took part in the break-out from Normandy, and in the drive to Amiens, before heading northwards through France and Belgium into Holland and Germany, taking part in Operation Market Garden, he Battle of the Bulge, and Operation Varsity. Enoch was killed during heavy fighting to capture the villages of Brochterbeck and Tecklenberg on 5 April 1945. He was 27 years old, and is buried in Hanover War Cemetery, Germany. 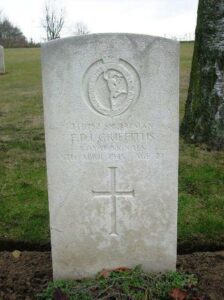