Carmarthenshire Constabulary was the original Police Force for the county, with its headquarters in Carmarthen Town. A number of local Policemen served during the Great War, but four lost their lives. These men are commemorated on a brass plaque which is located inside Carmarthen Police Station. 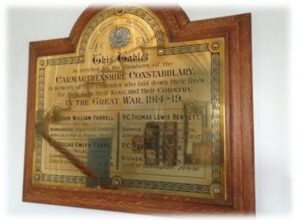 Thomas Lewis Bennett, Sapper, 175528, Royal Engineers. Thomas was born at Kidderminster in 1894, the son of Thomas and Elizabeth Bennett. The family had moved to the School House, Ferryside prior to the outbreak of war, where Thomas became a Policeman, and his father ran his own grocery business. Thomas enlisted at Carmarthen into the Pembroke Yeomanry in December 1914, and on 18 June 1916 transferred into the Royal Engineers. He was posted to France, and served as a Sapper in 174 Tunnelling Company from 8 July 1916. This Tunnelling Company served on the Western Front throughout the war, and Thomas joined them on the Somme. By October 1916,174 Tunnelling Company had moved north of the Ancre, facing Beaumont-Hamel, before following the German withdrawal in 1917 towards the Cambrai area. Thomas was killed in action here on 20 November 1917, during the Battle of Cambrai. He was 23 years old and was buried in Croisilles Railway Cemetery, France. His grave was lost during the battle but as he was definitely known to have been buried in the cemetery, Thomas is now remembered by a Special Memorial. His parents later moved to the Red Lion Hotel, Drefach, Henllan. 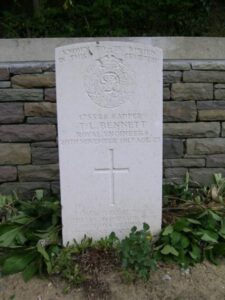 Rees Connick, Stoker, K/53680, Royal Navy. Rees was born on 16 April 1892, the son of Thomas and Ann Connick, of 31, Mysydd Terrace, Landore, Swansea. He had resided at Llanelli prior to the war, working for the GWR before becoming a policeman, based in Llanelli. In July 1918 Rees was released from his duties to join the Royal Navy. He was based at HMS Vivid, but within weeks had taken ill, and died of pneumonia at Plymouth on 20 September 1918. He was 26 years old, and is buried at Swansea (Cwmgelly) Cemetery.

William John Davies, Corporal, 3244, Welsh Guards. William was born in 1884, the son of Joseph and Elizabeth. Davies, Aberdauddwr, Lampeter. He served as a Policeman at Llanelli prior to the war and enlisted at Pembrey into the 1st Battalion, Welsh Guards, which was in France attached to the 3rd Guards Brigade, Guards Division. The Welsh Guards saw their first major action during the Battle of Loos on 25 September 1915, remaining in the area during the coming months, where they also fought in the subsequent Action of Hohenzollern Redoubt. In July 1916 the Division moved to the Somme, where they fought at the Battle of Flers-Courcelette, and then at the Battle of Morval, capturing Lesboeufs Village. They remained here for the winter, and in March 1917 took part in the advance caused by the German Retreat to the Hindenburg Line. Later that year they moved north to Ypres, where they fought at the Battle of the Pilckem, and then at the Battle of the Menin Road, Battle of Poelcapelle and the First Battle of Passchendaele. November saw them move south again, where they took part in the Battle of Cambrai. They remained in the area over the final winter of the war, and were stationed near Gouzeaucourt when William was killed in action on 26 February 1918. He was 33 years old, and is buried at Level Crossing Cemetery, Fampoux, France. William is not commemorated on the original Carmarthenshire Constabulary War Memorial or the new Dyfed Powys Police Memorial. 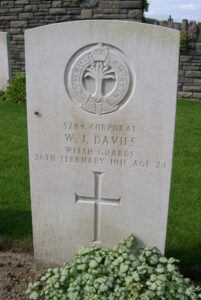 Edgar Emlyn Evans, Guardsman, 25838, Grenadier Guards. Edgar was the son of George and Sarah Evans, of Gwalia, Llandebie. He was a policeman prior to the war, and enlisted at Ammanford into the 2nd Battalion, Grenadier Guards. The battalion had been in France with the 3rd Division since the Battle of Mons, and had fought through the retreat to the Aisne. They had fought at First Ypres, and in August 1915 were attached to the newly formed 3rd Guards Brigade, Guards Division. The Division fought through the Battle of Loos, then at Flers and Morval during the 1916 Somme Battles, and saw much action at Third Ypres. They fought during the Battle of Cambrai and were in the area when the German Spring Offensive was launched on 21 March 1918. Edgar was Killed in Action during this traumatic period, on 4 April 1918, aged 25, and is buried at Bucquoy Road Cemetery, Ficheux, France. 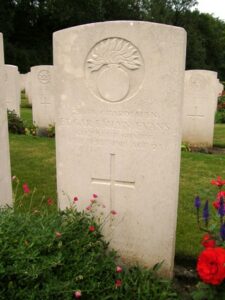 John William Farrell, Bombardier, W/5188, Royal Field Artillery. John was the son of John William and Eleanor Elizabeth Farrell, of Chelsea, London. He was a Police Constable at Ammanford prior to the war, and enlisted there into the Royal Field Artillery, serving with their ‘D’ Battery, 2nd Brigade. John was wounded at Ypres, during the Battle of Messines, and was evacuated to the Casualty Clearing Station at Proven, where he died of wounds on 10 June 1917, aged 25. He is buried at Mendinghem Military Cemetery, Belgium. 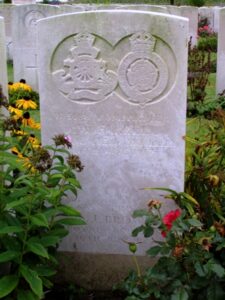