St. Peter’s Church is the Civic Church of Carmarthen, and is situated in a prominent position in the arc formed by Church Street and St. Peter’s Street. There are several war memorials inside the Church: two separate memorials to those who fell during both world wars; another to the airmen of Carmarthen who fell during the Second World War; a book of remembrance for those of the parish who fell during the Second World War; and also several memorials to individual men, including to one man who fell during the Boer War. The Carmarthen Grammar School memorials are contained within a small chapel within the church and are on a separate page on this website. There are also several flags on display, including the Great War colours of the 15th Welsh, 24th Welsh and Welsh Guards, while one of the stained glass windows in the Church was erected to commemorate the life of local officer Paul Chancourt Girardot who fell in 1914.

Inside the entrance to St. Peter’s Church is a large wooden memorial which lists all of the Parishioners of the Church who served during the Great War. The memorial denotes those who fell by a red cross alongside, but sadly this mark seems to have not been applied properly when the lettering was regilded, and as a result many of the casualties are not marked properly. This would be easy enough to correct, using a gilded cross perhaps, utilising the names of the fallen on the Great War Memorial plaque within the Church as a guide, and it would be fitting if this was to be done when the board is next refurbished. The names are in six columns, totalling 346 men. 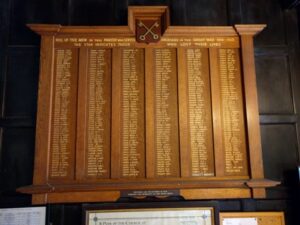