Carmarthen Infirmary, which is situated at Priory Street, Carmarthen, was founded in 1847 upon the agreement of the town’s upper classes in order to supply the sick poor with medical treatment. The original Infirmary was formed inside Carmarthen Jail, but this proved to be unsuitable, necessitating the building of a purpose built Infirmary which was opened in July 1858. The Infirmary was used for treating military casualties during the Great War, after being taken over by the Red Cross, and was equipped with twelve beds for the treatment of wounded soldiers, sponsored by the Red Cross. It was extended in 1936, and upon the creation of the NHS in 1948 became an NHS Hospital, although Glangwili Hospital, which had been built as an American Military Hospital during WW2, was already being utilised for treating the local people. Carmarthen Infirmary eventually closed in 1996, and has since fallen into disrepair, before being sold and converted into flats.

The building housed a small collection of brass memorial plaques which commemorate the Red Cross Hospital, the one nurse who fell during the Great War, and the former Matron of the Hospital, Linda Eliza Ditcham, RRC, as well as several other plaques, all of which have since been relocated to Glangwili Hospital.

Many local women from the various V.A.D. (Voluntary Aid Detachment) units across the county (which was chaired by Dame Margaret Pryse-Rice of Llwynbrain) took turns working at the Hospital during the war, assisting the regular Nurses, and throughout the war a number of sick and wounded soldiers of all nationalities, British, Canadian, Australian and Belgian, were treated there.

Local motor car clubs organised days out for the wounded troops at various times: for example in July 1916 over sixty wounded soldiers, conveyed by an armada of sixteen motor cars and twenty one cycles and sidecars, were treated to a day on the beach at Llansteffan; in May 1918 fifty wounded men were conveyed by a motor car and two horse driven transport waggons from Carmarthen Remount Depot to Pembrey, where they spent the day relaxing on the sands; local dignitaries often held tea and dinner parties in their homes for groups of men; while various plays, sing-songs and tea parties were regularly held around the town to provide entertainment and to raise funds for comforts for the men.

Frances Ethel Brace, Staff Nurse, Queen Alexandras Imperial Military Nursing Service. Frances was born early in 1886, the daughter of William and Jane Brace of Beaver’s Hill, Manorbier. By 1901, Jane had passed away, and the family lived at Great Honeyborough Farm, at Neyland, where Frances worked for her father. She then trained as a nurse, obtaining a post at Carmarthen Infirmary at sometime in 1912. After four years at Carmarthen, Frances then volunteered for service with Queen Alexandra’s Imperial Military Nursing Service on 16 June 1916, and was posted to a Field Ambulance in Salonika. The British had opened up a front in Salonika late in 1915 to aid the Serbian Army against an attack by Austro-Hungarian troops. The campaign became better known for the disease and suffering in the taxing conditions the troops faced there. Frances was one of many to succumb to illness at Salonika. She contracted malaria, and was evacuated to the Military Hospital at Malta, where she died on 21 September, 1916, just three months into her military service. She was by then 30 years old, and is buried at Pieta Military Cemetery, Malta. Her Memorial Plaque, together with its Buckingham Palace accompanying slip and envelope, two contemporary photographs of Frances at a field hospital, another of her grave, and another of the Cosheston Memorial, together with related newspaper cuttings and a silk memorial cloth, printed with her photograph and an epitaph, were sold at Sotheby’s in 2000 for £770. 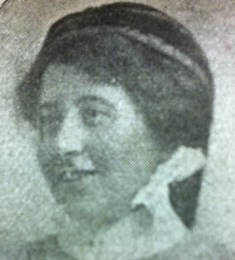 Linda Eliza Ditcham, RRC, Matron, Carmarthen Red Cross Hospital. Linda was born in Kingsland, Middlesex in 1856, the daughter of George Thomas Pearce Ditcham and Mary Ditcham. By 1899 Linda had become Matron at Carmarthen Infirmary, which at the time was being run by Morgan W. Williams, M.B., with a staff of six nurses. Linda took up the joint roles of Matron of Carmarthen Infirmary and Lady Superintendent of Carmarthen Red Cross Hospital during the duration of the Great War, and for her services was awarded the order of the Royal Red Cross in 1917. She continued as Matron at Carmarthen for several years after the war and died there on 5 June 1926, aged 69.

There were frequent reports in the local newspapers about men being discharged from the hospital after successful treatment, but the news was not always good: On 11 January 1918 news was received at the hospital that on 4 January 1918 Gunner William Hooton Field, 105623, ‘A’ Battery, 82nd Brigade, Royal Field  Artillery, a former patient at Carmarthen, had died of wounds in Belgium and was buried in Dozinghem Military Cemetery, while several other patients died while being treated in the hospital, among them:

George Ernest Vernon Champion, Sergeant, 33268, King’s Liverpool Regiment. George was born at Middlesex in 1879. He enlisted at Haverfordwest on 15 September 1914 into the 7th Battalion, King’s Shropshire Light Infantry. A year later he transferred to the King’s Liverpool Regiment, and was stationed with the battalion at Carmarthen before it embarked for Salonika. He had served there for almost two years before being invalided home through the effects of malarial fever. He was subsequently discharged and went to a sanatorium at Neath, and returned from to his home at 19, Hawthorne Cottage, Johnstown about two weeks before his death from tuberculosis on 6 June 1918, aged 40. He is buried in Carmarthen Cemetery. A contemporary newspaper report mentioned his funeral: ‘The funeral took place on Thursday, the 6th, at the Cemetery. The Rev. Father Nicholas officiated throughout. A party of the Labour Battalion acted as bearers. The mourners were: Mrs. Champion (widow); Mr. Russel, Milford Haven (brother-in-law) Miss Summers and Master H. Summers, Haverfordwest (nephew and niece); Miss Summers, Haverfordwest (cousin); and Miss Griffiths, Haverfordwest. Beautiful wreaths were sent by the following – Widow and niece Mrs. Murphy, Haverforwest; Mr. and Mrs. Summers; Kathleen, May & Annie (Mental Hospital); all at Laurel Cottage; Mr. and Mrs. Pugh; Mrs. Rogers, Lammas-street. Mrs. Champion wishes to thank all those who sympathised with her in her sad bereavement.’ 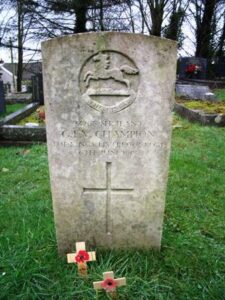 Albert John Guthrie, Lance Corporal, 36, Australian Engineers. Albert was the son of David and Elizabeth Ann Guthrie, of 471, Newcastle Street, Perth, Western Australia. He served with the 2nd Field Company, Australian Engineers, attached to the 1st Australian Division, and had seen service at Egypt and Gallipoli before taking ill, and being evacuated to Britain, where he was sent to the Red Cross Hospital at Carmarthen. Albert died at Carmarthen on 9 November 1915. He was 25 years old, and was buried with full military honours at Carmarthen Cemetery. A local newspaper contained the following account of his funeral; ‘The funeral of Sergeant A. J. Guthrie, Australian R.E., who passed away at the Red Cross Hospital, Carmarthen, took place on, November 11, the interment being at the cemetery. The Rev. B. Parry Griffiths, vicar of St. Peter’s assisted by the Rev. Itar Edwards, curate, officiated. Despite the rain, large crowds of townspeople watched the mournful cortege on the way to the burial ground, and there were manifestations of genuine sympathy in all quarters. Preceding the hearse was the Boy Scouts Band, under the scoutmaster, Mr. G. Humphreys, and a large number of wounded soldiers. The coffin, which was draped with the Union Jack, was covered with a very large number of beautiful wreaths. The chief mourners were Private H. D. Guthrie, of the A.I.F. (brother of deceased), who has also been wounded; and an uncle of the deceased. Amongst those present were Lieutenant-General Sir James Hills-Johnes, V.C.. G.C.B., Dolaucothy: Mr. Pryse-Rice, Llwynybrain; Revs. A. Fuller Mills, W. D. Rowlands and E. Ungoed Thomas; Drs. Parry, Williams, and Harris; Nurse Ditcham, and a number of other nurses. The Last Post was sounded at the graveside.’ 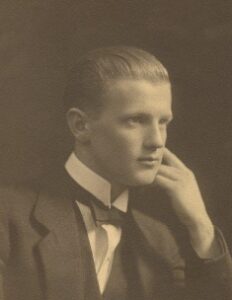 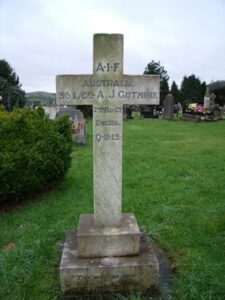 Thomas Jolley, Driver, 3836, Royal Field Artillery. Thomas was the son of Robert and Clarissa Elizabeth Jolley, of 7, Spa Terrace, Askern, Doncaster, Yorks. He had moved to 5, Church Street, Carmarthen several years prior to the war, and worked at the Ivy Bush Royal Hotel. Thomas enlisted at Carmarthen into the 38th Welsh Divisional Royal Field Artillery, and was posted to the 24th Reserve Welsh Battery. He became ill with pneumonia while in training at Swanage, and was discharged from the army as unfit, taking up employment in a munitions factory. Thomas became ill again though, and died of emphysema in Carmarthen Infirmary on 21 April 1917, aged 22. He was buried at Carmarthen Cemetery. 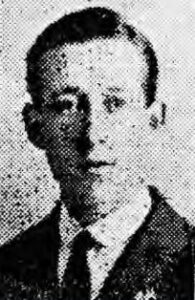 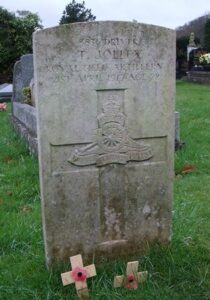 Thomas Jones, Private, 33328, King’s Liverpool Regiment. Thomas was born at Everton in 1874. He enlisted at Salford on 4 September 1914 into the 4th Battalion Lancashire Fusiliers. On 4 November 1915 he was transferred to the 2nd Garrison Battalion, King’s Liverpool Regiment. He became ill, and was discharged from the army as medically unfit on 17 January 1916 after suffering a series of epileptic fits and being diagnosed with dementia. Thomas died at Carmarthen Hospital on 26 February 1916, aged 42, and is buried at Carmarthen Cemetery. His effects were sent to his sister, Mrs Mary Gray, at 69, Chepstow Street, Walton, Liverpool. 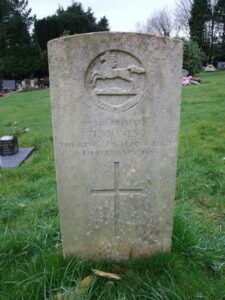 William Henry Russen, Private, 21969, Welsh Regiment. William was born in Marylebone early in 1895, and resided at Cwmmarch, Llandyssul prior to the war. He served with the 3rd Battalion, Welsh Regiment, which was a home service battalion, used for reinforcing the Welsh Battalions on the Western Front. William died of lockjaw on 25 October 1915, after cutting his leg during a riding accident. He was 21 years old, and is buried at Carmarthen Cemetery. 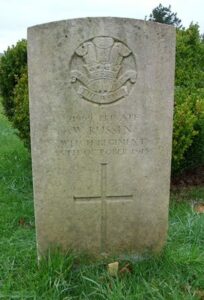 John Clement Sharman, Private, 1373, 3rd County of London Yeomanry (Sharpshooters). John was born in 1894, the son of Charles William and Mary Ann Sharman, of 74, Loveridge Road, West Hampstead. He had served at Gallipoli from 28 April 1915 with the 3rd County of London Yeomanry, which was nicknamed the Sharpshooters, before being invalided to England after becoming ill. He was among a batch of men sent from Cardiff Hospital to Carmarthen in October 1914. John died of dysentery at Carmarthen Infirmary on 14 April 1916, aged 21. A funeral procession was held in Carmarthen, and his body was laid at Christ Church before being taken home, and he was buried with full military honours at Hampstead Cemetery, London. John is commemorated on the Screen Wall at Hampstead, alongside his brother George, who was killed in action in France on 9 April 1917 and is buried in Heninel-Croisilles Road Cemetery. 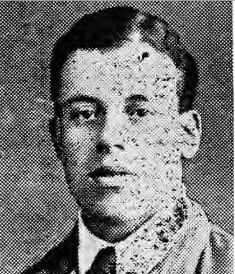 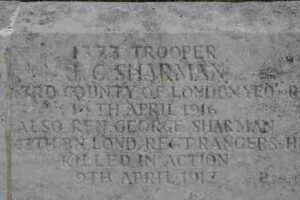