The main Post Office building in Carmarthen is in King Street. Several Postmen from the Town lost their lives during both World Wars, and are commemorated on a Memorial within the building, which is made of oak, with two brass plaques mounted, which contain the names of the fallen. With the Carmarthen Post Office now closed, the memorial has been relocated to the Callers Office at Carmarthen Delivery Office, Stephens Way, Carmarthen. 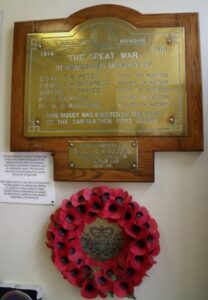 Thomas Davies, Sapper, 194689, Royal Engineers. Thomas was the son of Daniel and Mary Davies. He married Beatrice Alice Griffiths, of Bancyfelin, in 1909, and the couple set up home at 9, Glannant Road, Carmarthen, where their son Daniel Bertram Davies was born. Thomas enlisted at Carmarthen on 30 November 1915 into the Royal Engineers, and originally served with the Postal Section, before being posted to the 35th Airline Section. The Section worked with a Tunnelling Company, and was stationed at Arras. Thomas was wounded in January 1917 whilst on wiring duties, but returned to action soon afterwards. At roll call on the morning of 15 July 1917, Thomas was found to be missing. He was found hanging in his billets by some friends, a subsequent Court of Enquiry finding that he committed suicide, although no reason could be found. He was 38 years old, and is buried at Ecoivres Military Cemetery, Mont-St-Eloi, France, in Grave Ref. VI. K. 9. 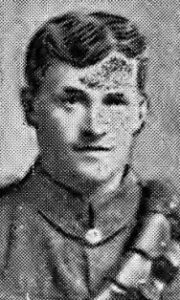 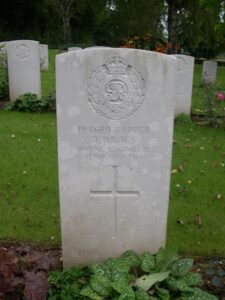 Ernest Malcolm Duckfield, Company Quarter Master Sergeant, 21, Royal Engineers. Ernest was the son of Alfred and Martha Duckfield, of 31, Spilman Street, Carmarthen. He joined the staff at Carmarthen Post Office in 1907, and enlisted at Carmarthen with his brother William into the 1/1st Welsh Field Company, Royal Engineers. The company was attached to the 53rd (Welsh) Division, and sailed from Devonport in July 1915, arriving at Mudros by 5 August 1915. From here they moved to Gallipoli, landing on 9 August. Here the Division was flung into a suicidal attack on strongly defended Turkish positions, and spent the next few days in isolated pockets, fighting against a Turkish counter-attack during the Battle of Sari Bair, and then at the Attack on Scimitar Hill. Ernest was killed during the chaotic fighting that reigned during those terrible days, on 20 August 1915. He was 30 years old, and is buried at Hill 10 Cemetery, Gallipoli. 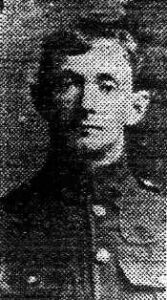 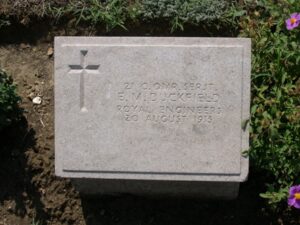 George Meyrick, Private, 282101, Lancashire Fusiliers. George was born at Swansea, the son of Richard and Ann Meyrick. He was working as a Postman at Talog prior to the outbreak of war, and married Ann Simon in 1906. The couple set up home at 22, Parcell Terrace, Priory Street, Carmarthen. George enlisted at Carmarthen into the Army, and was posted to France after training, where he joined the 2/7th Battalion, Lancashire Fusiliers, which formed part of 197 Brigade, 66th (2nd East Lancs) Division. The Division concentrated on the Western Front by 16 March 1917 and moved to the Flanders Coast. At the end of September 1917 they moved to Ypres, and took part in the Battle of Poelcapelle. They then moved south to the Somme, and on 21 March 1918 were hit by the German Spring Offensive at the Battle of St Quentin. George was killed during the terrible fighting that followed, on 22 March 1918, aged 42. He is buried at Templeux-Le-Guerard British Cemetery, France, in Grave Ref. I.D.26. 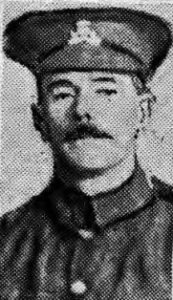 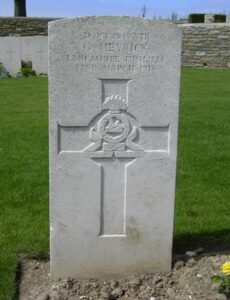 Daniel Arthur Peter, Company Sergeant Major, 200681, Welsh Regiment. Daniel was the son of William and Jane Peter, of 88, Priory Street, Carmarthen. Daniel joined the Talog Postal Staff in 1904. At the outbreak of war he enlisted into the 1/4th Battalion, Welsh Regiment, and fought throughout the Gallipoli and Palestinian campaigns with the battalion, which was attached to 159 Brigade, 53rd (Welsh) Division. After the cessation of hostilities, the 4th and 5th Welsh were merged to form the 4/5th Battalion, and remained on Garrison duties in the Middle East. Daniel was mysteriously killed by a gunshot wound on the night of 25 April 1919. A court of enquiry was held at Sidi Bishr. Daniel was 34 years old, and is buried at Alexandria (Hadra) War Memorial Cemetery, Egypt, in Grave Ref. C. 224. He is commemorated on the headstone of his sister Emily at Abergwili, who died on 8 November 1918. Many thanks to Bev Lewis for the photograph, and to Mark Collins for the details of Daniel’s death. 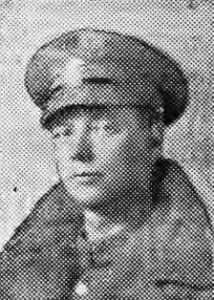 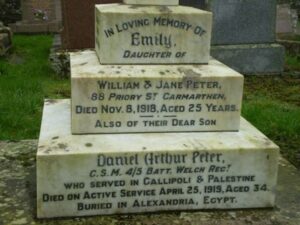 David John Richards, Private, 39507, Royal Welsh Fusiliers. David was the son of David and Elizabeth Richards, of 31, Priory Street, Carmarthen. He joined the Carmarthen Postal Staff in 1915, and enlisted at Cardiff on 25 January 1916 into the 22nd Battalion, Royal Welsh Fusiliers. On 29 August 1916 David sailed for Salonika aboard H.M.T. Arcadian, and was posted to the 11th Battalion, Royal Welsh Fusiliers, which was attached to 67 Brigade, 22nd Division. The Division had been in Salonika since November 1915. It remained in the theatre for the rest of the war, taking part in the Retreat from Serbia during December 1915. During August 1916 the Division fought at the battle of Horseshoe Hill, and in September 1916 at the battle of Machukovo. Between April and May 1917 the Division fought at the battle of Doiran, and then on 18 September 1918 at the Second Battle of Doiran. David was one of many casualties suffered by the Division at Doiran, being killed in action on 18 September 1918. He was 24 years old, and is buried at Karasouli Military Cemetery, Greece, in Grave Ref. B. 315. 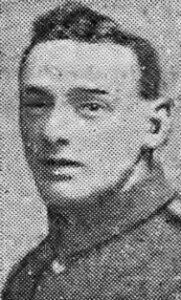 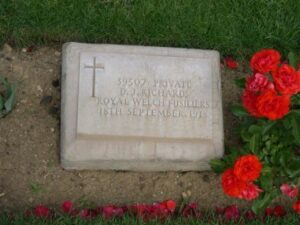 Gilbert Humphreys Rogers, Sergeant, 1382746, Royal Air Force Volunteer Reserve. Gilbert was the son of Herbert Rogers and Margaret Rogers (nee Humphreys), of 2, Tanerdy Lane, Carmarthen. He joined the staff of Carmarthen Post Office in 1937. Gilbert enlisted into the Royal Air Force Volunteer Reserve at the outbreak of war, and served with 75 (Royal New Zealand Air Force) Squadron, Royal Air Force. The Squadron was a Heavy Bomber unit, based at RAF Newmarket from November 1942, equipped with the Short Stirling. Gilbert was posted as missing in action when his Stirling was shot down on 5 May 1943. He was 27 years old, and is commemorated on Panel 163 of the Runnymede Memorial, Surrey.