The first railway station at Carmarthen was built in around 1852 to serve the South Wales Railway line from Swansea to Neyland. A second station was opened in 1860 to serve the Carmarthen and Cardigan Railway, although Cardigan was never reached and now none of the railways north of the town survive, apart from the privately run Gwili Railway. The railways around the town were later absorbed by the Great Western Railway, who maintained a large workforce in the town. Many men who worked for the GWR at Carmarthen left the town following the outbreak of the Great War to serve with the colours and, of these men, eight are known to have fallen in action. A memorial to commemorate these men has recently been unveiled in Carmarthen Station, as a result of the work of Simon Biggs, who came up with the idea of the memorial and managed to get together funding to create this new memorial. I had already researched all of the fallen Welsh GWR men, so when Simon contacted myself early on in the process of the planning, I was more than happy to supply the list of names and the research into the men to enable the memorial to be created. 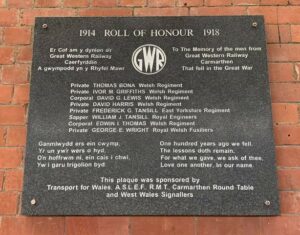 Thomas Bona, Private, 38147, Welsh Regiment. Thomas was born in 1892, the son of Thomas Bona and Ann Bona (nee Lewis), of Red Lion Yard, Carmarthen. He worked as a Blacksmiths Striker for the GWR at Carmarthen prior to the war. He enlisted in the town into the Royal Engineers but was discharged as medically unfit. He later enlisted into the 9th Battalion, Welsh Regiment during a recruiting meeting in Carmarthen. The battalion was attached to 58 Brigade, 19th (Western) Division and trained near Tidworth, from March 1915, before moving to France during July 1915, taking up positions near Loos.  The Division was positioned near Givenchy, to the north of the mining town of Loos and on 25 September 1915 was tasked with launching a diversionary attack, to draw German attention away from the main assault on Loos itself. It was during this charge that Thomas was killed. He was 23 years old and is commemorated on panel 77-78 of the Loos Memorial, France. 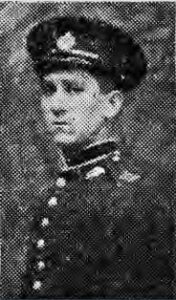 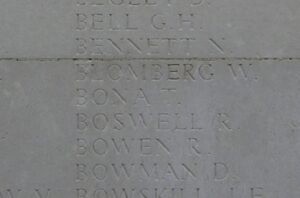 Ivor Monroe Griffiths, Private, 2252, Welsh Regiment. Ivor was born on 10 February 1896, the son of John and Hannah Griffiths, of Dryslwyn House, Parcmain Street, Carmarthen. He worked as an engine cleaner for the GWR at Carmarthen prior to becoming a fireman at the GWR Depot at Llanelli. He enlisted at Carmarthen into the 1/4th Battalion, Welsh Regiment, which was the local Territorial Battalion, attached to 159 Brigade, 53rd (Welsh) Division. The Division landed at Cape Helles, Gallipoli, on 9 August 1915, and was immediately thrown into action, spending the next few days in isolated pockets, fighting against a Turkish counter-attack during the Battle of Sari Bair, and then at the Attack on Scimitar Hill. Ivor became ill with enteric fever, and was brought by Hospital Ship to Alexandria, where he died on 28 October 1915, aged 19. He is buried in grave F. 14 in Alexandria (Chatby) Military and War Memorial Cemetery, Egypt. 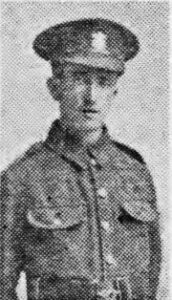 David Harris, Private, 201687, Welsh Regiment. David was the son of John and Rachel Harris, of Gelliwastod, Swansea. He worked in the Locomotive and Carriage Department at the GWR Depot at Carmarthen prior to the war, and enlisted at Carmarthen into the 1/4th Battalion, Welsh Regiment, which was the local Territorial Battalion, attached to 159 Brigade, 53rd (Welsh) Division. The Division landed at Cape Helles, Gallipoli, on 9 August 1915, and was immediately thrown into action, spending the next few days in isolated pockets, fighting against a Turkish counter-attack during the Battle of Sari Bair, and then at the Attack on Scimitar Hill. The Division remained here throughout the coming months, and suffered severe losses in manpower strength during the great November 1915 blizzard on Gallipoli, when its total strength was reduced to less than that of a full-strength Brigade. On 11 December 1915 the Division was evacuated to Mudros, and by 23 December 1915 were moved to Egypt. They remained on the Suez Canal Defences for the next twelve months, where it took part in operations against the Sultan of Darfur, and in March 1917 took part in the advance into Palestine. David became ill early into the expedition, and died of dysentery on 25 April 1917, aged 25. He is buried in grave A. 152 in Deir El Belah War Cemetery, Egypt. 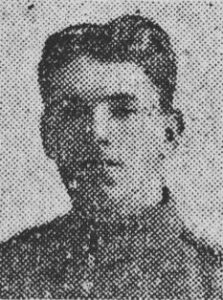 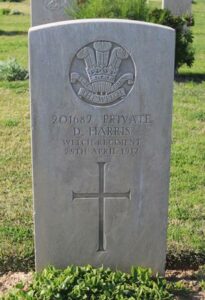 David George Lewis, Corporal, 19043, Welsh Regiment. David was born on 4 April 1887, the son of David and Ellen Lewis, of 83, Priory Street, Carmarthen. He had worked for the GWR at Carmarthen but left in 1906 to work for them in the Rhondda. He enlisted at Bargoed into the 13th Battalion, Welsh Regiment soon after the outbreak of war. The battalion trained at Rhyl, before moving to Winchester in 1915 as part of 114 Brigade, 38th (Welsh) Division, and the entire Division moved to France in the first week of December 1915. After several months familiarising itself with trench warfare in the Fleurbaix and Givenchy Sectors, the Division marched south to the Somme in June 1916. There it was tasked with the capture of the formidable fortified German positions at Mametz Wood. The division launched its first assault on the wood using a single brigade on 7 July 1916 but the attack was beaten off with severe casualties. Following the sacking of the Divisional Commander, Sir Ivor Philipps, the division attacked on a two-brigade front three days later. David was killed during heavy fighting on 10 July 1916, aged 29. His grave is one of a minority from the battle that was identified, and he is buried in grave IV. E. 5 in Flatiron Copse Cemetery, Mametz, France. 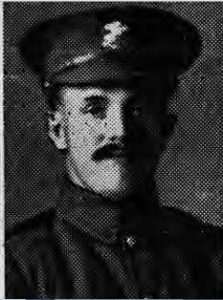 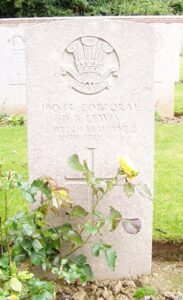 Frederick George Tansill, Private, 42156, East Yorkshire Regiment. Frederick was the son of George and Catherine Tansill, of 1, Towy Villa, Station Road, Carmarthen. He worked as a Painter’s Lad at the GWR Depot at Carmarthen prior to enlisting at Carmarthen into the army. He was posted to the 1/4th Battalion, East Yorkshire Regiment, which was attached to 150 Brigade, 50th (Northumbrian) Division. The Division had been in France since April 1915, and had fought at Ypres and on the Somme. During 1917 they fought at the Battle of Arras, then at Third Ypres. During March 1918 they were stationed near St. Quentin, and were hit here by the German Spring Offensive of 21 March 1918, taking part in a gallant rearguard action during the Actions at the Somme Crossings, and then at the Battle of Rosieres. After suffering terrible casualties, the Division moved north to Flanders to rest and rebuild, but in April the Germans launched an attack in Flanders, around the Lys, and the Division saw much fighting again. The battered Division was moved to a quiet sector on the Aisne to rebuild, but unfortunately the Division was hit hard by a surprise enemy attack, suffered heavy casualties yet again. Over the coming months the depleted division was forced to rebuild. Frederick was killed in action near Soissons on 8 September 1918. He was 19 years old, and is buried in grave B. 7 in St. Erme Communal Cemetery Extension, France. His elder brother William also fell. 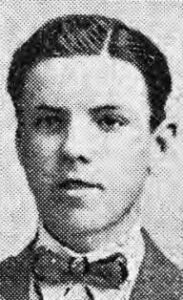 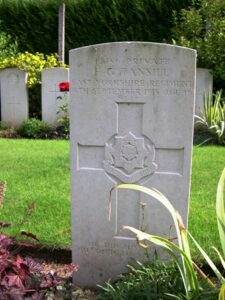 William James Tansill, Sapper, 448488, Royal Engineers. William was the son of George and Catherine Tansill, of Towy Villa, Old Station Road, Carmarthen. He worked as an Engine Cleaner at the GWR Depot at Carmarthen prior to the war. William enlisted at Carmarthen into the Welsh Field Company, Royal Engineers. The Company served at Gallipoli with the 53rd (Welsh) Division, before being evacuated to Egypt in January 1916, where it was renamed the 437th Field Company. It remained on the Suez Canal defences for a year, then in March 1917 took part in the advance into Palestine. William became ill and died of dysentery at No 17 General Hospital, Alexandria on 29 July 1917, aged just 22. He is buried in grave D. 163 in Alexandria (Hadra) War Memorial Cemetery, Egypt. His brother Frederick also fell. 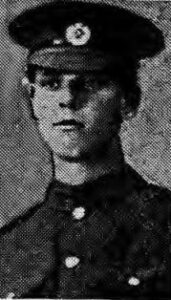 Edwin Isaac Thomas, Corporal, 200457, Welsh Regiment. Edwin was born on 2 May 1891, the son of John and Mary Thomas, of 52, Little Water Street, Carmarthen. He worked as a Time and Store Keeper at the GWR Depot at Carmarthen, prior to taking up the same position at their Llanelli Depot prior to the war. Edwin lived at 75, Priory Street, Carmarthen, with his wife and two young children. He enlisted into the 4th Battalion, Welsh Regiment, and served as a sergeant-instructor in a signalling section for several months, prior to going to Egypt in February 1917, where he joined the 1/5th Battalion, Welsh Regiment. The battalion was attached to 159 Brigade, 53rd (Welsh) Division, and was preparing for the advance into Palestine. Edwin was killed in action during the Third Battle of Gaza, on 3 November 1917. He was 27 years old, and is buried in grave C. 16 in Beersheba War Cemetery, Israel. 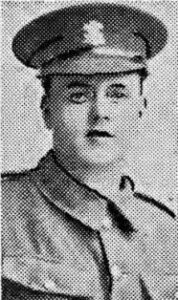 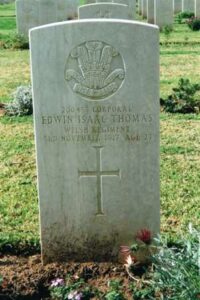 George Edgar Wright, Private, 355512, Royal Welsh Fusiliers. George was born at Leeds on 16 March 1888, the son of John Richard Wright and Isabella Wright. He worked for the GWR prior to the war, as a Blacksmiths Striker, in their Engineering Department at Carmarthen. He married Mary Louisa Jones at Carmarthen Methodist Chapel on 3 December 1915, and they lived at 10, Church Street, Carmarthen. George enlisted at Carmarthen on 15 January 1916 into the Montgomeryshire Yeomanry. They had been in Egypt since April 1916. George arrived there on 30 January 1917, just before they were merged with the Welsh Horse, to form the 25th Battalion, Royal Welsh Fusiliers. The new battalion was attached to 231 Brigade, 74th (Yeomanry) Division, and took part in the advance into Palestine. After fighting at the Battles of Gaza, and the capture of Jerusalem the Division was recalled to the Western Front, and arrived at Marseilles on 7 May 1918. George came home for two weeks leave before returning to the front. The Division then fought at the Second Battle of Bapaume during the great offensive, and fought in Flanders before returning to the Somme and fighting at the Battle of Épehy, as part of the offensive towards the Hindenburg Line. George was killed near Épehy on 18 September 1918. He is buried in grave B. 24. in Templeux-Le-Guerard Communal Cemetery Extension, France. 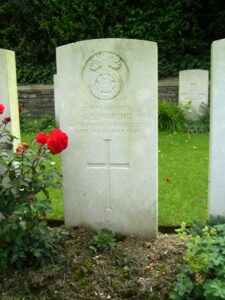