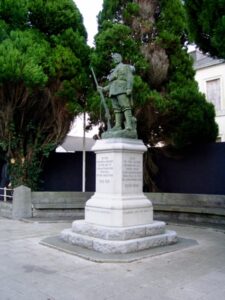 In May 1921, the Mayor of Carmarthen held a meeting to consider the question of a Borough War Memorial. The Lord-Lieutenant of Carmarthenshire had already suggested the idea of a County War Memorial. After much discussion, and many arguments, about the form and location of a War Memorial to commemorate the fallen of the County of Carmarthenshire during the Great War, it was decided that it should be built and installed in the County Town of Carmarthen, outside the front of the Priory Street Hospital. The eminent Welsh Sculptor Sir William Goscombe John was commissioned to create the Memorial in Bronze, and it was to sit on a Plinth of granite, with the simple inscription:

On Thursday, 4 September 1924 the Memorial was unveiled, following a Memorial Service at the nearby St. Peter’s Church, and a Procession led by the Guard of Honour of the 4th Welch. Colonel John Vaughan Campbell, VC, CMG, DSO, ADC had the honour of unveiling the War Memorial, in front of a huge crowd of thousands of bereaved families from the County, and the Ceremony was finished off by prayers, speeches and the Last Post Ceremony.

A Memorial booklet was published to commemorate the memory of the fallen of the Great War, and this held the names of the 1,913 fallen, which comprised of 3 Nurses, 123 Officers, 254 Non-Commissioned Officers, and 1,533 Other Ranks.

Since then, men of the County have fallen in World War Two and in later conflicts such as the Korean War. There are similar simple epitaphs now engraved on the sides of the plinth to commemorate the men of the County who fell in these wars.

The Names in the Memorial Booklet: