Capel Hendre is a small former mining village, situated about two miles west of Ammanford on the B4297 road. The only details of any war memorials in the village come from three names on the 1922 published Carmarthen County War Memorial roll, while there are WW2 war memorial gates in the village which have no names on, purely a plaque stating: ‘IN MEMORY OF THE MEN OF CAPEL HENDRE WHO LOST THEIR LIVES IN THE 1939-1945 WAR. REMEMBERED’. If there are any other war memorials in the village with names on, I would be very grateful for any photographs or details of them. 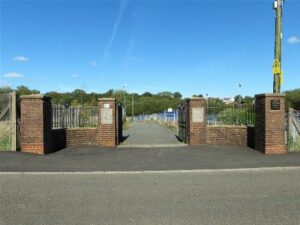 David Ching, Corporal, 91992, Royal Engineers. David was the son of William and Mary Ann Ching, of 5, Warberry Road West, Ellacombe, Torquay. After his father’s death in 1908, the family moved to Greenfield House, Capel Hendre. David worked as a miner prior to the war and enlisted at Ammanford into the Devon Regiment. He was later posted to the 255th Tunnelling Company, Royal Engineers. The company had formed in January 1916, and moved to Neuve Chapelle. It then moved to Souchez, and helped dig the famous Vimy subways in early 1917. Late in 1917 the Company was at Givenchy, and was forced to retreat during the German offensive on the Lys in April 1918. They then worked on defensive systems for the rest of the war. David was killed at Ypres by shrapnel on 28 September 1918. He was 18 years old, and is buried at Hagle Dump Cemetery, Belgium. 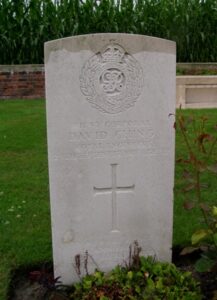 William John Griffiths, Private, 4054, Welsh Regiment. William was born at Talybont, Glamorgan, the son of William and Harriet Griffiths. The family later resided Capel Hendre and later at 24, Harold Street, Ammanford. He enlisted at Ammanford into the 1/4th Battalion, Welsh Regiment. William sadly died in Pembrokeshire before his Battalion sailed for the Mediterranean, on 9 February 1915. He was only 19 years old, and is buried at Cwmgerdennin (Gerizim) Welsh Baptist Chapelyard.

William Jenkins, Private, 13255, Royal Welsh Fusiliers. William was the son of Thomas and Emily Mary Jenkins, of Rock Terrace, Cross Hands. He lived at Capel Hendre prior to the war and enlisted at Ammanford into the 8th Battalion, Royal Welsh Fusiliers, which were attached to 40 Brigade, 13th (Western) Division. On 13 June 1915 the Division sailed for the Mediterranean, and in June 1915 the Divisional infantry landed on Cape Helles and relieved the 29th Division. They left and returned to Mudros at the end of the month, and the entire Division landed at ANZAC Cove from 3 August 1915, taking part in the Battle of Sari Bair. William was wounded here, and evacuated by Hospital Ship to Malta. He died of wounds aboard ship on 18 August 1915 aged 18 and is buried at Pieta Military Cemetery, Malta. His brother David James Jenkins was killed at Loos a year later, and is commemorated on the Cross Hands War Memorial. 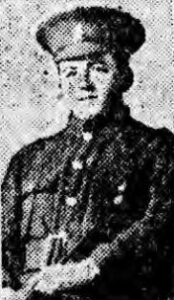 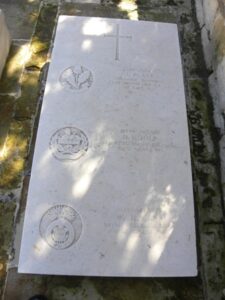 Willis George Martin, Private, 37850, Leicestershire Regiment. Willis was born at Whitfield, Northants, the son of David James Martin and Rebecca Mary Martin (nee Payne). He married in Mary Ann Gulliver in 1909, and the couple moved to Wales, first to Abersychan and then to Capel Hendre. Willis enlisted at Newport into the Glamorgan Field Company, Royal Engineers, but was later posted to the 8th Battalion, Leicestershire Regiment, which was attached to 110 Brigade, 21st Division. The Division had been in France since September 1915, and had fought at the Battle of Loos. In 1916 it fought on the Somme, and in 1917 at Arras and Ypres. The division was one of the units hit by the German Spring Offensive on the Somme in March 1918, fighting at the Battle of St Quentin, and it was here on 22 March 1918 that Willis was killed. He has no known grave, and is commemorated on the Pozières Memorial, France. (The county war memorial roll shows J. Martin of the Leicester Regiment, but this is the only man of the correct surname and regiment who had any ties with Wales). 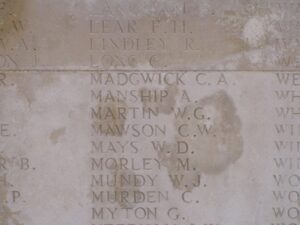 Thomas George Merchant, Private, 11143, Royal Welsh Fusiliers. Thomas was the son of William George and Margaret Jane Merchant, of Capel Hendre. He enlisted at Swansea into the 1st Battalion, Royal Welsh Fusiliers. The battalion was at Malta at the outbreak of war, and returned to join 22 Brigade, 7th Division. The Division was formed landed at Zeebrugge on 6 October 1914, however the City was already falling, and so they moved to Ypres, where they became the first British Division to hold the city. They fought during the First Battle of Ypres, and helped stop the German advance through Belgium. Thomas was wounded at Ypres, and was evacuated to Hospital at Wimereux. He died of his wounds there on 2 December 1914 aged 19, and is buried at Wimereux Communal Cemetery, France. 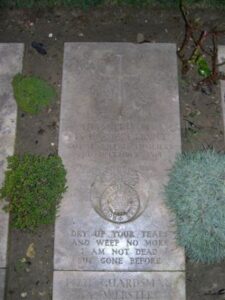