Situated at the Burry Port Memorial Hall, at Parc y Minos Street, is a memorial plaque to the Welshmen of the International Brigade who were killed during the Spanish Civil War. The Spanish Civil War was fought from 17 July 1936 to 1 April 1939 between the Republicans, who were loyal to the established Spanish Republic, and the Nationalists, a rebel group led by General Franco. Germany sent its Condor Legion to Spain to fight for the Nationalists, while International Brigades were formed to support the Republicans. Amongst the members of the International Brigade were many British men, who believed that they were fighting against Fascism. With the might of the Germans behind them, the Nationalists prevailed, and Franco ruled Spain until his death in 1975. 33 Welshmen gave their lives in the fight against Fascism, and the men are commemorated on this plaque. I have also added the places and dates where the men were killed, as well as two more Welshmen who are missing from the memorial. 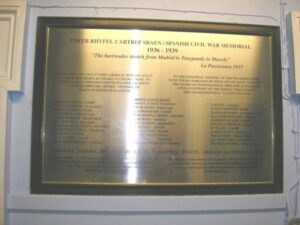 “The barricades stretch from Madrid to Tonypandy to Maerdy”

To the immortal memory of the Welshmen who with their comrades of Spain and of many nations in the rank of International Brigades gave their lives in support of the heroic struggle of the Spanish Republic against fascism.

This plaque was unveiled on 27th of February of 1997 by Evan Jones of Burry Port who served in the International Brigade during the conflict, returning home after being seriously wounded in the Battle of the Ebro.