Bethany Chapel at Burry Port was a Welsh Calvinistic Methodist Chapel, situated in New Street. Two members of the Chapel fell during the Second World War and were commemorated on a marble plaque inside the building. When the Chapel was closed down, the memorial was relocated and is now to be found in Bethel (Welsh Calvanistic Methodist) Chapel, Gwscwm Road, Pembrey. The photograph of the memorial has been kindly supplied by Mr Wynford A. Davies, and reads (in Welsh):

They shall not be forgotten 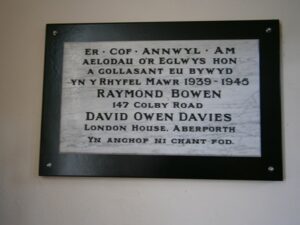 Raymond Bowen, Able Seaman, D/JX 188772, Royal Navy. Raymond was born at Burry Port on 10 February 1918 and lived at 147, Colby Road. He served aboard HMS Thanet, which was an S-Class destroyer, which had been commissioned after WW1. At the outbreak of WW2 she was on the China Station, and served in the Pacific, carrying out minelaying around Hong Kong. On the morning of 26 January 1942, Thanet along with HMAS Vampire was ordered to go to Endau on the east coast of Malaya where it had been reported that Japanese forces were landing. What was not reported was that there was a large fleet of Japanese warships assisting the landing. Thanet and Vampire went in, but within minutes Thanet had been hit by torpedoes and gun fire and she sank. A number of men escaped and made their way overland to Singapore, but were apparently executed that day by the Japanese. It is not known if Raymond was with those men who escaped, but he is recorded as having died on 26 January 1942, and is commemorated on the Plymouth Naval Memorial, Devon.

David Owen Davies, Able Seaman, D/JX 214757, Royal Navy. David was the son of John Thomas Davies and Martha Davies, of London House, Aberporth. He served with the Royal Navy at HMS President III. Edward had been posted aboard the steam merchant ship Erna II as a DEMS Gunner. He was killed when Erna II was torpedoed and sunk by the German submarine U-562 on 25 September 1941, while en-route from Swansea to Montreal. David was 21 years old, and is commemorated on the Plymouth Naval Memorial, Devon. He is also commemorated on the Aberporth War Memorial and at Yr Hen Gapel, Llanbrynmair, Powys. For some reason the CWGC incorrectly show him as Edward Owen Davies, but all other records show that he is definitely David Owen Davies.