Brechfa is an ancient village, situated at the top of the Cothi Valley, about 12 miles north-east of Carmarthen. The village is surrounded by Brechfa Forest, once a famous stage of the World Rally Championship, but is now more well known for its mountain bike tracks. The 1922 published Carmarthen County War Memorial roll named one casualty from Brechfa who fell during the Great War. I have no photographs of memorials from the village to check the accuracy of the roll, so any photographs would be most welcome.

Evan Henry Davies, Trooper, 1766, Australian Imperial Force. Evan was the son of Thomas and Margaret Davies, of Tygwyn, Nantyffin, Brechfa. He had emigrated to Australia prior to the war, and worked at New South Wales as a labourer. Evan enlisted into the 2nd Light Horse at Sydney on 10 January 1916. Evan arrived in Egypt in June 1916, and was posted to the 12th Light Horse, which was attached to the 4th Australian Light Horse Brigade. Evan took part in the advance into Palestine from March 1917 onwards, where the Light Horse built a strong reputation for itself. He survived the war, but became seriously ill in December 1918, being given 14 days leave to recover. Evan became worse though, and died of influenza and malaria in hospital at Cairo on 12 January 1919, aged 28. He was buried by Reverend J. H. MacGoun at Cairo War Memorial Cemetery, Egypt the same day. 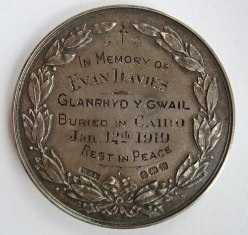