Ysgol Dyffryn Aman is located at Margaret Street, Ammanford, and is the successor of the old Amman Valley County School. The school was opened in 1914, just prior to the outbreak of the Great War, and in its first year was attended by just 157 pupils. Despite their youth, twenty five former pupils of the original County School served in the forces during the war, one of whom lost his life, so soon after the end of hostilities the school saw fit to erect a marble war memorial in order to commemorate the service of these young men. This memorial is now located inside Ysgol Dyffryn Aman. The photograph of the memorial was kindly supplied by Rachel Evans, a teacher in the school, who has recently carried out a research project alongside some of her pupils. 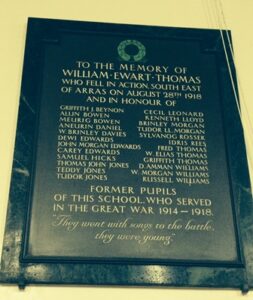 TO THE MEMORY OF

WHO FELL IN ACTION SOUTH EAST

AND IN HONOUR OF

OF THIS SCHOOL WHO SERVED

“They went with songs to the battle.

William Ewart Thomas, Private, 94324, Kings Liverpool Regiment. William was the son of John and Annie Thomas, of Amman Stores, Ammanford. He enlisted at Llandeilo into the 9th Battalion, King’s Liverpool Regiment, which was a service, or war time only, battalion, attached to 172 Brigade, 57th (2nd West Lancs) Division. The Division moved to France during February 1917, and moved to positions near Ypres, where it took part in the Second Battle of Passchendaele. In 1918 they took part in the 1918 Battle of the Scarpe, and at the Battle of Drocourt-Queant. William was killed in action near Arras on 28 August 1918, aged only nineteen. He has no known grave, and so is commemorated on the Vis-En-Artois Memorial, France. 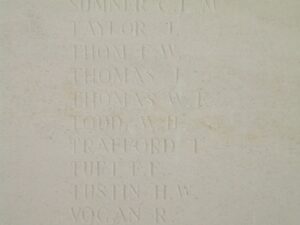 There is a varied amount of information available for the men who served and survived the war. I have left the research on these men to the pupils at Ysgol Dyffryn Aman who have recently published their findings.