Abernant is a small village situated four miles north-west of Carmarthen. I have no photographs of any war memorials in the area, but the 1922 published Carmarthen County War Memorial Roll named two men from the village who had fallen during the Great War, T. Griffiths and J. H. Phillips. I have also discovered another man from the village who had emigrated to Canada, and fell while serving with the Canadians. I have a photograph of the memorial inside the Church for J. H. Phillips, but is there anything else located there? Any photographs of local memorials would be most welcome.

Thomas Davies, Private, 234845, Canadian Infantry. Thomas was born on 25 November 1884, the son of Samuel and Rachel Davies, of Blaenbran, Trawsmawr, Carmarthen. He emigrated to Canada prior to the war, and enlisted at Brandon, Manitoba, on 26 April 1916 into the 52nd Battalion (North Ontario), Canadian Infantry, which was attached to the 9th Canadian Brigade, 3rd Canadian Division. Thomas would have joined the battalion in France late in 1916, after the Somme battles. He would have fought in the famous Canadian victory at Vimy Ridge in April 1917. Thomas was killed later that year, during the capture of Cinnabar Trench, near Arras, on 3 September 1917. He was 32 years old, and is commemorated on the Vimy Memorial, France. 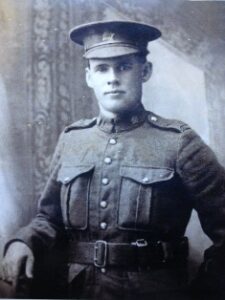 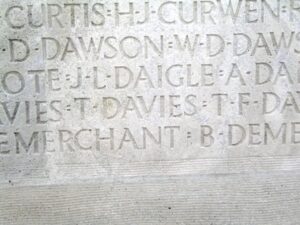 Thomas Griffiths, Private, 12071, South Wales Borderers. Thomas was the son of Mrs. Anna Griffiths, of Penrheol, Abernant. He enlisted at Llanelli into the 2nd Battalion, South Wales Borderers. The battalion had fought in China at the outbreak of war, before returning to Britain to join 87 Brigade, 29th Division. It took part in the Gallipoli landings on 25 April 1915, and remained there until evacuation in January 1916. The Division took part in its first major action in France during the 1916 Somme Offensive, and fought at the Battles of Albert and Le Transloy, suffering heavy casualties. In the Spring of 1917 they fought at the Battle of the Scarpe, which was part of the Arras Offensive, and then moved further north to Ypres. Here they fought at the Battle of Langemarck, and then at the Battles of the Menin Road, Polygon Wood, Broodseinde and Poelcappelle, before moving to Cambrai. Here they fought at the Battle of Cambrai, which is where Thomas was killed on 21 November 1917. He was 20 years old, and is buried at Marcoing British Cemetery, France. 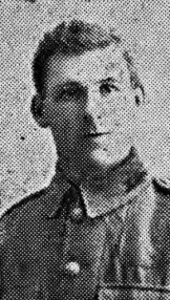 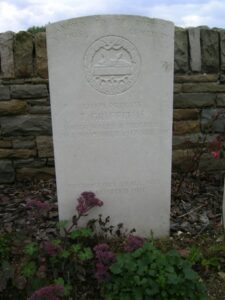 James Howell Phillips, Private, 320314, Welsh Regiment. James was the Son of John and Anne Phillips, of Ysgerfa, Talog Road, Abernant. He enlisted at Carmarthen in September 1914 into the Pembroke Yeomanry, which moved to Norfolk as part of the 1st Mounted Division, before sailing for Egypt in March 1916. After twelve months on the Suez Canal Defences, the Pembroke and Glamorgan Yeomanry merged to form the 24th Battalion, Welsh Regiment, and were attached to 231 Brigade, 74th (Yeomanry) Division. The division took part in the advance into Palestine from March 1917, and fought at the Second and Third Battles of Gaza. James was killed during the attack on the Sheria heights on 6 November 1917. He was 23 years old, and is buried at Beersheba War Cemetery, Israel. 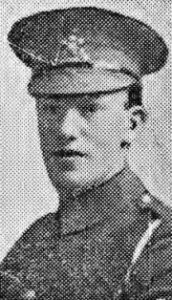 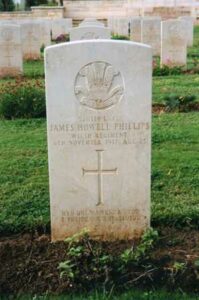